It’s usually not easy to determine what business a company is involved in if its name only consists of three letters. Ask a random stranger in the street what PVH Corp. (PVH) does, and very few will be able to tell you it’s a company that owns brands like Tommy Hilfiger and Calvin Klein while having a perpetual license for Speedo products in North America and the Caribbean (which is being sold for $170M at this moment). Most of the brands are household names and enjoy excellent scores on brand recognition and the perceived quality, but the company name is a bit inconspicuous.

The total revenue of PVH in the first nine months of the year increased by approximately 2% to $7.31B, but as the COGS increased at a faster pace of in excess of 3%, the gross profit increased by just 1% to $3.99B. 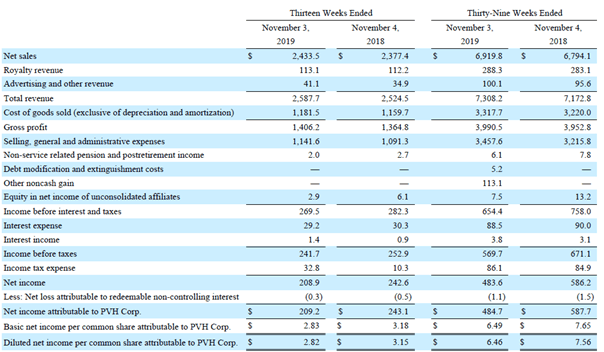 There also was some pressure on the SG&A front as those expenses increased by over 7%, and despite recording a $113M non-cash gain, the EBIT fell by in excess of 13% to $654M. This was predominantly an issue in the first half of the year as even excluding the non-recurring gain (which was recorded in H1 FY 2020), the Q3 EBIT fell by just over 4%, indicating the situation is not as tough as one would think.

Despite the decent performance in the third quarter, the 9M results still look pretty weak with a net income of almost $485M or $6.49 per share. And that’s definitely decent given the bumpy situation of the world economy in 2019. 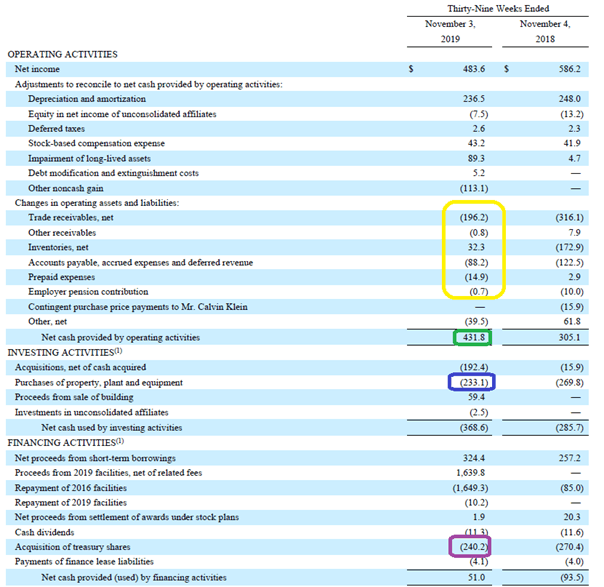 The cash flow results appear to be even more encouraging. PVH reported an operating cash flow of $432M, but this includes a substantial (albeit lower than last year) investment in the working capital position to the tune of $266M, but excludes a $4M lease payment. On an adjusted basis, this means PVH’s operating cash flow was around $694M, and after deducting the capex of $233M, PVH’s free cash flow result in the first nine months of the year was approximately $461M or $6.32 per share. Considering the capex of $233M is in line with the $237M in depreciation expenses (including lease-related liabilities), I do believe this is a fair representation of the underlying situation.

What about the dividend?

PVH has been paying a symbolic dividend of just $0.15 per year per share, giving it a current dividend yield of just around 0.20%. Needless to say, PVH isn’t exactly a stock that appeals to dividend investors.

Rather than paying a dividend, PVH is an avid buyer of its own stock. In the first nine months of the year, PVH has spent approximately $240M on buying back stock (of which almost $2M was funded through the incoming cash from option exercises). 25,000 options with an average strike price of $78.56 were exercised, so the dilutive effect of the option exercises remained limited given the relatively small discount versus the current share price.

A total of 2.4 million shares were repurchased during the first nine months of the year, and this means there was an additional $785M available under the 2015 approved $2B share repurchase program. As PVH’s share price has been sliding lately, I am looking forward to see if this has resulted in an accelerated pace of repurchasing the shares. The current share count reported on December 2nd was just below 73M shares, and I expect to see PVH diving below the 70M shares by next summer.

On top of repurchasing its own stock, PVH also pursues smaller acquisitions. In July, for instance, it purchased the Central and Southeast Asia retail business of Tommy Hilfiger as a licensee for $74M (including just over $10M in goodwill), while it also acquired the 78% of Gazal Corporation it didn’t already own, giving the company full ownership of PVH Australia which has the rights to Tommy Hilfiger, Calvin Klein and Van Heusen in that geographical area.

PVH’s performance remains strong with good free cash flow results, but we will have to wait to see what impact for instance the coronavirus has had on the Q4 results, which might be a tad weaker than what you’d expect. No need to panic though as Asia accounts for less than 15% of PVH’s consolidated sales. Despite this, PVH remains an interesting company to gain exposure to the higher-end clothing industry.

I appreciate the company’s approach of applying a blend of dividends, stock buybacks and smaller bolt-on acquisitions, and given the strength of the balance sheet (the net debt excluding lease liabilities was $2.6B as of the end of the third quarter for a debt ratio of around 2), PVH should be able to continue to deliver for its shareholders.

I currently don’t have a long position in PVH, but will be trying to write one or two out-of-the-money put options in my personal portfolio.

Take advantage of the TWO WEEK FREE TRIAL PERIOD and kick the tires!

Disclosure: I/we have no positions in any stocks mentioned, but may initiate a long position in PVH over the next 72 hours. I wrote this article myself, and it expresses my own opinions. I am not receiving compensation for it (other than from Seeking Alpha). I have no business relationship with any company whose stock is mentioned in this article.