Today, we will see why Provention Bio (PRVB) is a promising pick in 2020.

Provention Bio is on the cusp of transformation, from clinical stage-biopharmaceutical company to a commercial organization. The company is focused on upstream pathways in T cell or B cell biology to intercept and prevent immune-mediated diseases. The company aims to help patients before they suffer long-term tissue damage.

Provention Bio’s lead asset, Teplizumab (PRV-031), can prove to be a paradigm change in T1D (type 1 diabetes). The company is also studying another investigational asset, PRV-1010, for the prevention of T1D. Besides, Provention Bio’s research pipeline also comprises investigation assets, PRV-3279 being evaluated in SLE and for prevention of immunogenicity. The company is also studying PRV-015 in celiac disease and PRV-6527 in Crohn’s disease.

There is significant unmet demand in T1D indication.

According to Provention Bio’s estimates, there are 40,000 newly diagnosed T1D patients each year in the U.S. and about the same number in Europe. Recognizing these patients is relatively easy, considering that they are immediately referred to pediatric endocrinologists for life-saving insulin therapy. However, despite the intervention, 40% to 50% suffer from life-threatening DKA (diabetic ketoacidosis). There are over 160,000 hospitalizations associated with DKA every year in the U.S. T1D is thus associated with a significant burden for the patients, caregivers, payers, and overall healthcare system.

In a recently published whitepaper, The JDRF T1D Fund, JDRF, and Health Advances have estimated the number of people living with clinically diagnosed Stage 3 T1D globally to be 18 million. The paper estimates the number of pre-symptomatic Stage 1 and Stage 2 T1D patients to be an additional 2.3 million. Of these, at least 300,000 are in the U.S. The whitepaper has pointed out the annual economic burden of T1D in the U.S., which includes both direct and indirect costs, to be $30 billion. Less than 40% of these expenses are associated with direct costs. While the research has highlighted the capability of T1D cures to alleviate the $30 billion economic burden, it has also assessed the annual value of disease-modifying therapies in this indication to be $3.0 billion. 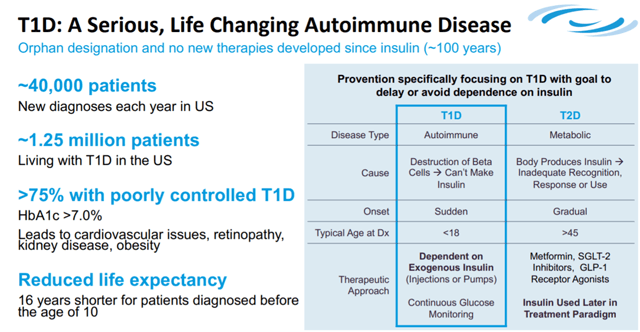 T1D is a T cell-mediated autoimmune disease caused by the destruction of beta cells in the pancreas. Here, autoreactive CD4+ and CD8+ T lymphocytes, as well as other immune cells, play a role in the development of T1D.

Currently, T1D patients are treated with intensive daily exogenous insulin and continuous glucose monitoring. Despite this, the disease remains poorly-controlled in 75% of the patients resulting in short-term and long-term serious complications. T1D patients diagnosed under the age of 10 years have 16 years lower life expectancy than the average population.

How does Teplizumab work in T1D patients?

Teplizumab, a humanized anti-CD3 monoclonal antibody, works by reducing autoimmune destruction of pancreatic β-cells. It binds to the CD3 co-receptor and eliminates the autoreactive T cells responsible for the destruction of insulin-producing beta cells.

In June 2019, Provention Bio announced positive top-line results from NIH (National Institutes of Health) sponsored Phase 2 “At-Risk” Study, evaluating Teplizumab’s capability to delay or prevent the onset of T1D in at-risk patients. The results from this study have validated the company’s founding investment hypothesis based on the use of immunotherapy to intervene in the autoimmune process underlying the tissue damage and the symptoms associated with end-stage disease. Provention Bio estimates the U.S. prevalence of presymptomatic T1D patients to be 120,000 to 200,000 individuals and a similar number in Europe.

The At-Risk study enrolled 76 patients in the age group of 8 to 49 and at risk of developing T1D. These patients were screened based on the presence of two or more T1D autoantibodies and abnormal glucose metabolism. 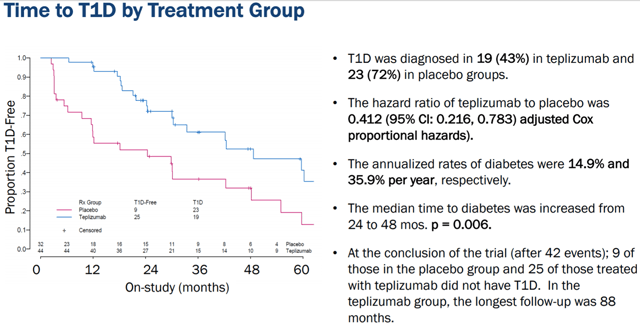 It was seen that a single 14-day course of teplizumab managed to delay the onset of disease in these patients by a median of at least two years as compared to placebo. While the median patients on placebo developed T1D in two years, the median Teplizumab treated patients who developed the disease in four years. Besides, 43% of teplizumab treated subjects developed T1D, much lower than 72% of those receiving placebo. Hence, the drug managed to not only delay the disease but also prevent it in some at-risk T1D patients.

Based on these highly statistically significant and clinically relevant results, FDA has agreed to allow the company to file for a BLA filing for Teplizumab to prevent or delay T1D in subjects with two or more autoantibodies and dysglycemia or abnormal blood sugars. In August 2019, FDA granted BTD (Breakthrough Therapy Designation) to teplizumab for prevention or delay of T1D in at-risk patients.

In December 2019, Provention Bio announced the completion of a Type B multidisciplinary meeting with the FDA to discuss the proposed contents of a BLA for teplizumab in at-risk T1D indication. The company now expects to commence a rolling BLA submission for Teplizumab in the middle of 2020 and completion of the submission in the fourth quarter of 2020.

In October 2019, EMA granted PRIME (PRIority Medicines) designation to Teplizumab for the prevention or delay of clinical T1D in individuals at risk of developing the disease. Provention Bio anticipates Teplizumab’s approval in Europe in 2021. Provention Bio is also developing a robust commercial strategy for Teplizumab.

Provention Bio will first focus on at-risk patients who have a close relative with clinical-stage T1D. This highly accessible familial opportunity accounts for around 15% of the total at-risk population with two or more autoantibodies and dysglycemia in the U.S. The company has estimated the number of highly accessible at-risk subjects in the U.S. that can be targeted immediately by teplizumab to be around 10,000. Assuming pricing for Teplizumab similar to those of other orphan drugs or rare disease drugs, the company expects the addressable U.S. market opportunity for Teplizumab to easily cross $1.0 billion.

Besides the familial opportunity, the company plans to increase the adoption of Teplizumab by exploring potential partnership opportunities in areas such as pediatrics, diabetes, or public health. This can further increase the diagnosis of at-risk T1D patients, thereby expanding the addressable market opportunity.

Provention Bio is also evaluating Teplizumab in newly diagnosed T1D patients in the pivotal Phase III PROTECT study. The company is enrolling 300 insulin-dependent patients, aged eight to 17 within six weeks of initial diagnosis in this study. The company expects enrolment to complete by the end of 2020.

Provention Bio will be evaluating the efficacy and safety of two 12-day courses of Teplizumab, administered six months apart, as compared to placebo in newly diagnosed T1D patients. 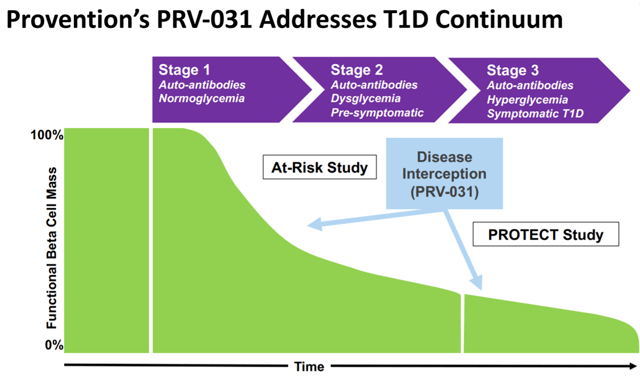 Besides, Provention Bio also plans to evaluate the potential of redosing teplizumab to extend the delay of T1D progression for at-risk individuals. While the At-Risk study evaluated only a single 14-day course of teplizumab, the company aims to assess how clinical-stage T1D can be delayed or prevented by additional courses of therapy. The company will use predictive biomarkers to determine the timing of drug redosing.

The company also plans to assess the efficacy and safety of Teplizumab in at-risk and newly diagnosed T1D patients under the age of eight. This age group accounts for almost one-third of childhood-diagnosed diabetes patients. Finally, Provention Bio also plans to assess the efficacy of teplizumab as a foundational therapy in combination regimens. The company plans to study Teplizumab in combination with antigens, metabolic medications, beta cell transplantation or other immunomodulatory agents.

Finally, Provention Bio is considering resuming the development of subcutaneous teplizumab formulation, which can prove to be a more convenient administration method for patients. This can also make it easier for the company to evaluate Teplizumab in other autoimmune conditions driven by activated T cells.

The company also has other promising assets in its pipeline.

In August 2019, Provention Bio commenced Phase 1b/2a clinical trial evaluating a bispecific scaffold biologic molecule targeting the B-cell surface proteins, CD32B and CD79B, PRV-3279, in SLE (systemic lupus erythematosus) indication. The company is now awaiting top-line safety results from the Phase Ib multiple ascending dose parts of this trial in the first quarter of 2020. The company then plans to commence Phase IIa part of the study in lupus patients in 2020. The company is also studying PRV-3279 in preclinical trials for the management of clinically relevant immunogenicity associated with gene therapies and certain therapeutic proteins.

Investors should consider these risks.

Provention Bio is a clinical-stage company with no revenues and earnings. The company growth prospects depend heavily on the clinical and commercial success of Teplizumab in T1D indication. While the pipeline is significantly derisked, there always remains some R&D failure risk for a clinical-stage company. The company is also exposed to regulatory risk and market uncertainty associated with uptake of Teplizumab post-approval.

Provention Bio also faces the risk of losing lucrative partnerships. In October 2019, Provention Bio reported discouraging top-line results from Phase 2a PRINCE trial, evaluating its investigational oral CSF-1R (Colony Stimulating Factor-1 Receptor) small molecule inhibitor, PRV-6527, in Crohn’s disease indication. In December 2019, the company filed 8-K informing that Janssen Pharmaceuticals (JNJ) was not interested in buying back rights of PRV-6527. Provention Bio is not interested in continuing the development of this product directly and is considering sublicensing it to another party. While not much of the valuation is associated with this asset, it definitely reduces the number of growth catalysts for the company in the coming years.

At the end of September 2019, Provention Bio had cash worth $95.1 million. The company’s cash-based expenses in the first nine months of 20-19 were $31.9 million. The company expects its cash to sustain its operations into the second half of 2021. Subsequently, the company may have to opt for dilutive financing or debt.

What price is right for the stock?

According to finviz, the 12-month consensus target price of Provention Bio is $22.88. On January 24, Cantor Fitzgerald analyst Alethia Young initiated coverage for the stock with an “Overweight” rating and a $25 target price. On December 30, H.C. Wainwright analyst Raghuram Selvaraju reiterated the “Buy” rating and set target price at $20. 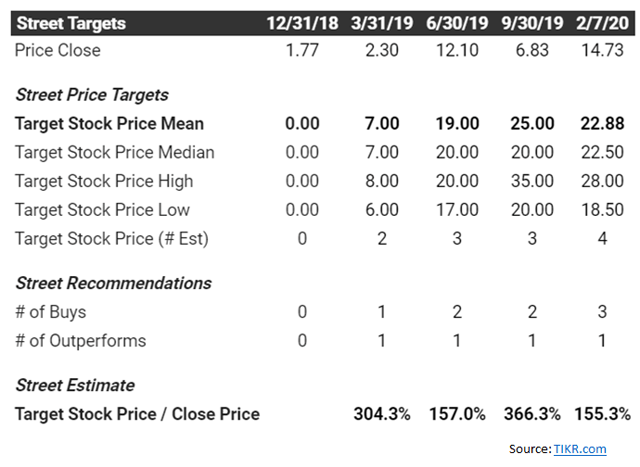 The above table highlights the change in analyst recommendations and target price for the stock since December 2018. 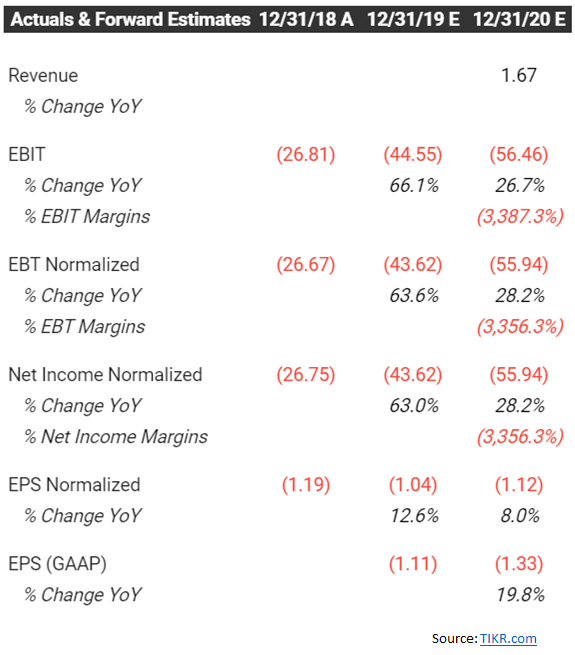 Analysts expect the company to start earning revenues in 2020. They, however, also expect losses to increase due to rising regulatory and commercialization-related expenses in 2020.

In this backdrop, I believe the target price of $20.0 is a likely estimate of the company’s share price after 12 months. The company’s pipeline is relatively derisked. Hence, I recommend investors with above-average risk appetite to consider this stock in 2020.