Not surprisingly, Proofpoint (PFPT) reported another strong quarter with revenue, margins, and EPS all coming in ahead of expectations. Management provided 2020 guidance that was strong than expected, yet the stock initially traded down. However, over the past week, the stock has since recovered as investors realized the consistency and long-term growth of the company.

Q4 revenue came in ahead of both management’s guidance and consensus expectations. Operating margins continued to expand, with Q4 margins expanding 100bps compared to the year ago period, leading to another quarter of EPS beating expectations. In addition, the company continues to generate strong cash flow margins of ~15-20%.

Management also provided 2020 guidance with revenue of $1,060-1,067 million, which was ahead of expectations for $1,060 million at the midpoint. With continued operating margin expectations and strong free cash flow, investors have a lot to look forward to in 2020 and beyond.

The company has seen a choppy stock price over the year as investors try to decide the best valuation for a 20% revenue growth company with expanding operating margins. While revenue growth is not likely to accelerate meaningfully anytime soon, the margin expansion and consistent cash flows should provide a floor for valuation.

Even though the stock currently trades at ~6.6x 2020 revenue, if we are to assume revenue comes in at the midpoint and grows another 20% in 2021, valuation starts to look more attractive at ~5.4x.

Q4 revenue grew an impressive 23% to $243.4 million, which was well above management’s previous guidance range of $237.5-239.5 million as well as consensus expectations for $239 million. Revenue growth has been very consistent over the past several quarters and continues to remain above 20%.

Billings growth during the quarter grew an impressive 29% to $347.2 million, which was ~2% above expectations for ~$342 million. After the Q3 earnings release, management guided Q4 billings of ~$340 million, which was a little light of expectations. While this caused some investors to be concerned, the big Q4 earnings likely wiped away concerns that the company could be experiencing some slowdown. 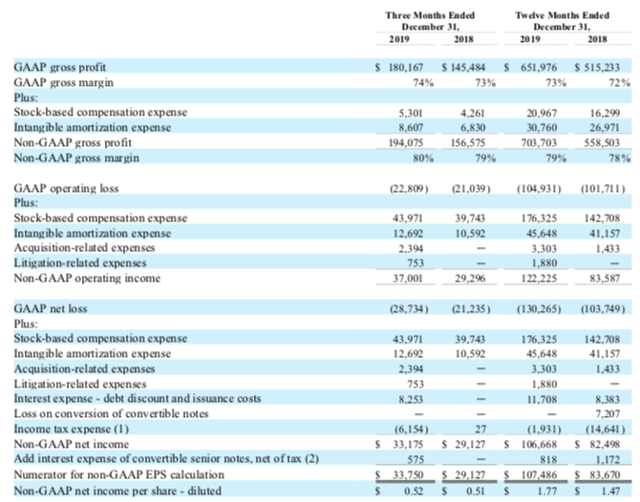 Given the company’s highly recurring subscription software business, gross margins continue to remain healthy at 80%. I believe even over the longer term, gross margins are likely to remain in the high-70’s to low-80’s range given the naturally higher margins of software revenue.

The combination of better than expected revenue and strong margin expansion led to EPS during the quarter of $0.52, which was $0.05 more than consensus expectations for $0.47. 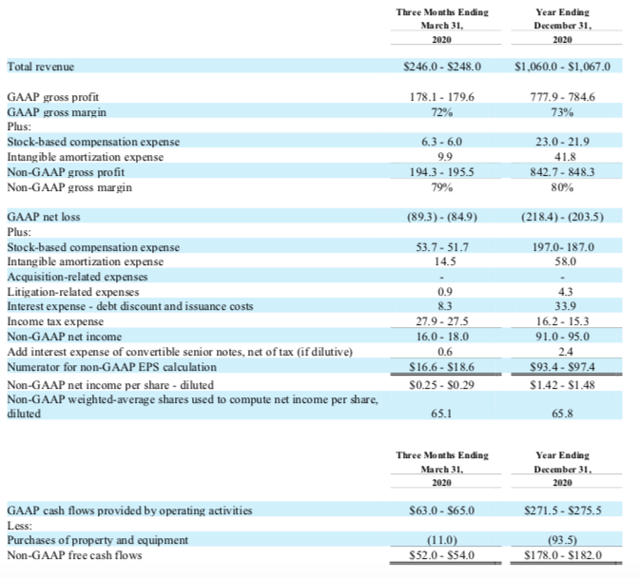 While revenue growth is expected to be ~20% for 2020, I believe the company will continue on their pattern of consistently beating guidance and raising expectations. Even after the strong Q4 results and 2020 guidance coming in ahead of expectations, the stock initially traded down ~4% after earnings, however, the stock has since recovered.

The company also generates strong free cash flow with 2020 expectations of FCF >15% of total revenue. Combined with continued strong revenue growth and margin expansion, it is no surprise that the stock trades at a premium multiple.

Even though the company can be considered a little more mature given revenue growth of ~20% is lower than faster-growth software companies, PFPT’s stronger margins and cash flow give investors more confidence in the longer-term projection of the company.

With management’s revenue guidance of $1,060-1,067 million representing ~20% growth at the midpoint, I believe the company will continue on their beat and raise pattern, potentially ending the year closer to 23-25% revenue growth.

The company has a current market cap of ~$7.15 billion and with cash/investments of ~$890 million and debt of ~$750 million, they have a current enterprise value of ~$7.0 billion. Using management’s 2020 revenue guidance at the midpoint, this represents a 2020 revenue multiple of ~6.6x.

I believe the company has the potential to continue to grow revenue 20%+ for another year or two, which should give investors more confidence in PFPT’s current multiple relative to peers. Even if 2020 revenue comes in at the midpoint and grows another 20% in 2021, this would represent 2021 revenue of ~$1.3 billion, representing a 2021 revenue multiple of only ~5.4x.

If PFPT is able to put together another solid year of revenue growth and profitability while displaying their historical beat-and-raise pattern, I believe the stock remains a great long-term investment at the current valuation.