Here’s my advice on Progress Software (PRGS): try not to think of this company as a tech stock. You’ll be disappointed when you look at the company’s growth rates and its legacy technology (Progress Software focuses on PaaS, which is technology tools that help developers build other applications) versus faster-growing SaaS peers.

But if you think of Progress as more of an industrial concern – one with a very stable, recurring revenue base and gradually lifting margins, as well as steady profits and cash flow – then it’s fully possible to appreciate this value stock.

Shares of Progress Software dipped ~5% after reporting fiscal third-quarter results, despite what I believed to be a relatively strong print:

With value-oriented tech stocks being such a rare breed in today’s market, I think there’s plenty to like about Progress Software:

So against next year’s EPS consensus, Progress Software trades at a very modest 11.1x FY21 P/E ratio. That’s not just a discount to tech stocks – that’s a discount to the broader market. One more note to add: though Progress Software’s revenue growth is only in the single digits, its pro forma operating margin is ~40% – so technically, Progress Software would pass the “Rule of 40” test that is often applied to growth SaaS stocks (many of which “fail” this test because there loss margins are so excessive).

To me, given Progress Software’s cheap valuation and passable ~2% yield, I think the stock makes for a good defensive, safe play in the tech sector. 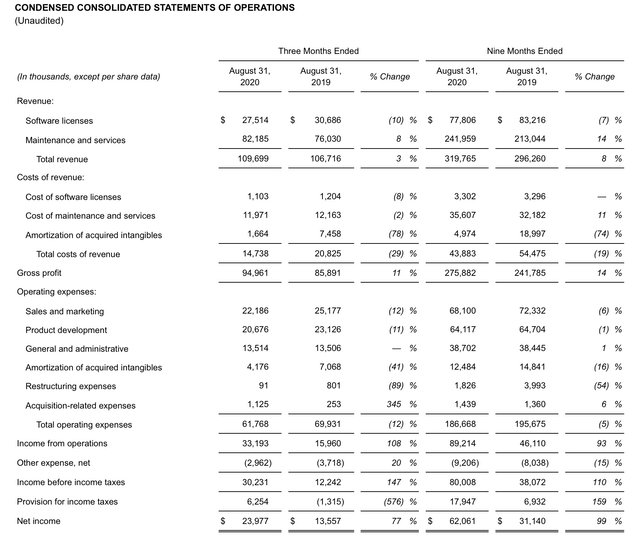 Progress Software’s revenue grew 3% y/y to $109.7 million. Note here that the company actually saw accelerated growth versus flat performance in Q2. We note that on a pro forma basis, which excludes the impact of deferred revenue adjustments in recent acquisitions, revenue contracted by -4% y/y – but Progress’ CFO noted that renewal timing skews this metric and makes it lumpy. The company still noted that its $110.9 million in pro forma revenue was ~$2 million above the high end of its guidance range.

Note as well that Progress expects this strong performance to sustain into Q4, primarily due to the contribution of a recent $220 million acquisition called Chef, an automation platform for software developers. The transaction is expected to close in October, and start contributing to Progress’ results midway through its fiscal fourth quarter ($10-$12 million in total expected contribution for Q4). The high end of the company’s $125-$129 million revenue range (on a pro forma basis) would imply 5% y/y growth. Overall, Chef is currently running at ~$70 million in annualized revenue – which would boost Progress’ scale by roughly 15%. The Chef acquisition is also expected to enrich Progress Software’s recurring revenue mix (currently at 80%) by another two points.

Looking ahead to next year, Progress CFO Anthony Folger also gave some directional pointers on FY21 without giving explicit guidance. Key among them is that he expects Chef to drive double-digit revenue growth for the company overall, while the company’s organic growth will be roughly flat. Per his remarks on the Q3 earnings call:

To summarize a few directional measures for fiscal 2021, we anticipate double-digit revenue growth to be driven by a full year’s contribution from Chef, while our remaining businesses continuing to demonstrate their stability and net outlook to be flat on a year-over-year basis. In addition, we believe we can maintain an operating margin in the high-30s.”

We also continue to be encouraged by Progress Software’s cost discipline. As seen in the earnings table above, sales and marketing costs and product development costs declined by -12% y/y and -11% y/y, respectively. This allowed Progress Software to boost its pro forma operating margins to 42%, two points richer than 40% in the year-ago quarter. 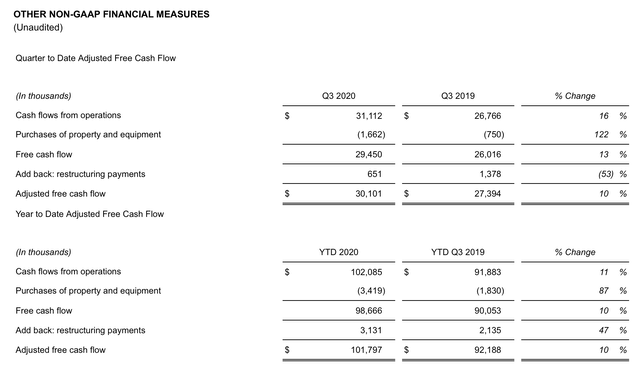 With annual cash flows currently in the ~$140 million range (Progress has guided to $135-$140 million for the full FY20), the way I’d think about Progress’ earnings and growth potential is that the company is generating enough cash to pursue a nearly-Chef-sized acquisition every year and boost its scale by double-digits. As long as these acquisitions ramp up to become earnings-accretive relatively quickly, this is a plausible growth strategy (and one that more than justifies Progress’ lowball ~11x P/E ratio).

Where most software companies offer growth, Progress Software offers stability. This is a company with rich ~40% operating margins, a very high ~80% recurring revenue mix, and a plan to recycle its cash flows into buying companies that both boost Progress’ ARR and expand its bottom line. To me, this stock is worth a nibble at current low prices.

For a live pulse of how tech stock valuations are moving, as well as exclusive in-depth ideas and direct access to Gary Alexander, consider subscribing to the Daily Tech Download. For as low as $17/month, you’ll get valuation comps updated daily and access to top focus list calls. This newly launched service is offering 30% off for the first 100 subscribers.

Disclosure: I am/we are long PRGS. I wrote this article myself, and it expresses my own opinions. I am not receiving compensation for it (other than from Seeking Alpha). I have no business relationship with any company whose stock is mentioned in this article.