The Vancouver-based Pretium Resources (NYSE:PVG) is a gold and silver miner operating one single controversial operation in Canada called the Brucejack mine.

Initially, the mine was developed by the salesman Robert Quartermain on October 28, 2010, for a price of $450 million. The mine started commercial production in 3Q’17 (please look at the chart below, which is showing production in gold and silver right from the start).

Pretium Resources released its fourth quarter of 2019, and bad news piled up, which scared off investors, and the stock tumbled the day of the results. It is now a recurring event that characterizes the mine.

First, some hype related to what mine could produce is building up. Then, the unavoidable reality of managing a problematic ore body appears in full-light and can’t be matched with expectations. The real sad story is that the mine is an exceptional one, which is delivering solid production of gold and silver, amazing free cash flow, and good prospects, as we can see below.

The results are that shareholders have lost the entire profit build-up in one year despite a massive increase in the gold price. The stock which was outperforming the VanEck Gold Miners is now lagging far behind.

I have been warning my followers about a situation like this and recommended a prudent approach when it comes to investing in Pretium Resources. It is not the first time that shareholders experienced such a roller coaster effect, and I bet it will not be the last.

Thus, the investment thesis is quite elementary here. Investors must trade PVG short term using technical analysis and bet only a small portion for the long term until the planned production will be sufficiently verified to offer a stable outlook which investors can safely trust. Moreover, investors will have to trade the stock in correlation with the gold price, which adds more short-term volatility and could accentuate the recent cratering effect.

Note: Again, in this article, I will not comment on the Snowfield prospect that the company owns.

Pretium Resources released its fourth-quarter results on February 12, 2020. It was the tenth full quarter of commercial production.

“In 2019, we beat the upper end of our revised gold production guidance and the lower end of our AISC guidance of 350,000 ounces and $900 per ounce of gold sold,” “In addition, we substantially exceeded our debt reduction target. Brucejack continues to be consistently profitable and a strong cash generator.”

AISC is calculated based on the gold sold. For the fourth quarter, Pretium Resources sold less of what it produced. Generally, gold sold and gold generated are quite similar, and it makes no difference, in general.

The company indicated an AISC of $866 per ounce on a by-product basis ($784 per ounce in 4Q’18), which means that the production of silver is deducted from the cost.

It seems that the company is struggling to figure out a good processing plan, and the market is not reacting well. Maybe it is time to be honest and tell it as it is.

Note: Generic free cash flow is the cash from operating activities minus CapEx.

The free cash flow situation is improving with the gold production. Yearly free cash flow (“TTM”) is now $180.9 million, with an FCF of $49.2 million in 4Q’19 (estimated by Fun Trading). As we can see, the company generates excellent free cash flow despite these earnings setbacks.

The details of the debt reduction are indicated below: 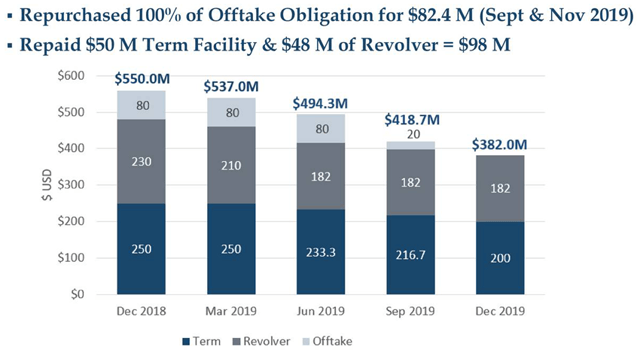 Brucejack Mine Preliminary Production Outlook: Ongoing gold production in the Valley of the Kings expected to be in line with the guidance range for 2020. 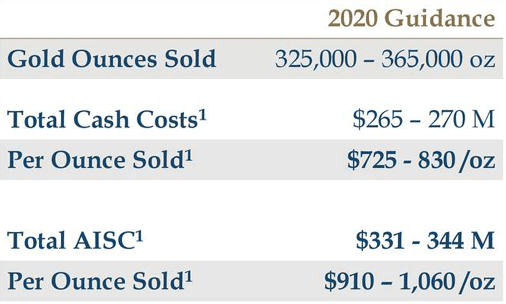 Gold and Silver Production at the mine.

Grade per tonne this quarter is 8.3 G/T, while daily production increased to a record of 4,225 TPD. I think the real issue is evident, looking at the chart above. The company is processing much more ore at lower grades to produce what was expected. The results are more costs and more risks reducing profit significantly. If we look at the chart above, the grade averaged ~12.0 G/T in 2018. The mill feed grade averaged 8.7 G/T in 2019.

However, in the fourth-quarter earnings, the company indicated 2020 gold production at Brucejack at 325k to 365k ounces at grades 7.6 g/t to 8.5 g/t, and it said it now expects annual production beyond 2020 to settle in a similar range.

Consequently, Pretium also announced management changes, with President and CEO Joseph Ovsenek set to step down after the company finds a replacement. The company also stated the resignation of M. Warwick, the company’s vice president and chief geologist.

Joseph Ovsenek told analysts that the company expects to issue a new mine plan before the end of the first quarter and will host a technical session to discuss it.

Pretium Resources released its fourth quarter of 2019, and the market sold off again. It came at a no surprise to my followers and me because I have explained the same problem many times on Seeking Alpha and warned consistently about what was occurring.

It is not the time to complain but the time to decide. If the mine is not what some would have hoped but still a decent and profitable mine, then I see an excellent opportunity right now.

PVG experienced a support breakout of its symmetrical wedge pattern on Friday. The question is to guess the next support after such a correction. Of course, it is not an easy task.

My opinion is that this old pattern has been replaced by a new Descending channel pattern indicated in the graph above. However, the new resistance is the early support at $9.50, which is now the new sell target.

Depending on the price of gold and what will be announced soon by the company, the stock could either cross the new resistance and retest $10.80 or go back down and retest the new pattern support at $6.90. I think the Brucejack mine is a great profitable mine, and despite some uncertainties about how good it is, it is quite exceptional nonetheless.

Hence, anything below $7.25 should be considered as an opportunity to accumulate.

Author’s note: If you find value in this article and would like to encourage such continued efforts, please click the “Like” button below as a vote of support. Thanks!

Join my “Gold and Oil Corner” today, and discuss ideas and strategies freely in my private chat room. Click here to subscribe now.

You will have access to 57+ stocks at your fingertips with my exclusive Fun Trading’s stock tracker. Do not be alone and enjoy an honest exchange with a veteran trader with more than thirty years of experience.

“It’s not only moving that creates new starting points. Sometimes all it takes is a subtle shift in perspective,” Kristin Armstrong.

Fun Trading has been writing since 2014, and you will have total access to his 1,865 articles and counting.

Disclosure: I/we have no positions in any stocks mentioned, but may initiate a long position in PVG over the next 72 hours. I wrote this article myself, and it expresses my own opinions. I am not receiving compensation for it (other than from Seeking Alpha). I have no business relationship with any company whose stock is mentioned in this article.

Madmaxer/iStock via Getty Images Investment Thesis “Green” energy is a prevalent theme among everyday investors fueled by a ‘common-sense’ thought process. ‘Save the world from climate change. Solve the energy crisis. Do it or you’ll […]