IHS Markit’s PMI surveys indicated a sustained expansion of the global economy in September, though trends varied by sector. Output rose in 18 of the 25 manufacturing and service sub-sectors covered by the PMIs during September, led by auto makers. Of the seven deteriorating sectors, tourism and recreation firms remained in the deepest downturn amid ongoing coronavirus disease 2019 (COVID-19) containment precautions.

Particularly encouraging was a further improvement in demand for machinery and equipment and construction materials, hinting at rising investment spending.

Auto makers led the upturn as increasing numbers of factories opened up further production capacity and car sales revived as showrooms reopened after lockdowns. New orders for autos and parts showed the largest monthly gain since December 2009, while production surged at a rate not seen since December 2010.

Banking services recorded the second-strongest rate of growth of all sectors, reflecting in part the reviving need for financial intermediation as economies sprang back into life in the third quarter. Business activity in the banking sector rose at the fastest rate since last November.

Healthcare services were consequently pushed into third place, though continued to perform strongly amid the ongoing fight against COVID-19, albeit with growth easing from August’s decade-high.

Household & personal use products also fared well, reflecting rising consumer demand for goods such as clothing, in turn often linked to the reopening of high streets around the world. Although output and new orders for household goods rose at slightly weaker rates than August, the past two months have seen the steepest rise in demand for such goods for three years.

By no means all sectors have benefitted from the lifting of COVID-19 restrictions, however, with tourism & recreation services, in particular, still languishing at the foot of the global rankings, hit once again in September by ongoing social distancing measures.

More encouragingly, media ؘ– which has been the second-hardest hit sector after tourism & recreation in the year-to-date ؘ- saw output rise for a third successive month in September as production resumed at increasing numbers of companies. 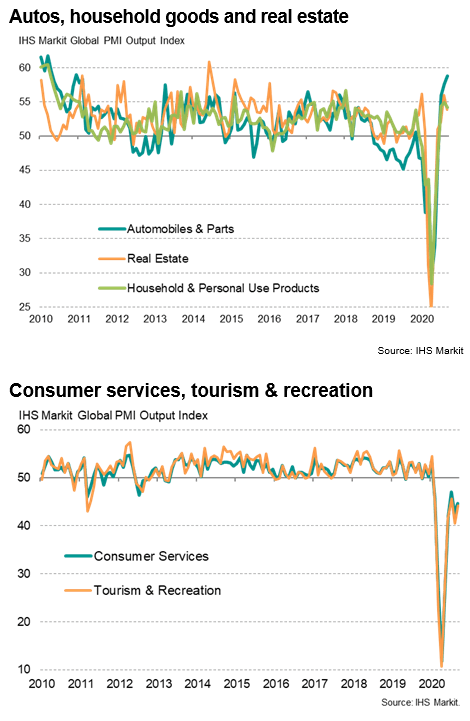 Two other sectors that we monitor closely are machinery & equipment and construction materials production, as these are useful bellwethers of capital expenditures, with the former a particularly good indicator of business investment. Encouragingly, August had seen output of machinery and equipment rise for the first time since November 2018, with the rate of increase gaining momentum in September to reach the highest for almost two years. New orders for machinery and equipment jumped to an extent not seen since May 2018.

Global construction material production, meanwhile, rose for a fourth month, the rate of increase remaining among the highest seen over the past two years. 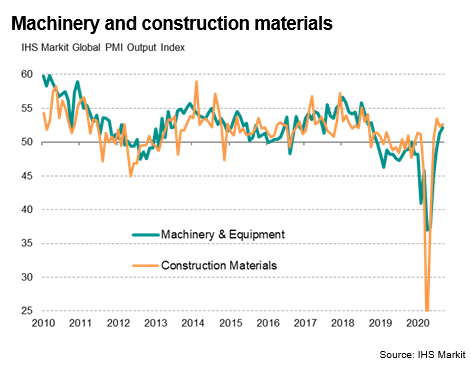 Combining the PMI new orders data from the machinery & equipment and construction materials sectors acts as a useful leading indicator of global business investment spending. The PMI data point to a third quarter rise in investment spending after a steep fall in the second quarter, with spending rebounding by around 0.5%, representing a modest recovery of some of the investment decline seen during the pandemic; a small but welcome positive step.