In response to the coronavirus-driven economic shutdown and the resulting decline in the stock market, the U.S. government and Federal Reserve have undertaken an unprecedented amount of intervention. The U.S. government passed a $2+ trillion package meant to help and businesses and individuals that have been affected by the shutdown. The shutdown also looks certain to negatively impact tax revenues this year and when combined with the high level of spending that the government already had, it appears that the United States is on track to deliver its highest deficit of all time. The Federal Reserve will likely monetize a significant portion of this deficit, resulting in a flood of new money entering the economy. This is the sort of environment that tends to be conducive to precious metals like gold. As I have discussed in various past articles, the best way to invest in gold is by purchasing the actual metal but by far the most convenient method is by purchasing shares of a gold fund. The best gold fund available is likely the Sprott Physical Gold Trust (PHYS), a closed-end fund that has numerous advantages over any of the gold ETFs.

Why Invest In Gold?

There are many precious metals investors that consider gold to be one of the only true currencies, possibly alongside silver and other precious metals. The reason for this is that gold and the other metals cannot simply be printed out of thin air like fiat currencies can. Instead, it requires a great deal of human and mechanical effort to extract for the deposits in the ground where it is found. As such, precious metals represent real work whereas growing the fiat money supply only requires a few key presses at the Federal Reserve (or other central bank).

One thing that investors always need to plan for is inflation. Inflation is usually described as a general rise in prices so it would result in the actual amount of goods and services that your money will buy going down over time. The impact of this over a multi-year retirement can be quite significant due to the effects of compounding. In actuality though, inflation results from an ever-growing amount of money chasing the same quantity of goods and services. In short, when the money supply increases faster than the actual productive capacity of the economy then inflation results.

As some readers will know, the United States dollar was backed by gold until 1971 when President Richard Nixon ended the convertibility of the American dollar into gold. This was partly due to the increasing competitiveness of the European and Japanese economies, which led to a growing trade deficit in the United States and a run on American gold stocks as foreigners began to convert their dollars into gold. The Federal Reserve had a very limited ability to defend the value of the dollar and the gold reserves due to the fixed exchange rate between the dollar and gold. In addition, there is a possibility that the United States wanted to print money to help pay for the expenses of the Vietnam War. The Federal Reserve has taken advantage of this new opportunity and has been steadily increasing the money supply since the 1970s. We can see this here:

The Federal Reserve began ramping up its creation of new money since the financial crisis a decade ago through multiple rounds of quantitative easing. On August 7, 2007, the Federal Reserve had approximately $870 billion worth of assets on its balance sheet. This figure had climbed to $2.23 trillion at the end of 2009. As of March 2020, that figure stood at $4.72 trillion. 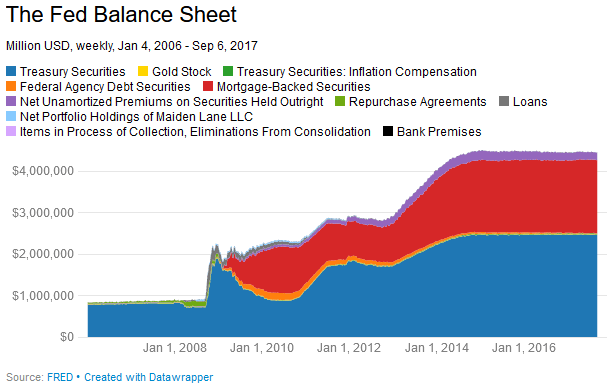 The Federal Reserve’s latest efforts have grown the balance sheet even more. In the past month alone, the central bank has purchased more than $2 trillion of agency and mortgage-backed securities. This is more than in any previous round of quantitative easing, including during the bank’s efforts to combat the last recession.

The banks intends to continue that and currently expects to purchase $225 billion worth of securities through public open market operations this week. 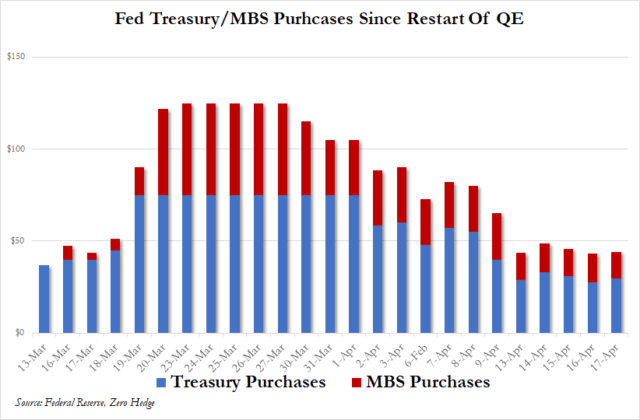 Naturally, the Federal Reserve will be printing new money to make these purchases, just as it did in the various rounds of quantitative easing following the last recession. This will result in a large amount of new money entering the economy. This flood of new money has been one of the biggest reasons why the stock market has generally been rising over this month. The Federal Reserve’s balance sheet expansion, along with similar actions around the world, is one of the reasons for the strong market that we saw over most of the last decade. In this case, much of the newly printed money did not enter the real economy but instead it remained in the capital markets. This is one of the reasons that we have not seen the flood of new money result in significant inflation in prices of the things that we buy every day.

In this case though, the new money may end up actually entering the real economy. As of April 17, 2020, the Federal Reserve had a total of $6.4 trillion in assets on its balance sheet. 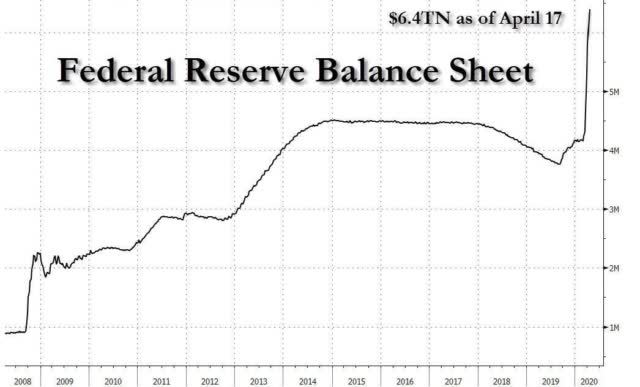 Mark Cabana, one of Bank of America’s strategists with regards to the Federal Reserve, expects that this figure will surpass $9 trillion by the end of the year. If he is correct, this would mean that the Federal Reserve will be monetizing all of the debt issued by the Federal government this year, including the newly approved multi-trillion dollar stimulus package in response to the coronavirus pandemic. There are several provisions of this bill that will result in money actually entering the real economy including direct payments to individuals, loans to businesses that end up being forgiven if the money is used to keep people employed, direct bailouts to struggling businesses, and other things. Meanwhile, it seems certain that the broader economy will shrink this year due to the widespread shutdowns meant to stop the spread of the virus and all of the people that are out of work that are going to be unable to spend money even if it were possible.

This is the sort of environment that is highly conducive to inflation. As already mentioned, inflation is caused by the amount of money circulating in the economy increasing more rapidly than the economy’s ability to provide goods and services. This results in more money chasing each economic production unit available and essentially results in prices being bid up. This is beneficial for gold because gold itself benefits from a greater amount of dollars chasing each unit of gold.

We can in fact see evidence that this story is playing out. As we can see here, the price of gold has been generally increasingly over the course of this year, although it has been rather volatile: 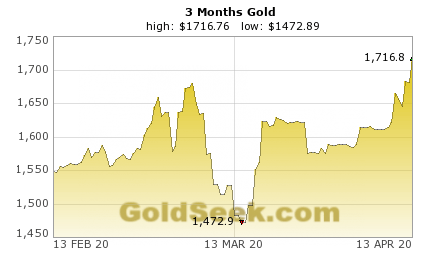 Curiously though, there appears to be some strange occurrences in the gold market. One thing that I have noted in some past articles is that the reported price of gold is largely dictated by the gold futures market and not the physical market. The gold futures market essentially allows for the creation of gold out of thin air because a trader can write a new contract, post a relatively small percentage of its total value as margin, and then trade it. In most cases, the purchasing party does not actually request delivery in gold but instead takes delivery in the form of cash settlement. As a result of both the cash settlement and the leverage afforded through margin, participants in this market are able to trade much more gold than actually exists. This fact has led some to speculate that these characteristics may allow certain large banks to control or manipulate the market by issuing a large number of short contracts all at once with very little cash.

There is some evidence to support this. Over the past month, the Chicago Mercantile Exchange has raised the maintenance margin on gold futures to $5,500/$5,000 from $4,950/$4,500. This was strangely not reported by the mainstream media despite the fact that it is a very substantial 11.11% increase. In 2011, the exchange raised the margin on silver futures by a whopping 68% in order to cool down a raging silver bull market that carried silver prices to $50 per ounce. The price of silver promptly cashed and has never again reached that level. It would be reasonable to assume that the reason why the exchange has chosen this moment to raise the gold futures margin requirement is to actively attempt to cool down gold prices, particularly since it has attempted to raise the margin clandestinely.

Earlier in the article, I stated that the Sprott Physical Gold Trust is perhaps the best way to buy gold other than actually holding the physical metal. This is because of its structure. This fund holds its gold in a fully allocated account at the Royal Canadian Mint. A fully allocated account is an account in which the fund actually holds title to specific, serialized gold bars in the custodian’s vaults. This is reinforced by the fact that investors in the fund can actually redeem their shares of the fund for physical gold bars from the vault.

This differs greatly from the more popular exchange-traded funds like the SPDR Gold Trust (GLD). These funds store their gold in unallocated accounts. In an unallocated account, the fund does not actually hold title to any specific bar in the custodian’s account. In fact, what it actually has is essentially a promise from the bank to pay the fund a specific amount of gold. The bank may or may not actually have the gold backing up these promises. Thus, there is a significant amount of counterparty risk here that PHYS does not have. Therefore, PHYS is a much safer way to play the gold market than any exchange-traded fund.

In conclusion, the Federal Reserve is poised to flood the economy with an unprecedented amount of newly printed money over the next year. This could prove to be very good for gold prices as more money chases a same or even decreasing supply of goods and services. The Sprott Physical Gold Trust is by far a much better way to play this than any of the gold exchange-traded funds due to its structure. As this fund actually holds the title to the gold that it holds, it is able to eliminate its counterparty risk. Overall, this fund could be good to hold right now as a way to protect your wealth in the face of this money printing.

Disclosure: I/we have no positions in any stocks mentioned, but may initiate a long position in PHYS over the next 72 hours. I wrote this article myself, and it expresses my own opinions. I am not receiving compensation for it (other than from Seeking Alpha). I have no business relationship with any company whose stock is mentioned in this article.

Additional disclosure: I will likely take a position in gold in the near future. It will either be through PHYS or I will purchase physical gold from a bullion dealer.