Tobacco giant Philip Morris International (PM) has been frustrating at times for investors. The stock’s current trading range in the mid-$80s is parallel with as far back as early 2012. However, much has changed for Philip Morris over that time. With much of the initial investment into IQOS now behind it, the company is now poised to return to growth, even in the face of continued FX headwinds. Combining this with the stock’s lofty dividend and current valuation, we see 10-12% annual total returns as a very reasonable expectation moving forward. In what is becoming an increasingly heated stock market, this makes Philip Morris a great buy for long-term investors.

Investors who have held Philip Morris for a long time frame may feel a bit left out by the large gains made by the broad market following the recession a decade ago. While peaks and valleys have been explored over the years, the stock currently trades in the mid-$80s, flat with levels as far back as early 2012. However, there are legitimate reasons to be excited for the future. The business and circumstances surrounding it have changed drastically from eight years ago.

Growth In The Face Of A Strong Dollar

Any investor who is familiar with Philip Morris knows that the company sells Marlboro and other cigarette brands exclusively outside of the United States market. Because this is the core business for Philip Morris, the company exposes itself to FX rates, because those foreign revenues need to eventually be converted into the US dollar that Philip Morris records/reports its financial records in.

In our previous update on the company, we operated under the assumption that a currently strong US dollar would likely weaken over the coming years. This is important because it would reveal (perhaps even magnify) Philip Morris’ true revenue generation. But what if the US dollar remains strong? 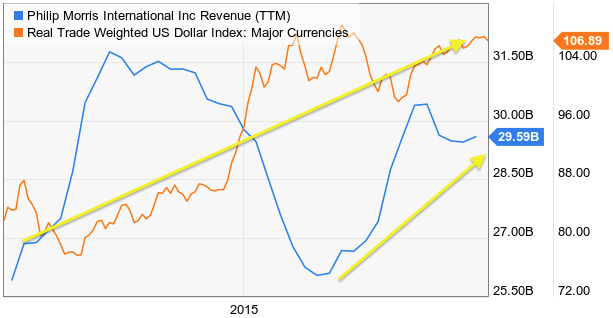 In the chart above, we have graphed the company’s reported revenues against a broad index of the US dollar. While more than FX rates influence the company’s revenues, we can see a clear inverse relationship between the two variables. Surely, a weak US dollar would lead to an uptick in revenue growth for Philip Morris. But as IQOS has gained momentum in recent years, we see revenues growing to earlier levels, despite continued strength of the USD. Stated another way, growth of the actual business is reaching the point that revenues will reach new heights with or without the influence of existing exchange rates.

Another critical difference from 2012 to today is the presence of IQOS. It’s been an interesting journey to see the difference in how Philip Morris and sister company Altria (MO) have handled the inevitable decline of combustible cigarettes. Altria has opted to diversify its business via strategic investments into beer, cannabis, and electronic cigarettes, while volumes decline at an increasingly worrying rate.

The problem for Altria has been that these investments have hit some early bumps in the road. While Cronos Group (OTC:CRON) has seen its value plummet since Altria’s investment, Juul has also taken some lumps, as regulators have jumped all over it in response to the company’s early popularity with young users. Altria has already had to write down a portion of its investment into Juul.

When looking at Philip Morris, the company has had to deal with a similar issue. Its volumes in traditional cigarettes are also dropping – though not quite as quickly.

Rather than venture into new businesses, Philip Morris developed IQOS as a means to alter its approach towards nicotine products without leaving its core competencies. Since entering its first market in 2014, the continued development of IQOS has been a success. For a full rundown on IQOS, investors can see our spotlight feature, but we will highlight some information for our purposes in this article.

IQOS is effectively diversifying the company away from a concentration in combustible products. It’s also stabilizing volume losses and beginning to create opportunities for revenue growth. Through three quarters in 2019, volumes of “HTUs”, or Heated Tobacco Units, are up 45.7%. This has shrunken the company-wide volume loss from 5.9% (for cigarettes) to a combined loss of just 2.1%.

The company is projecting total HTU volume at 59 billion units, or “sticks”, for the full 2019 year, with long-term growth expected to continue at a rapid rate. The company is now in 51 global markets, including the US on a licensed basis through Altria.

As the IQOS product continues to mature, the company will begin to improve its FCF streams. The rollout of IQOS has come at a cost to Philip Morris. The company has spent on CAPEX to build out its production of IQOS, and the IQOS device itself has impacted margins (the margins of the HTU sticks are much higher than those of the device that heats the stick). 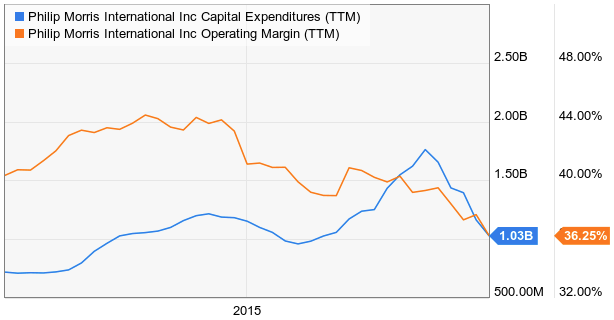 This means that as the IQOS user base expands and HTU volumes grow, those high-margin dollars will continue to mix in and raise overall profitability for the company. An underrated aspect of this process is that Philip Morris may have organically set itself up for the future – as opposed to expensive investments into growing companies at a cost to the balance sheet.

The Dividend Is The Steady Constant Of Philip Morris

The most well-known aspect of investing in any tobacco company is the large dividend that gets paid out to investors. Despite the stagnant stock price and investments into IQOS, Philip Morris has continued to raise that dividend each year. 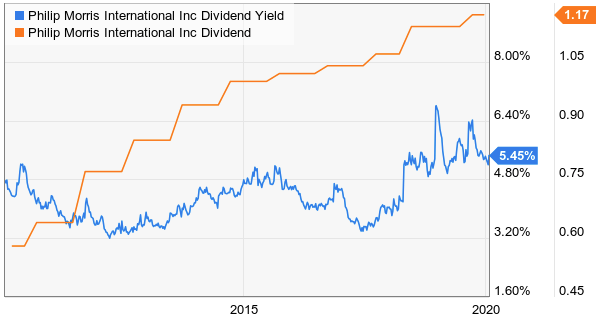 A silver lining of its stock price stagnation is that the continued growth of the dividend has pushed yield to its highest levels since spinning off from Altria. While the yield has come down from its highs of more than 6.40%, the current yield of 5.45% is still well into the high end of its historical range. 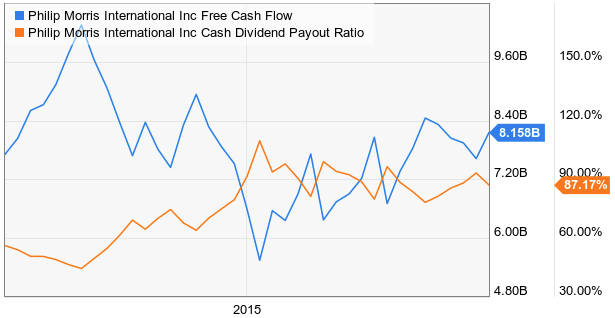 Philip Morris did put itself in a tight spot five years ago when FCF levels were no longer adequate to cover the payout of the dividend. The steady rebound of FCF has seen this payout ratio gradually come down over time. We would like to see this come down to about 80%, so investors should probably expect a couple more years of minimal dividend increases. But with clear operational momentum with IQOS, we see FCF levels continuing to rise in the years ahead.

While the stock is now well off of 52-week lows of $69 per share, there is a case to be made that shares are still attractive today for long-term investors. The stock’s current full-year earnings are guided at approximately $5.16 per share. This still factors in currency headwinds, but strips out non-recurring charges. The resulting earnings multiple of 16.41X is still a slight discount to the stock’s 10-year median P/E ratio of 17.19X.

Most of the previous 10 years include long stretches of FX headwinds and don’t factor in the recently established (past few years) of IQOS momentum. The argument could be made that multiple expansion could take place. But for the sake of a margin of safety, we will assume that the stock’s multiple remains constant at current averages over the long term.

Thanks to the addictive nature of tobacco, Philip Morris has been able to cancel out the nearly $1 billion FX revenue headwind with price increases. Given the positive volume momentum from IQOS growth, revenues have grown at around 4% per annum over the past three years.

With the alleviation of one-time charges and potential for FX relief in the coming years, growth of between 4% and 6% should be quite obtainable. Analyst consensus puts expected earnings growth at 6% over the next five years. When you factor in the stock’s current dividend yield, this results in total returns potential of approximately 10-12% over this time frame. We feel that this is a figure that can be hit, despite assuming a lot of negatives. Overperformance or a weakening of the US dollar would easily push total returns above this projection. This also doesn’t factor in the eventual return of stock buybacks – a practice that stopped when FCF streams dipped, and has yet to come back online.

In summary, Philip Morris has come a long way over the past eight years – despite share price stagnation over that time frame. With IQOS momentum sparking revenue growth in the face of continued FX headwinds, the company appears poised to begin a new era of growth. With a dividend that is yielding almost as much as it ever has, double-digit total returns are a very realistic expectation. In a bull market that currently celebrates high growth, Philip Morris now lies a bit under the radar. Don’t make the mistake of dismissing the company. This storied dividend growth name could be on the verge of returning to prominence.

If you enjoyed this article and wish to receive updates on our latest research, click “Follow” next to my name at the top of this article.

Disclosure: I am/we are long PM. I wrote this article myself, and it expresses my own opinions. I am not receiving compensation for it (other than from Seeking Alpha). I have no business relationship with any company whose stock is mentioned in this article.