Philip Morris International is a multinational tobacco company that sells products in over 180 countries. The company was spun off from its parent company Altria in 2008 to allow Philip Morris International to pursue more sales growth in emerging markets and to have more freedom operating outside of United States including from potential litigations and legislative restrictions. Over the last decade following the split, Philip Morris International has seen slow to no growth in key financial metrics, with revenue and gross profit increasing annually on average by about 1% on a compounded basis and net income slightly decreasing during this time period. However, the company’s long-term debt has steadily increased by nearly 8% on a compounded basis over the last decade. On first glance, it appears that they have struggled to achieve significant growth in the last decade following their split from Altria. 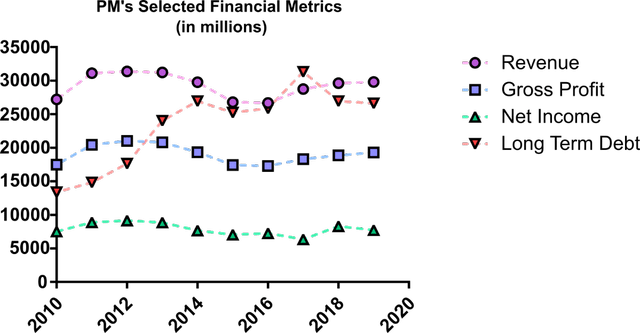 In order to understand if Philip Morris International’s dividend is sustainable and some of the company’s plans to promote growth, let’s take a look at their key business segments. As of the end of 2019, their main business areas included:

According to Philip Morris International’s Q3 earnings call, the company is expected to have at least 8% adjusted diluted EPS growth through 2021 and analysts predict that revenue will grow by about 6% through 2022. A significant part of this growth will be fueled from the sales of the company’s RRPs. Below, we can see that their RRP net revenue (after excise tax) has seen strong sales growth, with net revenue increasing by over $6 billion for RRP sales over the last five years.

Sales of combustible products still make up the majority of Philip Morris International’s total revenue, though cigarette sales have been steadily declining. Smoking is currently the leading cause of preventable death globally, which has resulted in governments and agencies, including the world health organization, taking a number of steps to reduce cigarette use. According to the world health organization, about 2% of smokers are expected to quit over the next five years, which is also in line with long-term smoking rate studies. Philip Morris International’s cigarette sales have indeed decreased over the last five years, with volumes decreasing by nearly 4% annually on a compounded basis. This is similar to Altria’s declining cigarette volumes, with the company having 4.3% declines annually on a compounding basis over the last five years. However, despite the declining cigarette volumes, both companies have maintained steady shares of their respective markets from 2010 to 2019. Taken together, this highlights how combustible sales are stable, though the secular decline of cigarettes has encouraged Philip Morris International to expand their sales to include more sustainable tobacco products. 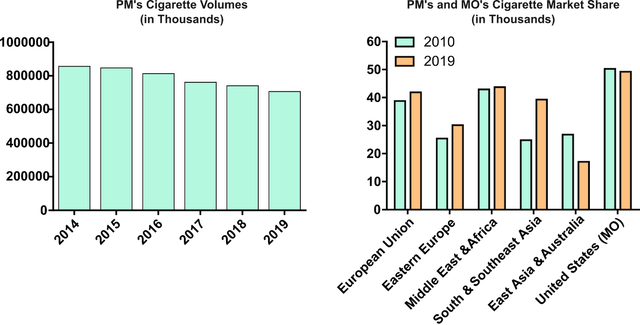 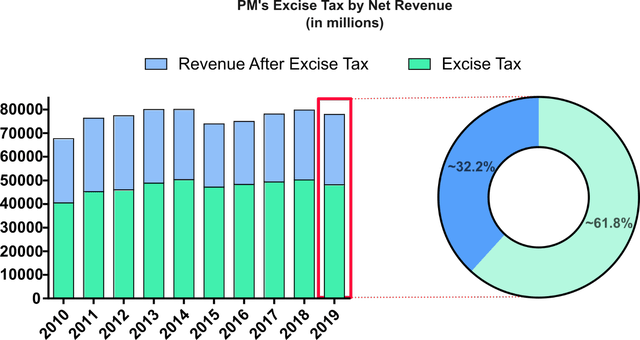 Interestingly, Altria also faces excise taxes, though the degree of these taxes has been much more moderate. The highest excise tax Altria reported was a little over 30% of their total revenue in 2010, and has steadily declined over the last decade. Part of this recent decline has also been driven by sales of Altria’s noncombustible products, which have significantly less excise tax than their traditional cigarettes. This highlights just how important it is for tobacco companies, especially Philip Morris International, to transition away from traditional cigarettes to more sustainable and tax efficient products. 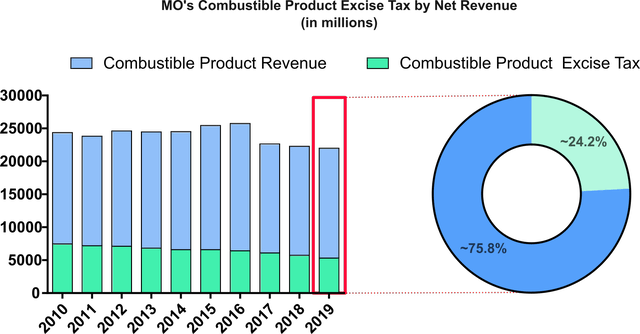 Philip Morris International’s primary strategy to transition into reduced risk products involves reducing the exposure of toxic substances inhaled through traditional combustible cigarettes. This strategy revolves around the sales of four different platforms as shown below:

Currently, Philip Morris International’s platform 1 and IQOS products make up the majority of their RRP product sales, with IQOS being one of the leading RRPs in the industry. Currently, there are over 15 million IQOS users with the global health crisis actually increasing the transition of smokers to IQOS products. These next generation tobacco products have seen significant growth over the last few years, are scientifically supported to reduce exposure to harmful chemicals compared to traditional cigarettes, offer potential growth opportunities and could provide more sustainable sources of revenue for the company.

This is in contrast to Altria, which has taken a strategy of providing reduced risk tobacco products and other non-tobacco sin stocks. I discussed this more in a previous article, but essentially Altria has been focusing on potentially reduced risk tobacco products including oral tobacco (Altria’s leading product Copenhagen is currently in review by the FDA as a modified risk tobacco product), electronic cigarettes especially via their JUUL acquisition, alcoholic beverages and cannabis. Although Altria’s strategy is diversified outside of tobacco, their acquisitions have significantly increased the company’s debt and have resulted in non-cash impairment charges.

The main challenge to Philip Morris International is the secular declines of their core combustible sales. As discussed above, organizations and governments have taken steps to reduce tobacco consumption. Philip Morris International predicts that, at the current rate of cigarette decline, the number of smokers over the next decade will remain largely unchanged. This has helped result in aggressive initiatives by governments and agencies to reduce tobacco use including via increasing excise tax, smoke-free laws, pictorial health warnings, anti-smoking adds (sponsored by tobacco companies) and reducing the amount of nicotine in cigarettes. I believe the ability of Philip Morris International to provide less harmful and more sustainable products will be essential to help address the health problems associated with smoking and the long-term success of the company.

It is also important to note that Philip Morris International faces challenges from illicit tobacco trade, which can be exacerbated in particular regions by higher than average excise taxes.

It is important to note that while both companies face challenges with future government regulations, Philip Morris International faces significantly higher excise taxes that accounts for about 60% of the company’s total revenue. Furthermore, Philip Morris International also faces challenges from illicit tobacco products which can be exacerbated by higher excise taxes. Finally, future changes enacted by the FDA, including limiting the amount of nicotine in tobacco products, could also influence the regulatory approach of other governments.

Below I summarize what aspects of the company I’m personally optimistic and pessimistic about. I believe that Philip Morris International is a better choice in regards to the safety of the business, while Altria offers a better valuation. I personally lean towards Altria due to their appealing valuation, though I believe that both companies offer a potentially rewarding dividend investment and I am seriously considering purchasing Philip Morris International going forward. 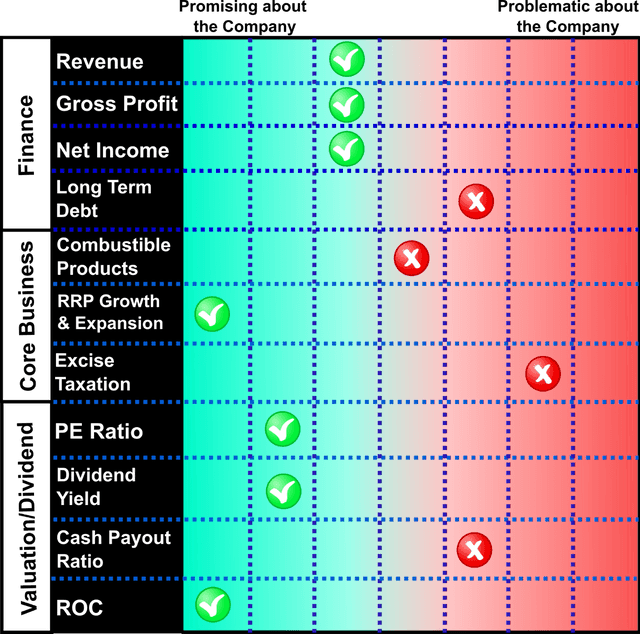 If you enjoyed this article, I would really appreciate your following me (right below the title) and/or pressing “Like this article” just below.

Disclosure: I am/we are long MO. I wrote this article myself, and it expresses my own opinions. I am not receiving compensation for it (other than from Seeking Alpha). I have no business relationship with any company whose stock is mentioned in this article.