Owning and/or adding dividend growers is still the best income-producing strategy for your equity portfolio. One, however, cannot just buy a dividend growth ETF indiscriminately.

PFM is one such fund that targets long-term dividend growth stocks, but its methodology doesn’t necessarily make it the best choice in the space.

If you’re looking to add some dividend income to your portfolio right now or are just looking to take a little risk off the table, dividend growth is still your best option. Especially in the current market. It’s the one major dividend strategy that has managed to keep a relatively close pace with the S&P 500 over the past year.

Even though it’s given up some of its outperformance in the past couple of months, it’s still outperforming the dividend quality and high yield strategies by more than 300 basis points and remains the best approach for managing downside risk.

One must be selective, however, within the dividend growth universe. If you’re considering targeting long-term dividend growers, companies who have paid and raised their dividends for at least 10 years in many cases, there are several ETFs from which to choose, but each typically has their own take on portfolio construction. Factors, such as security weighting methodology and whether to include REITs in the portfolio, can make the style of the fund and performance potential much different.

One such fund is the Invesco Dividend Achievers ETF (PFM). Its objective is fairly straightforward – it tracks the NASDAQ US Broad Dividend Achievers Index and targets companies that have raised their dividends for at least 10 consecutive years. Outside of placing a modest liquidity requirement on stocks in order to qualify, that’s about it. A modified market cap weighting system is used, which gives the portfolio a heavy large-cap lean.

Note: At this point, it’s worth taking a look at some dividend-related terminology. Dividend “achiever” is generally considered a fund with 10+ years of dividend growth, whereas dividend “aristocrat” is a term used for companies with 25+ years of growth. The two terms are often used interchangeably but there is a difference. PFM targets achievers, whereas a fund, such as the ProShares S&P 500 Dividend Aristocrats ETF (NOBL) goes after those with longer histories.

As you can imagine, companies with long dividend histories tend to be more mature and, by extension, slow growth value-oriented businesses. That means PFM has lagged the S&P 500 (SPY) since its inception nearly 15 years ago, but it’s performed on par with its chosen benchmark, the Russell 3000 Value Index (I also included the Russell 1000 Value Index, since PFM has such a large-cap tilt). 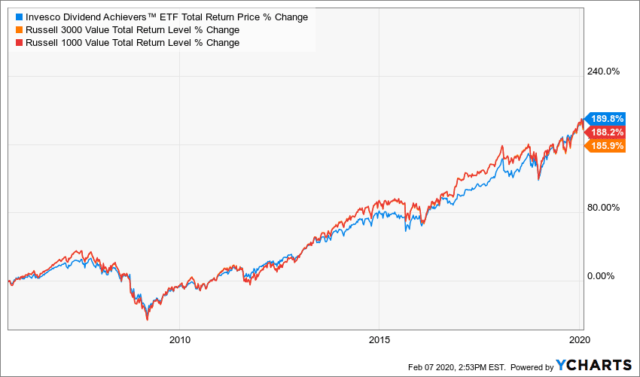 Companies with long histories of dividend increases tend to be more mature in nature and reinvest less in growth initiatives for their businesses. Because of that, dividend growth portfolios tend to exhibit less volatility overall than the broader market. 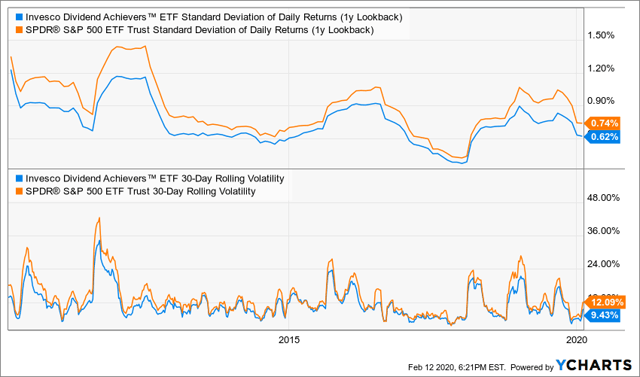 PFM, using multiple volatility measures, is about 15-20% less risky than the S&P 500, making it an ideal core holding for many portfolios.

The fund’s top 10 holdings include many of the biggest cash cows in the world. 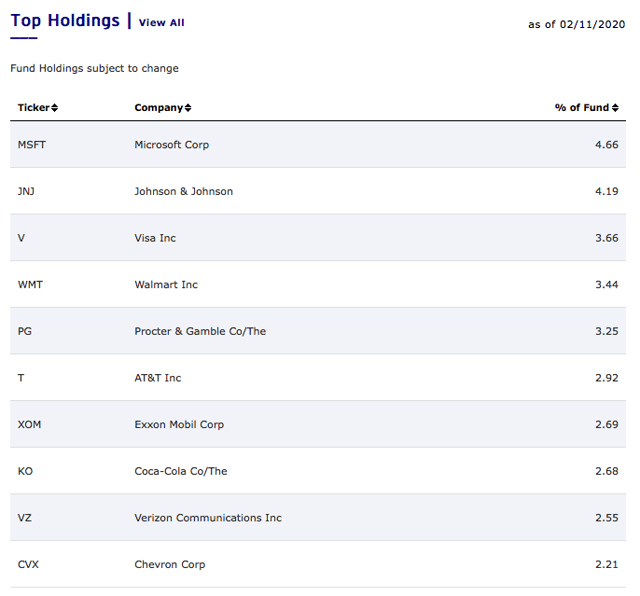 Comparison To Other Dividend Growth ETFs

Probably the best way to illustrate how PFM is constructed is to put it side-by-side with three of the biggest dividend growth ETFs in the industry – the Vanguard Dividend Appreciation ETF (VIG), the iShares Core Dividend Growth ETF (DGRO) and the ProShares S&P 500 Dividend Aristocrats ETF. All three require some degree of dividend growth history in order to qualify, but are actually built quite differently.

Source: image created by author with data from fund websites

NOBL is the only one of the four that uses the traditional “aristocrat” requirement for its portfolio, so its composition will look quite different from the others on that basis alone.

DGRO has a looser requirement of just 5 years of dividend growth, but also layers on sustainability measures. Potential components must have positive earnings, a payout ratio of under 75% to ensure they’re not overextending themselves and yields cannot be in the top 10% of the universe. This helps eliminate some of those yields that may be prone to a cut, but also essentially removes higher-yielding REITs from the portfolio.

PFM and VIG share a nearly identical methodology. The only difference? PFM allows REITs and VIG does not. Other than that, most of the portfolio names are the same.

The expense ratios could be a real deal-breaker. VIG and DGRO are well-known as some of the cheapest ETFs available. PFM, at nearly 0.5% higher, will likely struggle to keep up with these funds over time, especially VIG, which is essentially the same portfolio minus the REITs.

source: image created by author with data from fund websites

Dividend growers have never been high yielders and these funds are no exception.

DGRO pays the highest yield of the bunch handily topping the 1.7% yield of the S&P 500, but that comes at the expense of slightly higher risk. The difference between the PFM and VIG yields is likely the presence of REITs. PFM has been the least risky of the four, which could be a consideration if you’re interested in both risk mitigation and the presence of REITs in your portfolio.

source: image created by author with data from fund websites

Despite making a specific inclusion of REITs in the portfolio, its presence in PFM is very small. Consumer staples and industrials are popular in virtually all funds, while utilities are present, somewhat surprisingly, in relatively modest quantities. Tech is virtually non-existent in NOBL, which probably isn’t too surprising since this is a growth sector and is not known for its dividends. Overall, these funds are fairly diversified, although PFM has a bit more of a cyclical tilt. This could be a plus in a more pro-cyclical environment, but it hasn’t done PFM many favors lately.

It’s difficult to get behind a fund that’s at such a cost disadvantage, especially when there’s a near-identical alternative in VIG that’s much cheaper. The advantage of PFM, in theory, could be the presence of high-yielding REITs where its peers have none, but the small real estate allocation gives it only a minor yield advantage.

PFM requirement of at least 10 years of dividend growth is reasonable enough, but I’d prefer to see some sort of quality or sustainability component built into the methodology. There’s still the possibility of a dividend cut here and a screen for cash flows, payout ratios or something similar could help eliminate a few of the riskier names.

PFM has a great track record in the large-cap value category, but I’d still prefer VIG instead.

Disclosure: I am/we are long DGRO,VIG. I wrote this article myself, and it expresses my own opinions. I am not receiving compensation for it (other than from Seeking Alpha). I have no business relationship with any company whose stock is mentioned in this article.

JHVEPhoto/iStock Editorial via Getty Images Investment Thesis Pfizer (NYSE:PFE) is a global biopharmaceutical company, and they discover, develop, manufacture, and sell drugs and treatments. They have a strong portfolio of drugs and treatments in vaccines, […]