Pembina Pipeline Corporation (PBA) is one of the largest and most diversified midstream companies in Canada. As has been the case with the midstream sector in the United States, the midstream sector in Canada has seen its share prices utterly demolished in the face of the pandemic-driven decline in crude oil prices. As is the case with American midstream companies, companies like Pembina Pipeline have been largely insulated from this weakness. Thus, the massive decline that we have seen in Pembina Pipeline’s stock price this year could present us with an excellent opportunity.

As mentioned in the introduction, Pembina Pipeline is one of the largest midstream companies in North America. The firm primarily operates in Canada, although some of its operations do stretch down into the United States:

One of the things that we can see above is that Pembina’s pipeline operations are quite diversified. The company transports not only liquids and natural gas like most of its larger peers but is also active in transporting heavy crude and synthetic crude oils. This is something that we do not see particularly often with the American midstream companies. This is because American shale plays, which account for most of the crude oil production in the United States, produce a grade of light crude oil. Heavy oil and synthetic crude are produced primarily in Canada in areas like the Athabasca oil sands. Thus, a midstream company that operates primarily or exclusively in the United States would have no need to carry synthetic crude.

The overall diversity that we see among the company’s various types of pipelines is somewhat nice to see. This is because crude oil and natural gas have somewhat different fundamentals. We can see this quite clearly by looking at energy prices and production since the start of the COVID-19 pandemic. As I have noted numerous times in the past, crude oil prices fell by far more than natural gas prices did once the pandemic hit. This has caused producers in oil-focused basins like the Permian and the Bakken to cut back far more than producers in natural gas-focused basins like the Marcellus. Thus, midstream companies focused on transporting natural gas have generally held up better than midstream companies focused on transporting crude oil. As Pembina Pipeline is focused on transporting all different hydrocarbons, it can limit the portion of its business exposed to problems with any single product. With that said, in many cases oil and natural gas are produced together, so this protection is certainly not absolute but it is still better than nothing.

As is the case with many large midstream companies, Pembina Pipeline also has a facilities division. This business unit operates natural gas processing plants and natural gas liquids fractionation facilities, which are utilized to make the hydrocarbon products appropriate to be marketed to end users: 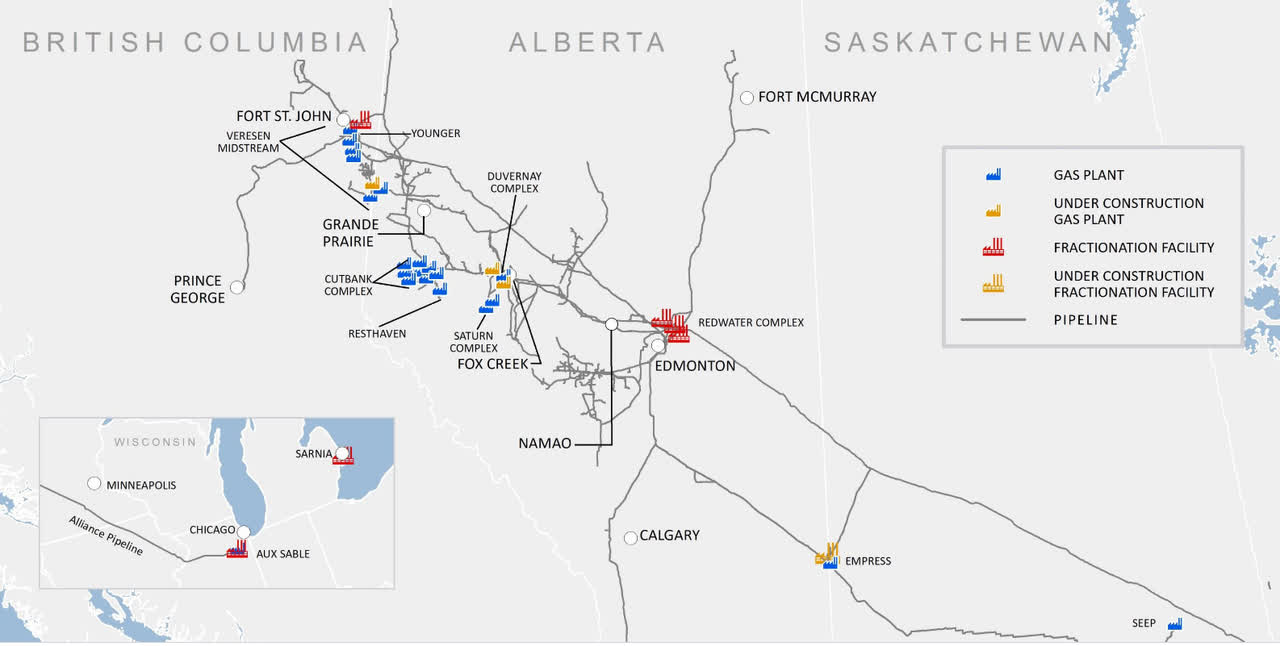 These facilities add a certain amount of variety to Pembina’s business that may make the company more attractive as a midstream partner than a smaller peer that may not have these facilities. This is because Pembina is able to gather the resources at the well and perform all of the work that is needed in order to prepare the resources for sale. Thus, the customer only has to deal with one supplier as opposed to multiple ones. The reduced complexity improves efficiency and may be appealing to some customers. The extra services benefit Pembina Pipeline as well because it is able to collect revenues from both its transportation and processing services, thus increasing its total revenues and cash flows.

As has been the case with most companies in the midstream space, Pembina Pipeline has seen its stock price devastated by the recent decline in energy prices. As we can see here, the company’s stock price is down 38.70% year to date: 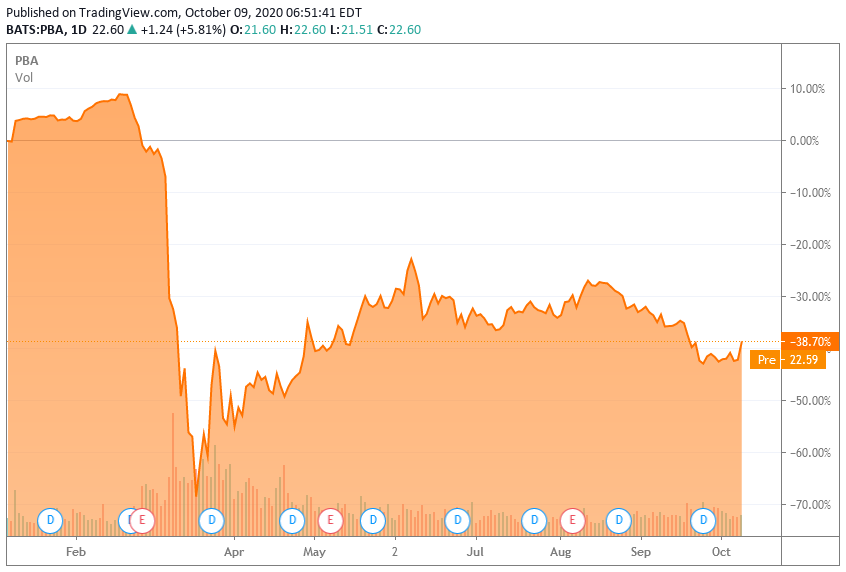 However, Pembina itself is not particularly impacted by fluctuations in energy prices. This is because of the business model that the company uses. In short, it operates very much like a toll road in that it charges a fee for each unit of resources moving through its infrastructure. These fees do not depend on the value of the products being shipped but rather on the quantity being shipped. There may be some that point out that many energy companies have reduced their production volumes due to the low energy price environment. While this is certainly true, Pembina Pipeline has a way to protect itself against the volume declines that the lower production would otherwise cause. In short, the company provides its services to its customers under long-term contracts that include a minimum volume commitment that specifies a certain minimum quantity of resources that the customer has to send through the system or pay for anyway. These contracts thus greatly insulate Pembina Pipeline against commodity price fluctuations. Perhaps even more importantly, Pembina Pipeline has consistently increased the proportion of its cash flow that comes from these contracts over the years. In 2020, approximately 90.95% of the company’s adjusted EBITDA comes from these fee-based contracts:

Thus, despite what the decline in the stock price might make someone think, Pembina Pipeline has not been particularly affected by the decline in commodity prices. In fact, the company is on track to grow its adjusted EBITDA to record levels this year, just as it was able to do in previous periods of weakness in oil prices:

This serves to show us the true strength of the company’s highly-contracted business model. However, it is important to note that these contracts do not mean very much if the counterparty is not able to remain solvent. We have already seen a few high-profile bankruptcies in the oil patch and as I pointed out in the past, it is possible that we will see more if crude oil remains suppressed. Admittedly, I am much more concerned about American energy companies than I am about Canadian ones that make up the majority of Pembina Pipeline’s customers but it could still be a good idea to examine Pembina Pipeline’s exposure to this potential risk. The easiest way to do that is to look at the balance sheets of the customers. Here is the basic summary: 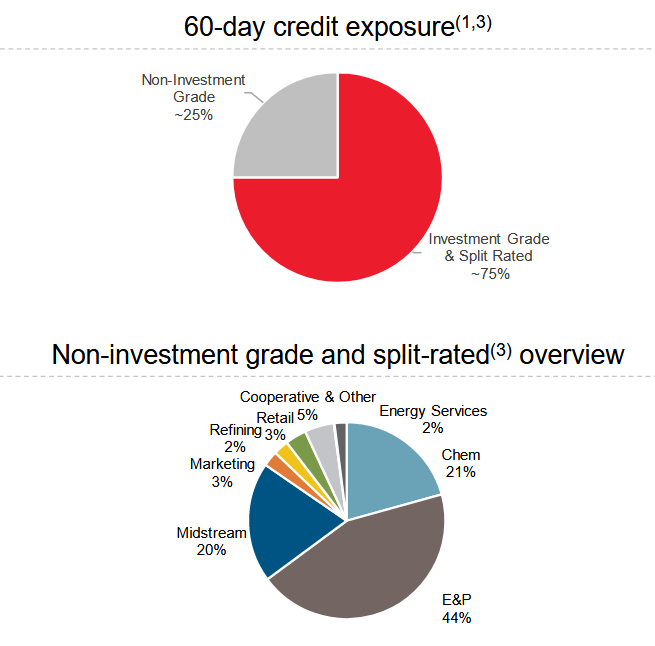 As we can see here, fully 75% of Pembina Pipeline’s adjusted EBITDA comes from companies with investment-grade credit ratings. This is nice to see as these companies are typically very well-capitalized entities with strong balance sheets that should be able to weather through any economic conditions. In addition to this, these companies should be doing everything in their power to ensure that they honor their contracts with Pembina Pipeline. This is because such companies have a reputation to protect as this reputation makes it much cheaper for them to obtain financing. This is a competitive advantage that few companies will be willing to give up easily.

One thing that we do notice is that fully 25% of the company’s cash flow comes from customers with below investment-grade ratings. This is higher than what other midstream companies like Williams Companies (WMB) have. This could admittedly be concerning since it is these companies that are much more likely to have problems making it through difficult economic environments such as the one that the world is currently mired in. This problem is compounded by the fact that 44% of this non-investment grade cash flow comes from exploration & production companies. These companies are directly exposed to the weakness in crude oil prices since their whole business is producing and selling crude oil and natural gas. When we combine the loss of revenues caused by the pricing weakness and the fact that these companies tend to have weak balance sheets to begin with, we can clearly see that these are the firms exposing Pembina Pipeline to the most counterparty risk. Fortunately, Pembina Pipeline has been taking steps to reduce its exposure to counterparties like this. The company states that its customers with non-investment grade credit may be required to either pay in advance, provide a cash deposit, or obtain a guarantor such as a larger corporate parent or a bank. These things greatly reduce the risk that the company will not be paid for its services, so we should not have to worry too much about this.

One thing that we have seen a great deal of in recent months is midstream companies reducing their spending on capital growth programs. This is in direct response to upstream firms cutting back their production due to the low energy prices and therefore makes a great deal of sense. After all, the lower production means lower volumes and therefore there is not as much need for some of the growth projects that midstream companies were previously working on. Pembina Pipeline is no exception to this and has revised its own growth ambitions in response to the current conditions. Prior to the pandemic, Pembina Pipeline had C$5.355 billion worth of new projects in various stages of development. It has since deferred C$4.545 billion of them:

It is important to note that these projects have only been deferred, they have not been cancelled. This is a very important difference because it means that Pembina may begin work on them at some point in the future once conditions have improved. It does however mean that Pembina Pipeline will no longer be delivering the near- to medium-term growth that we were expecting prior to the pandemic.

Pembina Pipeline has certainly not deferred all of the projects that it was previously working on, however. In fact, the company currently has C$810 million still under construction that is scheduled to come online between now and the end of the first quarter of 2021:

These projects provide the company with a great deal of near-term growth potential, which when combined with its stable business model gives us reason to believe that the company may indeed achieve its goal of generating a record adjusted EBITDA this year. The steep decline in the stock price indicates that the market may not be appreciating this and thus could be providing a savvy investor with an opportunity.

In conclusion, Pembina Pipeline’s stock price has delivered a rather terrible performance so far this year. However, this is not indicative of the underlying fundamentals. While the company will not deliver the growth that we were hoping for back in January, the overall story still remains strong and the company is on track to deliver record cash flow to its investors this year. The company is very well-protected against commodity price declines and even takes steps to ensure that it has minimal counterparty risk. Overall, this is exactly the kind of thing that we like to see in a midstream company. The fact that it pays monthly dividends only adds to its appeal.

Stock market holidays can create unique trading conditions where unusual price action can occur due to lack of liquidity. Trading gaps,flash crashes and seasonal trends such as Black Friday are some of the most notable […]