Criminal: a person with predatory instincts who has not sufficient capital to form a corporation.”

Today, we take an in-depth look at a retailer whose stock has surged over 800% since the March Meltdown lows on hopes that it will survive a near death experience brought about by the pandemic as well as other challenges in the retail space. Can the rally continue? A full investment analysis is presented in the paragraphs below.

Based in Elmsford, New York, Party City Holdco Inc. (PRTY) is the largest provider of party goods in North America. In addition to ~875 Party City and Halloween City locations in the U.S. and Mexico, the company designs, manufactures, and distributes party supplies, with its wares peddled in over 40,000 retail outlets globally. Party City was founded in 1986, sold to private equity in 2005, and went public in 2015, raising net proceeds of $397.2 million at $17 a share. Its stock currently trades at around $2.75 a share, equating to a market cap of approximately $300 million.

The company’s business model is relatively vertically integrated with 80% of the merchandise sold by its retail operation either self-manufactured (24%) or procured externally (56%). The company has two reporting segments. The bigger revenue generator is Retail, which consists of its brick-and-mortar locations as well as ecommerce generated primarily through its PartyCity.com website. Approximately 90% of those stores are company-owned with the balance franchised. Party City does not plan to expand its franchises, rather is electing to buy them up when the opportunity arises. This segment was responsible for 2019 sales of $1.75 billion, or 75% of total.

The Wholesale segment designs, manufactures, and distributes party goods, including tableware, balloons, Halloween and other costumes, novelties, and stationary throughout the world. Any sales of these products in the Party City retail locations are counted as Retail revenue. After intra-segment eliminations, Wholesale accounted for 2019 sales of $597.4 million, or 25% of total.

Even though Party City is the unquestioned leader in the party consumer products space – the Halloween portion of which is estimated at ~$9 billion annually – it has been buffeted by a series of headwinds since its IPO. First, its private equity handlers strapped it with ~$1.8 billion of debt before selling it to the public – more on this shortly. Just as important, Party City, like its specialty brick-and-mortar retail counterparts, is fighting for relevancy in Amazon’s (AMZN) world. It does have a storefront on Amazon, but with the consumer inundated with a plethora of options, online and elsewhere – like Halloween offerings from Walmart (WMT) and Target (TGT) – it is fighting an uphill battle.

These secular challenges had kept a lid on the company’s stock price, last approaching its IPO level in July 2018. Since then, cost inflation, a helium shortage, and the U.S.-China tariffs war have further impacted performance, culminating in a dreadful 3Q19 earnings report (-$0.28 vs. +$0.01 consensus – non-GAAP) and a dour assessment of its 2019 Halloween sales season, which accounts for approximately one-quarter of its year. This news not only cratered its stock price 67% to $2 a share in the subsequent trading session, but also compelled analysts to pull the plug on the stock, suggesting its only catalyst was valuation in the face of eroding fundamentals.

The trend of terrible execution continued in March 2020 with the announcement of 4Q19 results, which featured a $0.37 a share miss ($0.51 vs. $0.88 consensus) and a 5.1% decrease in brand comparable sales. It was concurrently announced that all retail locations would be temporarily shuttered due to Covid-19, offering only curbside pickup for online orders. The CEO was bounced into a board position and with financial markets in full freefall, shares of PRTY hit an all-time closing low of $0.27 on March 18, 2020, as concerns about an NYSE delisting and a possible bankruptcy filing in the medium-term future haunted the company. Later that month, Party City drew down $150 million from its asset-back revolving credit facility to help keep it afloat. 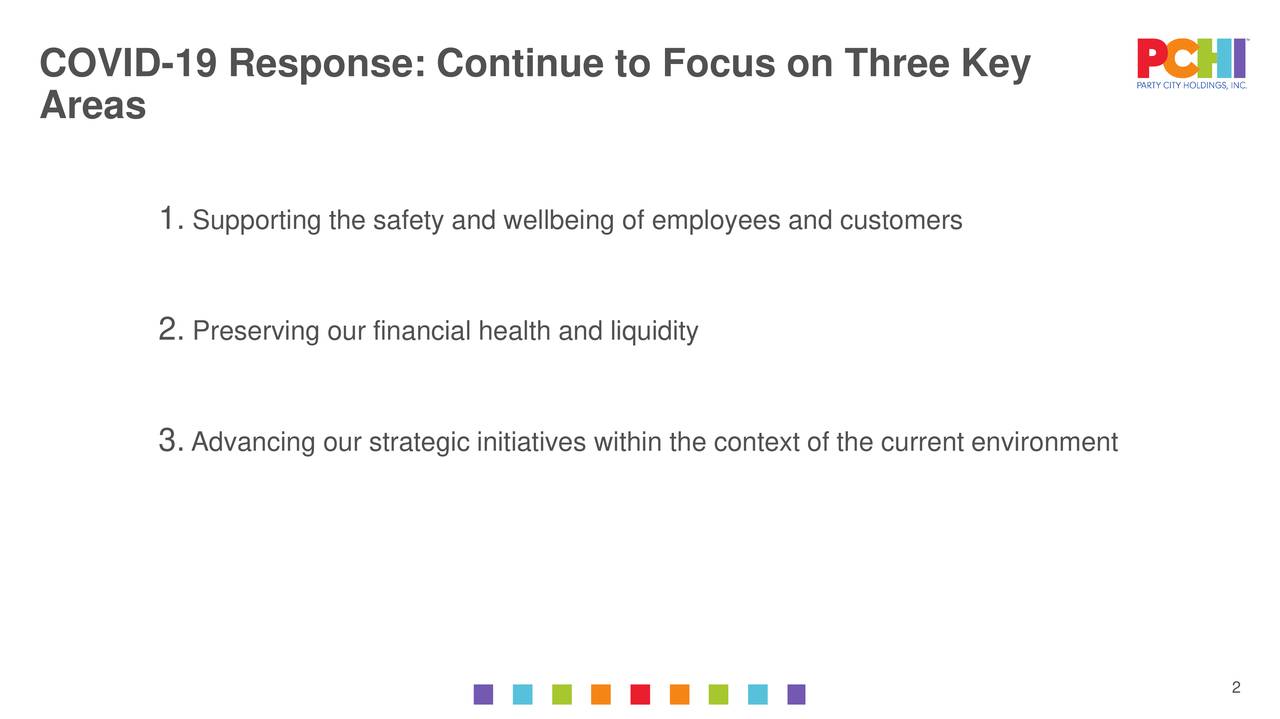 The company began reopening locations on May 1, 2020, with substantially all locations back in business by June 22nd. Although 2Q20 brand comparable store sales were down 52.4% versus the prior year period, online commerce – be it buy online pickup in store, curbside pickup, or same day delivery – soared 83%. More impressively, for the cohort of stores opened for the entirety of June, comps were up 6.3% when all ecommerce transactions that ran through the brick-and-mortar locations were added to the mix. Management also indicated on its 2Q20 conference call that July brand comps were positive. On the wholesale side, business halved in 2Q20 versus 2Q19, although it was trending higher in June, at ~70% of prior-year period sales, with July demonstrating additional improvement over June. 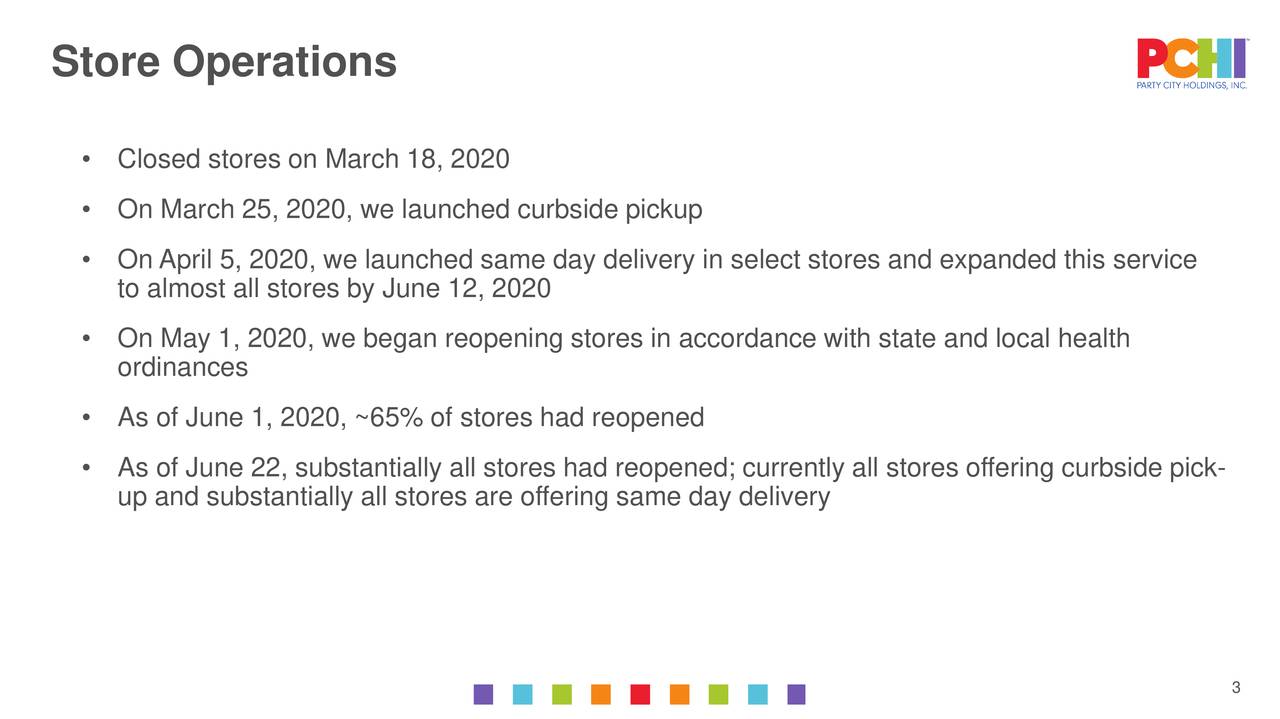 With total debt at $1.9 billion, ~$105 million of forecasted 2020 interest expense, a leverage ratio of 16.5, a credit rating downgrade from Moody’s (B2 to Caa1), and a NYSE delisting looming, Party City needed to extend its debt maturities, reduce leverage, and get more cash on its balance sheet. These requirements were fulfilled with an exchange offering that was announced on May 29, 2020, eventually closing on July 30, 2020. 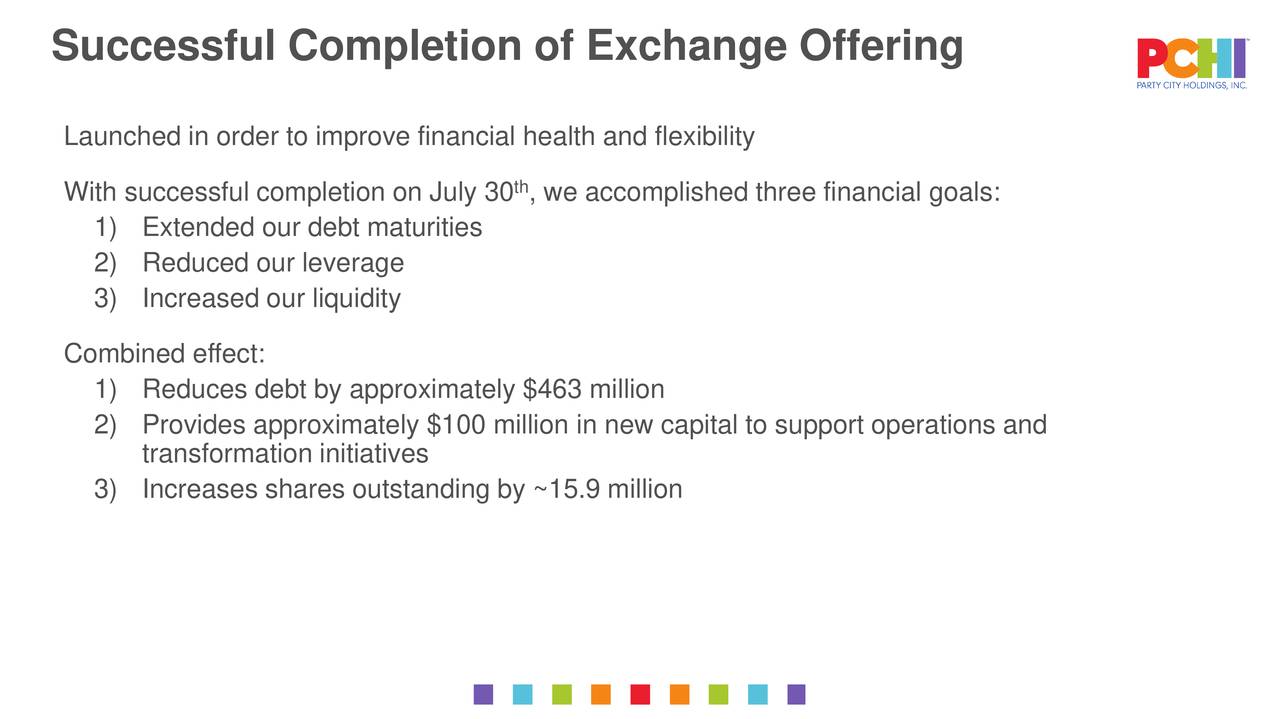 In a separate transaction, its Anagram (party balloon) subsidiary issued $110 million of first lien notes due 2025. The net effect of these moves reduced debt by $463.4 million, cut 2020 interest expense by ~$25 million to ~$80 million, and added ~$100 million of cash to Party City’s balance sheet while diluting shareholders by ~17%. The investment community was impressed with this reset of the company’s capital structure, raising its share price from $1.02 on May 28, 2020, and never looking back, allowing it to regain compliance with the NYSE listing standards on July 7th.

Operationally, Party City indicated that it plans to permanently close 21 stores, open 4 new locations during the balance of 2020, while shifting the opening of another six stores into 2021. The company also indicated that its capex spending will be roughly $35-40 million, down from its initial forecast of ~$65 million at the start of 2020, with a Retail/Wholesale split of 33/67.

Despite the positive response from the investment community concerning the exchange offering, Street analysts are still cautious on Party City’s long-term prospects, sporting four hold ratings versus one outperform. Their median twelve-month price target is a paltry $2.

Beneficial owner Clifford Sosin, on behalf of CAS Investment Partners, has a much different take than the Street’s sell-side analysts, purchasing over 1.4 million shares in August 2020 between $1.66 and $2.02. His ownership stake is ~11%. The skeptical could view this as someone cost averaging a bad position. However, Mr. Sosin is not alone in his enthusiasm for Party City. Board member Norman Matthews purchased 250,000 shares of PRTY on August 20th at $2 and then another 185,000 shares on September 3rd. It should be noted that several large shareholders filed to sell just over 13 million shares late in September, these are mostly institutions such as Neuberger Berman.

Investors who had the gumption to purchase shares on the close of the March 18, 2020, trading session at $0.27 would have realized an almost 900% return on their investment in the span of five plus months. And the stock appears unbelievably cheap on a price to sales basis, trading at 14% of 2019’s top line. However, for the prospective investor, a large debt load amounting to leverage of 13.3x is very worrisome. Admittedly, the Adj. EBITDA metrics are all out of whack, owing to the unprecedented nature of 2020. Using 2019 results (Adj. EBITDA of $269.2 million) as a guide, leverage would drop considerably, but to a still troubling 4.8x. The question is whether the company can return to 2015-2018, when it generated ~$400 million of Adj. EBITDA annually, bringing its leverage closer to 3x, making debt refinancing more viable.

The bullish bet here would be that the retail side of the business (meaning celebrations such as graduations and Halloween parties) returns with a flourish while corporate events have a more tepid trajectory. Will its emergence from coronavirus be enough to halt the secular bear trend that is devouring brick-and-mortar specialty retailers? Longer term, probably not. But there may still be a good trade in the stock before its ultimate day of reckoning.

However, at best this name is a lottery ticket after its big rise over the past five months. I am passing on making any investment recommendation due to balance sheet worries, little certainty on the economic restart/Covid-19 containment fronts, and the general longer term malaise in the retail space. I do offer up this analysis to those that might have greater risk tolerance and/or more confidence in a continued economic rebound.

A criminal remains a criminal whether he uses a convict’s suit or a monarch’s crown.”― Victor Hugo

Bret Jensen is the Founder of and authors articles for the Biotech Forum, Busted IPO Forum, and Insiders Forum

Author’s note: I present and update my best small and mid-cap stock ideas that insiders are buying only to subscribers of my exclusive marketplace, The Insiders Forum. Our model portfolio has more than doubled the performance of the Russell 2000 since its launch. Membership also includes our lucrative ‘option play of the week’ feature. Join our community today by clicking on our logo below!

Stock market holidays can create unique trading conditions where unusual price action can occur due to lack of liquidity. Trading gaps,flash crashes and seasonal trends such as Black Friday are some of the most notable […]