As forecasted, silver prices experienced their biggest one-day spike since September and broke out of a month-long, downward-sloping consolidation range (white-dotted lines). This came as XAG/USD was trading in an ever-shrinking zone of indecision between support at 17.440 and the upper ceiling of resistance. Silver may be at the beginning of what could be another bullish spike, but the path forward is not without its bumps.

Despite XAG/USD’s rally, the precious metal will now have to face resistance at 18.390 (gold-dotted line) that marked the end of its ascent from the prior bullish spike. Beyond that, silver prices will have then have to clear familiar but formidable resistance at 18.625 and the January 8-high at 18.853. Upside pressure around these levels may begin to show signs of exhaustion and a subsequent pullback may ensue.

Palladium prices have again clocked in new highs above $2,600 after coiling up between the December uptrend and resistance at 2499.60 (purple-shaded area). XPD/USD is now in charted territory, making mapping its trajectory difficult since there is no precedent for Palladium prices at these levels. Having said that, since XPD/USD cleared resistance with bold follow-through, it may signal bullish sentiment has reignited. 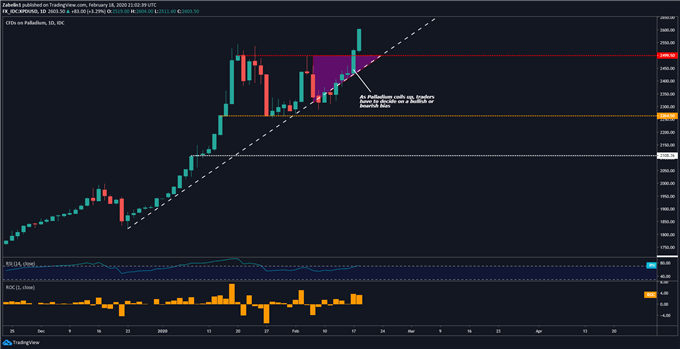 Torsten Asmus Commodity prices peaked in early 2022. Gold reached a record $2072 per ounce high on the nearby COMEX futures contract in March. Soft red winter wheat futures on the CME, the benchmark futures […]

© Reuters By Liz Moyer Investing.com — Stocks wobbled on Tuesday as investors looked forward to Friday’s report on jobs for November that could signal a softening labor market. Before that, data on and new […]