Osisko Gold Royalties (OR) announced details of its plan to spin-out its mining assets. The Cariboo Gold project, Bonanza Ledge II project, and San Antonio project, along with some other projects and marketable securities worth approximately C$116 million will be transferred to a new company named Osisko Development. Osisko Development will be led by Sean Roosen and after a C$100 million equity financing, it should be well-capitalized to become a 100,000 toz gold per year producer by 2022. But the main goal is to become a mid-tier gold producer after Cariboo gets into production.

Osisko acquired Barkerville Gold Mines and its Cariboo Gold Project almost exactly one year ago. As can be seen in the chart above, the initial market reaction was negative, sending the share price steeply down. Despite the positive gold price development, Osisko was unable to recover from this decline and it reached the September 2019 share price levels only lately. Meanwhile, the majority of other precious metals royalty and streaming companies recorded significant share price growth. The recently announced spin-out transaction should help Osisko to return back to the traditional royalty/streaming model. Meanwhile, Osisko Development will become a project developer and soon also a gold producer. Osisko Gold Royalties will get rid of the operational risks related to project development and mining operations, while it will retain exposure to the projects by keeping royalty interests.

Osisko Gold Royalties will advance Cariboo and the other abovementioned assets to Barolo Ventures (OTCPK:RNGTF) in exchange for Barolo’s shares. In fact, Osisko will make a reverse-take-over of Barolo. Subsequently, Barolo will change its name to Osisko Development, it will appoint a new management team consisting of Sean Roosen and other people from Osisko Gold Royalties and also a 60:1 reverse split will take place. Moreover, a C$100 million ($75.4 million) equity financing will be arranged under the equity financing, Osisko Development will issue 13.35 million subscription receipts priced at C$7.5 ($5.66). Each subscription receipt will consist of 1 share and 0.5 share purchase warrants with a strike price of C$10, valid for 18 months following the closing of the reverse-take-over transaction.

After everything is completed, probably by the end of this year, Osisko Gold Royalties will own approximately 88% of Osisko Development, with some 11.8% owned by the new equity investors and 0.2% owned by the current shareholders of Barolo Ventures. Moreover, Osisko Gold Royalties will retain a 5% NSR royalty on the Cariboo Gold Project and the Bonanza Ledge II Project, a 15% gold and silver stream on the San Antonio Gold Project (with ongoing payments of 15% of the prevailing gold and silver prices), and 3% NSR royalties on the James Bay, Coulon, and Guerrero Properties. The three projects alone should be able to boost Osisko Gold Royalties’ attributable gold equivalent production by nearly 20,000 toz gold (9,250 toz – Cariboo royalty; 1,550 toz – Bonanza Ledge II royalty; 9,000 toz – San Antonio stream). Osisko Gold Royalties will also have the right of first refusal on all future royalties and streams to be offered by Osisko Development. 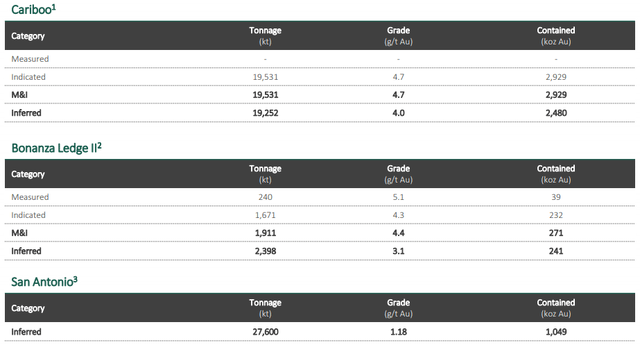 The Bonanza Ledge II Project is located on the Cariboo property. It’s a relatively small deposit with measured and indicated resources of only 271,000 toz gold and inferred resources of only 241,000 toz gold. However, its development is very advanced and only C$19 million ($14.3 million) of the initial CAPEX remains to be invested. The gold production at this small-scale underground mine should start in Q1 2021 and according to the current mine plan, 62,000 toz gold should be produced over the first two years. Given the size of the resources and the potential to discover more gold in the area, the production will most probably last much longer than two years and also the annual production rates should improve.

The San Antonio Project is located in Sonora, Mexico. It contains inferred resources of 1.049 million toz gold. It is a brownfield project that was acquired by Osisko Gold Royalties from forbearance for $45 million. Although it was originally a copper mine, Osisko focuses on the gold resources and intends to develop an open-pit heap-leach operation. The permitting is underway and Osisko believes that San Antonio can be put into production sometime in 2021, at a cost of only $25 million. The annual production rate should be 50,000-70,000 toz gold, but the longer-term aim is to delineate more resources and expand the mine.

And, of course, Osisko Development’s cornerstone asset is the Cariboo Gold Project. It is located in British Columbia and it covers a large area of 2,071 km². Numerous known deposits and exploration targets are situated on the property. The exploration potential is really huge. As a bonus, Osisko Development will own also a fully permitted 1,000 tpd Quesnay River Mill located in the area. 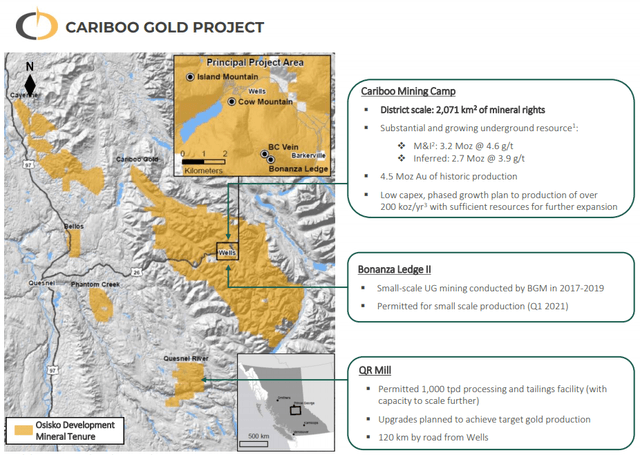 Osisko expects the Cariboo feasibility study to be completed in H2 2021. The economics of the project should be improved. The mill throughput rate should be expanded from 4,000 tpd to 4,750 tpd, which should lead to an average annual production of almost 220,000 toz gold (assuming that the other parameters such as gold grades and recoveries remain unchanged). Osisko also promises significant improvements to the mine plan, which should mean not only higher average annual production rates but probably also longer mine life. This all should lead to higher NPV as well as IRR (assuming that the AISC and initial CAPEX don’t increase too much). The mine permitting is underway and also the bulk sample scheduled for early 2021 may turn out to be a strong catalyst, if it provides good results. 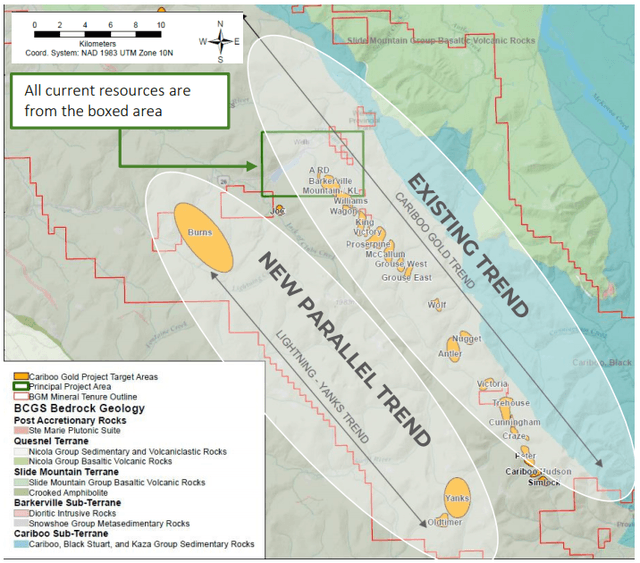 The district-scale potential of Cariboo is indicated also by the map above. There are two parallel mineralized trends on the property, with a combined strike length of over 80 km. And the current resources of more than 5 million toz gold come only from a small area 3.8 km along one of these trends. Moreover, the resources were delineated to depth of only 350 meters and there is potential for further expansion at greater depths.

The plan looks good. Osisko Gold Royalties will become a purer royalty/streaming play that may attract new investors. And a new mine development (and soon also gold producing) company will be established. However, it is not clear whether, when, and how many shares of Osisko Development will be distributed to shareholders of Osisko Gold Royalties. The corporate presentation only states that Osisko will be disciplined in reducing its ownership position as various corporate milestones are attained. This uncertainty (along with gold price weakness) is probably the reason why the reaction to the spin-out news was been relatively muted. Osisko Gold Royalties values the assets that will be transferred to Osisko Development at C$750 million ($480 million). It represents approximately 25% of Osisko Gold Royalties’ current market capitalization. It will be interesting to watch how much value this transaction manages to unlock. Right now, Osisko is relatively cheap compared to its peers. Given that a re-rating should follow the spin-out, Osisko becomes the most attractive of the big precious metals royalty/streaming players.

Disclosure: I/we have no positions in any stocks mentioned, but may initiate a long position in OR over the next 72 hours. I wrote this article myself, and it expresses my own opinions. I am not receiving compensation for it (other than from Seeking Alpha). I have no business relationship with any company whose stock is mentioned in this article.

US Dollar Fundamental Outlook: Bearish Strong corporate earnings could punish the haven-linked US Dollar Delays in fiscal stimulus may trigger risk aversion, catapult havens US GDP data for Q3 may be strong, but Q4 will […]