ServiceNow (NOW) provides software solutions to organize and automate business processes through a SaaS delivery model. The company mainly focuses on IT functions of enterprise customers even though, more recently, it expanded into other areas such as HR service delivery, customer service and security operations.

In Q2-20, subscription revenue came in at $1.016 billion, 30% growth YoY. Total revenue of $1.071 billion grew 28% YoY, $17 million ahead of analysts’ estimate. In Q2-20, the company had 40 deals in excess of $1m and 2 deals over $10m. Positive momentum was seen in both customer service and human resources divisions, with ServiceNow now having 964 clients generating more than $1m in annual contract value (ACV). Non-GAAP subscription billings grew 26% YoY.

ServiceNow has been successful in conducting a typical land and expand strategy. The company started as a provider of SaaS solutions for IT Service Management (ITSM) and its success has come thanks to a flexible platform, a familiar interface and by becoming a single system of record for the IT function within an enterprise.

Having established itself as a leader in the ITSM space, with a rapid rise to around 40% of ITSM market share, ServiceNow is expanding into the much larger market of IT Operations Management (ITOM) by incorporating new features into its original platform. Moreover, the company successfully expanded its process automation approach to other areas beyond the IT function such as HR functions and customer service.

The company’s success has been rapid and, for the most part, organic. ServiceNow boasts an impressive 97% customer retention rate, reached by focusing on the 2,000 largest enterprises in the world (G2K); these companies continue to renew their contracts, with the average annual contract value doubling in the last three years. Moreover, renewal rate has been extremely constant over the past few quarters, reaching 97% in Q4-19, Q1-20 and Q2-20.

Interestingly, ServiceNow has no exposure to small businesses, which are generally less sticky than enterprise customers. The company not only maintains an impressive retention rate, but it is able to sell multiple products to one single customer, as 75% of its clients are multi-product buyers.

The majority of new ACV is still coming from IT Workflows (63%), followed by Customer & Employee Workflows (24%) and Now Platform App Engine & Others (13%).

As demonstrated by the positive renewal rate, ServiceNow’s business model is extremely sticky, with 95% of GAAP Revenues coming from subscription-based services (compared with 94% for FY19 and 93% for FY18).

William McDermott serves as president, CEO and Director of ServiceNow since November 2019. He previously served as a member of the executive board at SAP SE from October 2019 to November 15, 2019. He served as CEO of SAP SE since May 21, 2014 until October 10, 2019. McDermott received its B.S. degree in Business Administration from Dowling College, and he holds an M.B.A. from the Kellogg Graduate School of Management. He also completed the Executive Development Program at the University of Pennsylvania’s Wharton Graduate School of Management.

Gina Mastantuono serves as CFO and joined the company at the end of 2019. She previously held a position as CFO of Ingram Micro Inc. from December 2016 to December 2019. She began her career at Ernst & Young LLP in 1992 where she was a manager in the entrepreneurial services group. She is a CPA and holds a B.S. in Accounting & Business Administration from the State University of New York.

Chris Bedi serves as Chief Information Officer since 2015. Prior to joining ServiceNow, he served as CIO of JDSU from August 2011 to March 2015, where he was responsible for IT, Facilities and Indirect Procurement. He started his career at KPMG from June 1996 to April 2002. He holds a B.S. in Computer Science from the University of Michigan.

Independent directors are generally qualified and come from a variety of high-profile leadership backgrounds. Board member compensation consists of a typical fee of $22,000 to $70,000 annually plus $325,000 in restricted stock unit awards, which is comparable to peers. Executive compensation consists of a base salary, cash bonus and RSU awards. The variable component of cash bonus and RSU is based on new net ACV. Compensation seems appropriate and in line with other software companies and looks skewed towards equity compensation as a way to align management with shareholders.

As of June-20, the company has $2.3 billion in cash & equivalents (includes $1.5 billion in short-term investments), offset by $1.2 billion in interest bearing debt which includes $502m in capitalized operating leases, resulting in a net cash position of $1.1 billion. In terms of capital deployment, the company is not paying dividends (and will likely continue to do so in the foreseeable future) or repurchasing shares on a consistent basis and only makes small acquisitions, as growth has mainly been organic. Since 2012, the company has only spent an aggregate $240m on acquisitions.

Analysts are expecting ServiceNow to continue growing its top-line at a healthy rate, reaching $6.9 billion total revenue by FY2022; EBITDA margins are also expected to improve, normalizing around 31%-33% EBITDA margin. In a base-case DCF, top-line growth is expected to stay at or above 20% until FY2025, with total revenue reaching $19.4 billion by FY2029 (representing a 18.0% CAGR between 2020-2029). Revenue growth is driven by two main factors: (1) a high and stable renewal rate and (2) increasingly larger deals.

Enterprise Value is adjusted to factor in (1) value of options outstanding: as of June-20 there are 651k options outstanding at a weighted average exercise price of $92.87, 4.6y maturity, with total estimated value of $181m (34.6% volatility, 2.5% risk-free rate and current price of $453.09 per share). Note that all options outstanding, and not just vested ones, are considered (2) non-operating assets of $777m in long-term investments & financial assets (3) debt value of capitalized operating leases of $502m, 8.9y maturity, 3.5% discount rate (note: the 3.5% rate used by the company to capitalize leases is also used as a proxy for pre-tax cost of debt in the below DCF).

Below is the summary of a high-level DCF: 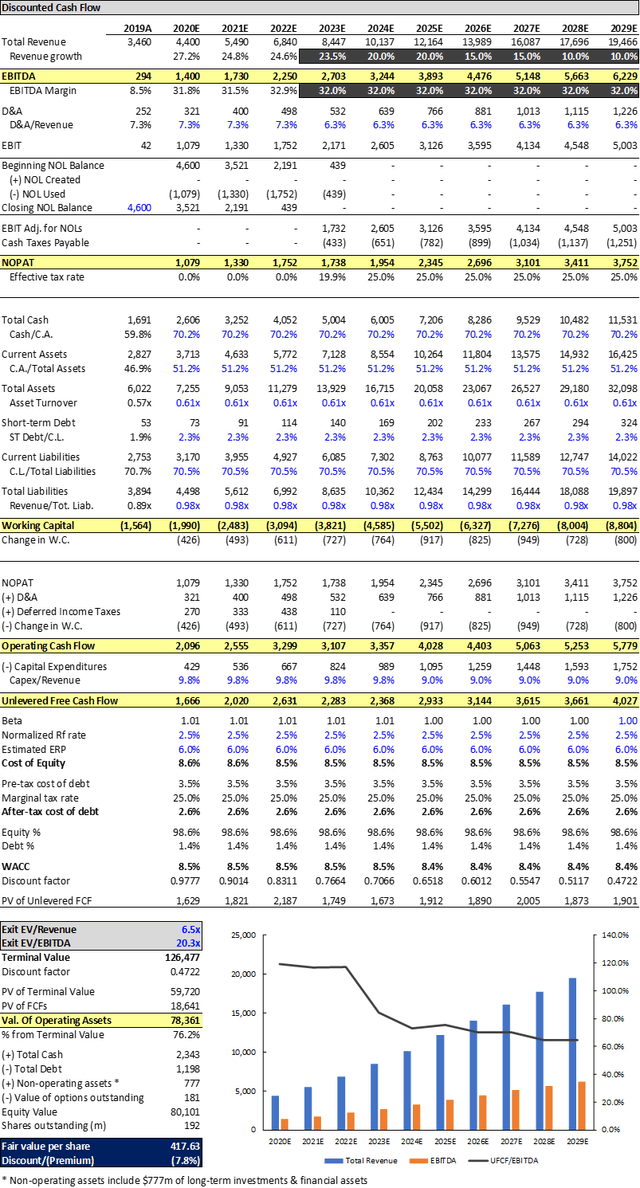 In the above model, a current price per share of $453.09 implies a 7.2x exit EV/Revenue in Year 10 (22.5x EV/EBITDA) which, again, seems plausible considering the high multiples at which the company is trading on an LTM basis and not too far off the 6.5x target exit. Moreover, a 7.2x exit is in line with the 7.1x median EV/Revenue of selected public comps: 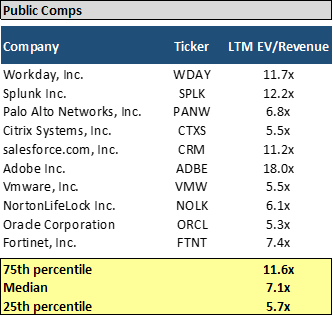 However, the company is still priced higher than most of its competitors (possibly rightly so given the strong competitive position and higher growth prospects) and any execution misstep could have an amplified impact of the company’s shares.

As noted above, valuation still looks high compared with peers, even though a DCF model seems to justify the premium given higher growth prospects.

ServiceNow has successfully gained market share by displacing legacy vendors with its SaaS offering but, as the company continues to expand in new areas of the enterprise, it is likely to encounter increased competition. For instance, moving into the customer experience segment will mean increased direct competition with salesforce.com (CRM).

Finally, as both CEO and CFO joined the company in the fourth quarter of 2019, they have limited experience with the team but, given their backgrounds, they will likely perform well in the years ahead.

Australian Dollar Talking Points AUD/USD takes out the September low (0.7006) ahead of the Reserve Bank of Australia (RBA) interest rate decision on November 3, but the future implications of the US Presidential Election may […]