We rarely discuss individual stocks in these pages, but we make an exception now and then when we spot exceptional opportunities. This time the reason is actually more mundane: the vast majority of gold exploration stocks failed to benefit from the rally in precious metals prices last year. As a result, many of them came under even greater pressure in the tax loss selling season at the end of the year. We made a list of such stocks late last year – a PDF document is provided below this post. Here is an example of such a stock:

ATAC, one of many exploration stocks that came under selling pressure in last year’s tax loss selling period.

ATAC (OTCPK:ATADF) is actually a fairly solid company as exploration companies go – it has a large land package in the Yukon territory, a PEA-supported high grade resource, a second fairly large high grade resource (which unfortunately consists of hard-to-treat refractory ore, which puts grade into perspective) and numerous scout drill holes suggest there is potential for more discoveries.

And yet, the stock has been in a downtrend for several years. As the weekly chart shows, it traded above 70 cents both in 2016 and 2017. If one goes even further back, it traded actually as high as $4.40 in late 2011 when gold peaked. Naturally, the share count has increased since then, but on the other hand, the drill programs that were funded by share issuance have been reasonably successful. 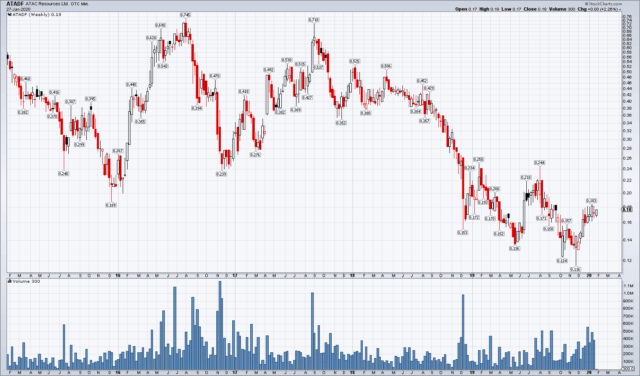 If this were the case with just one exploration stock, we would suspect that there is a problem at the company we don’t know about. However, the vast majority of small exploration stocks has fared extraordinarily poorly in recent years. Only a handful of stocks with exceptional news flow have managed to deliver a half-way decent performance in line with the rally in gold.

Right now may actually not be the best time to make our list available, since net speculative positioning in gold futures is quite stretched (and has been for a while). We believe that positioning extremes in gold futures have shifted upward, as this has happened in numerous other futures markets as well in recent years (most notably in crude oil, where the extreme in net speculative length has grown from around 120,000 contracts to 850,000 contracts over the past decade).

Still, as a percentage of open interest, the net speculative long position in gold futures is clearly at the upper end of its long term range, although it remains below its highs of 2016 and 2019. It is therefore possible that it will expand further, but there is undoubtedly a limit to this process: 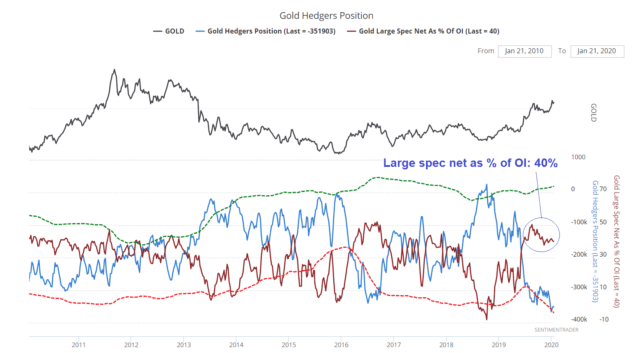 Net position of hedgers according to the legacy CoT report, and the net position of large speculators as a percentage of open interest (currently it stands at 40%, the high was at around 51%).

A large net speculative long position is not a bearish datum per se – in fact, it is normal during bull markets. Nevertheless, once it becomes this large it does make the market vulnerable to a setback and will tend to exacerbate a correction once it gets underway. Note that exploration stocks are actually less sensitive to gold price movements than producers in the short term, but they are not entirely immune.

Luckily, there is no hurry anyway. When we made the list, we started out by looking for stocks that were a) subject to tax-loss selling and b) struck us as interesting for at least one other reason (insider buying, extremely low valuation, etc.). Initially we did not differentiate on the basis of quality, which means that the list contains both highly speculative stocks and some that are at least supported by assets one can put a rough valuation on. Obviously, exploration stocks are generally very risky, but to different degrees.

We then proceeded to enlarge the list by adding several names we do consider to represent exceptional quality within this sub-sector. Many (but not all) of the stocks in this category happen to be among the exceptions that have shown noteworthy strength over the past year. This means of course that they are no longer as cheap as they once were – but in all cases this is for very good reasons. Here is an example of a high quality exploration stock: 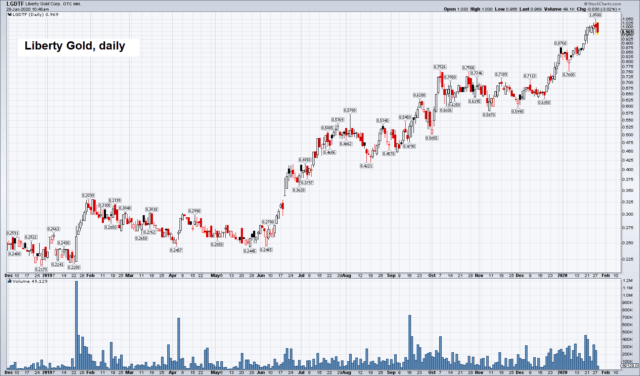 Liberty Gold (formerly Pilot Gold) (OTCPK:LGDTF) – the successor company to Fronteer Gold, which was taken over by Newmont in 2011 for more than $2 billion for its Long Canyon discovery. Long Canyon is a fairly small operation by Newmont’s standards, but it has by far the highest profit margin of all NEM mines. The former management of Fronteer is now managing Liberty, which inherited all remaining Fronteer assets – and it appears the company has made another major discovery (details in the list).

We would not advocate chasing stocks that have become “overbought,” but it cannot hurt to be aware of certain names and to keep an eye on them. After all, an opportunity may present itself at some point.

You will also notice that our original plan – namely to benefit from a “post tax-loss selling bounce” has not exactly worked out as envisaged. Many of these stocks have failed to bounce thus far and some have even declined further. Others have experienced feeble bounces (ATAC falls into the “feeble” category), and only very few have really shown significant strength – usually driven by news. All in all one could say that the strong stocks have remained strong, while most of the weak ones have remained weak.

This is a bit of a disappointment, as rallies after strong declines driven by year-end tax-loss selling were often quite vigorous in the past (it was not unusual to see micro-caps double or triple in price). As a result of this, one should definitely ignore the technical targets we have penciled in on the charts (these are in any case little more than price ranges derived from glaringly obvious lateral resistance levels). So what does the list have to offer?

First of all, note that the charts in the list are slightly dated by now, as it was put together at the end of last year. Since all symbols (both Canadian and US OTC symbols) for the stocks are supplied with it, one can quickly get up to date on the chart situation via stockcharts.com or some other charting service, so that should not pose much of a problem. Again, keep in mind that the “target ranges” are best ignored.

What we have done otherwise is this: we provide a brief description of every stock, i.e., the most salient fundamental information. Some of these descriptions are very brief, some are more comprehensive. We have also awarded “ratings” reflecting our risk assessment (the rating system is explained in the document). Naturally, one should not rely on this in any way, as these ratings are just subjective guesses based on very rough estimates of value, but we felt providing a rough guideline might be useful.

We have also added a note to every stock regarding recent insider activity – if it was noteworthy and has taken place within the past six months (only one of the companies on the list has actually seen sizable selling by insiders, which seemed mainly motivated by vested options having moved well into the money; there are quite a few stocks with sizable insider buying).

In short, if the sector is of interest to you, the list may be useful as a starting point for doing your own due diligence. Perhaps you will also discover the odd stock you have not heard about before. Note: we have included just two companies that are already producing gold and silver (but are concurrently engaged in extensive exploration activity).

As a final caveat we should perhaps mention something Steve Saville of Speculative Investor recently said regarding the poor performance of exploration stocks. Steve remarked that it is possible that the rise of passive investing via ETFs has eaten into the pool of buyers (mainly consisting of retail investors) who used to drive rallies in this speculative sub-sector. In the absence of this group of buyers it may generally have become more difficult for decent sector-wide rallies to develop.

We concede that this argument has merit, but it remains to be seen if it is merely a temporary phenomenon or a permanent one. It probably depends on what gold does in coming months and years and also on whether any truly exciting discoveries are made going forward. A few recent discoveries actually look quite promising, but we are still waiting for something truly spectacular to fire up imaginations.

Oh, and make sure you read the disclaimer at the end of the document – we are not investment advisors, so this document is for information and discussion purposes only. Enjoy!

Readers have probably noticed that the blog went on an extended hiatus around the turn of the year. Also, we post only rarely these days – as our long-time readers know we are battling with poor health and while we are happy to report that things have improved, we are still far from fully restored. This is the main reason for the reduction in posting frequency – hopefully this will gradually get better this year (that is the plan, anyway).