A framework we like to use to think about the interplay between fiscal and monetary policies is something we’ll call string theory. If the economy is a kite, then monetary policy is the string. Normally, the central bankers of the world prefer to establish a stable monetary policy that allows our economic kites to fly higher, but not too fast as too much string/slack could lead to runaway inflation and flyaway kites. Thus, there are always periods of adjustments, sometimes, tension (i.e., monetary policy) on the line is increased and other times decreased. In times of distress though, central bankers will relax the tension and allow the kites to catch any wind as the breeze of demand wanes.

While decreasing tension and giving more line can help, ultimately, the kites still need wind (i.e., demand) to fly. In a normal functioning economy, this demand is fairly stable, but in a COVID-19 world? Not so much. This is where fiscal stimulus (i.e., government spending) can step-in and provide an updraft to keep the kite aloft until normal trade winds recover. Aggressive fiscal stimulus can help bridge us over the challenging times by temporarily lifting consumption. In essence, what the free market can’t provide, government spending/funding can generate.

Without fiscal stimulus, however, monetary policy alone will likely be insufficient when economic activity falls too quickly. Without adequate demand, without a breeze, giving the kite more line proves ineffectual. Central bankers are effectively pushing on a string. So, ideally, the economy needs the government to provide both as the country recovers from the COVID-19 pandemic. Unfortunately, things are seldom idyllic when politics are involved.

We didn’t even need to see the latest personal income figures from the Bureau of Economic Analysis to know that unemployment benefits and the recovery in income were likely to dip as the multitude of federal benefits under the original CARES Act began expiring. Sure enough, when September figures were released, they confirmed our suspicions.

Now, what creates demand is employment, it’s the first step. Employment equals income and income equals spending (i.e., demand). For September, the unemployment rate fell to 7.9% as the number of jobs increased by 661K (non-farm payrolls). On its face, this appears to be a solid reduction, but dig a bit deeper and we can see that the civilian labor force fell by 695K, so a large part of the decline in unemployment rate actually comes from workers leaving the labor force.

Overall, the labor picture continues to paint a portrait of a weakening recovery. What started robustly has now begun to fade. After adding on average of 2.5M jobs per month since May, August figures were decidedly lower. The longer the pandemic lasts, the more energy it’s sapping away from our recovery. The stop/start nature of localized restrictions and quarantines creates enough uncertainty for most employers to back away from aggressively rehiring, which means the economic recovery continues to be put off. Moreover, the longer this lasts, the more things will stay permanent as we can see permanent job losses increasing. 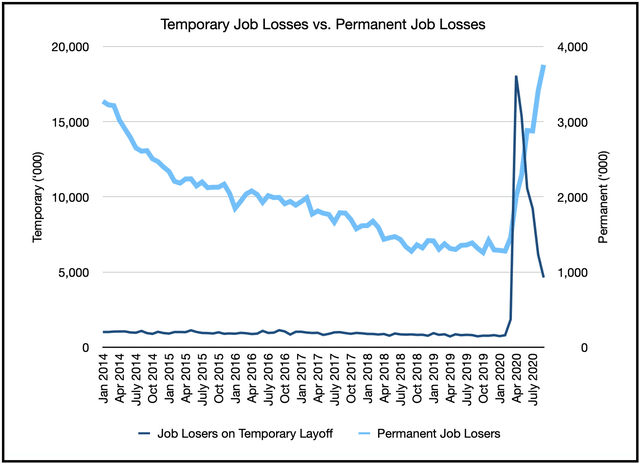 All of this translates to lower personal income, and we are still a ways off from our “normal” pre-COVID-19 levels. A 7.9% unemployment rate means we’ve shed 9.5M jobs YOY. In turn, personal income is $4-500B (annualized) lower, and the transfer payment from the government (i.e., all of those stimulus checks and extra federal unemployment benefits) that bridged us over the gap has begun to expire. In aggregate, the funds have begun to fall materially. 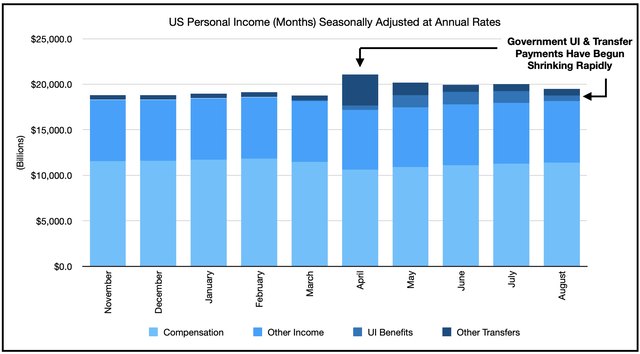 In turn, we can see personal savings (as a % of disposable income) fall further as the months drag on. 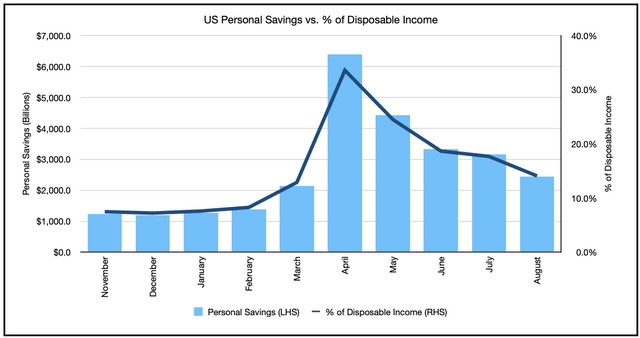 Notice the large increase in April when the government rained down $1,200 stimulus checks and extra unemployment benefits, well that’s since whittled away as households dip into their savings to pay rent and other expenditures. What we need now is another round of fiscal stimulus, to artificially prop up the economy as we wait for the vaccine.

To Stimulate or Not Stimulate… That is the Question

Last week, reports of on/off discussions between House Speaker Nancy Pelosi and Treasury Secretary Steven Mnuchin appeared to be yielding results on rejuvenating a stalled stimulus bill, no doubt aided in part by the thousands of layoffs announced throughout the week by airlines and affected industries. Following constructive talks, however, a different tale emerged this week after the surprising news on Friday that the President and a host of West Wing staffers had contracted COVID-19.

A Stay at Walter Reed

This was a bombshell revelation and the media breathlessly covered his hospitalization over the weekend. After being discharged from Walter Reed, the President is now recuperating in the White House. His campaign, unfortunately (or fortunately depending on who you support), is now the ICU.

The damage may have already been done as predictive markets (i.e., gambling sites) saw former Vice President Biden’s chances of winning surge past 60%. Equally as important is that Democrats are now projected to win 50 seats, and if a Biden administration is ushered in, then we can expect a larger “Green Energy” stimulus following the one currently being negotiated.

This likely explains why the Democrats have been hesitant to compromise on a “lesser” fiscal stimulus than their current $2.2T offer. As the likelihood of a “Democratic Blue Wave” sweep has increased, Democrats have held firm on the higher figure, believing correctly that Republicans, and in particular, the White House, need a deal more than they do. If Democrats were to win both the White House and Senate, then a larger stimulus bill can be had in short order, so why compromise at this stage?

Republican Senators similarly see the writing on the wall. With a mortally wounded Presidential campaign, and the likelihood of a Trump win diminishing, Republicans have had to shift their focus, from fealty to the current administration to one where they can uphold “traditional” Republican values (i.e., perceived fiscal conservatism). If the voters don’t vote for Trump, what you don’t want is to have that choice cascade down ballot. So, it’s time to differentiate yourself.

Thus, we believe the President’s recent rejection of the stimulus package wasn’t that he disagreed with the price tag. He is after all a “deal maker,” it’s more likely he couldn’t sell Republicans in the Senate on the matter. In the end, barring a miracle breakthrough, the size and timing of any stimulus bill will depend on who wins the election (both White House and Senate).

As investors though, we can clearly see our economic recovery stalling here. So, while we understand the balance of power and the massive momentum/leverage swing to the Democrats, we can’t help but wonder how many more layoffs and unemployed workers we will have in the near future because political needs outweighed economic ones. Sadly, if there’s one thing certain in Washington during election season, it’s that a politician’s impending unemployment will outweigh yours.

For the market though, a few catalysts are fast approaching. We expect to hear in a few weeks the results of Pfizer’s (NYSE:PFE) vaccine trials, as clinical data is set to be released sometime in late-October. If efficacious, expect an accelerated FDA approval. The EU and Japan will likely leverage the data and quickly follow suit, and then we’re off to the races in terms of manufacturing. Other vaccines should follow in short order (e.g., Moderna (NASDAQ:MRNA), AstraZeneca (NASDAQ:AZN), Inovio (NASDAQ:INO), or Johnson & Johnson (NYSE:JNJ)). A week or two thereafter? Elections. The Big One.

As November 3rd approaches, we’ll begin to turn our attention to the type of policies a Biden administration will likely usher in. Taxes (i.e., raising corporate rates and taxing offshore intangibles), Green Energy (subsidizing renewables, restricting access to drilling on federal lands, and carbon neutrality), MAGA to Making America Cool Again with a reset of international/trade relations, and etc. All of these things will impact corporate earnings, tax policies (corporate income to customs/tariffs), interest rates, and the strength of the dollar, which means it’s incumbent on us to work through some of these issues. We’ll endeavor to do so.

As always, we welcome your comments. If you would like to read more of our articles, please be sure to hit the “Follow” button above. Open Insights is a collaboration between HFI Research and Open Square Capital.