“Tesla Inc.’s shares rose 14% Tuesday to $887.06. They have surged 56% in the past week and have nearly quadrupled since early October. Those outsize gains don’t match Tesla’s more modest fundamentals, which include annual losses.”

“They do, however, resemble any number of other assets that have experienced prolonged bubbles, including shares of Qualcomm Inc. and other tech stocks of the dot-com era; oil in 2008 and bitcoin in 2017.”

At these prices, Tesla (NASDAQ:TSLA) is worth more than Ford (NYSE:F) and General Motors (NYSE:GM) combined. 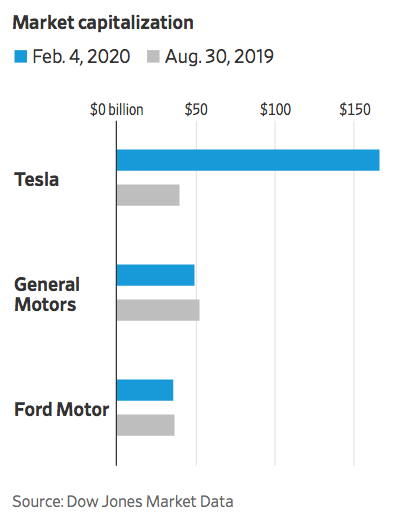 “Tesla can earn a lot more profit per car, and can sell a lot more cars than it does now, and still its stock is priced as if its future profits will be coming from some unnamed something that is not the car-making business.”

Shares outstanding is 180 million so the move from $969 to $860 erased $20 billion of market cap, in five minutes, on no news. These numbers are so crazy they seem almost meaningless but they make for a good sound byte in a video.”

“So Mr. Efficient Market, what do you make of that?”

I can’t resist the temptation to plug an old paper that I have long wanted to return to, “Stocks as Money.” I wrote it in response to the internet boom and bust, and the excellent Owen Lamont-Richard Thaler “Can the market add and subtract” in particular.

This pattern happens over and over (and over and over) again in financial markets. Surely, we can do better as an “explanation” than “people are dumb.” Or, as Lamont and Thaler put it so nicely,

“one needs investors who are (in our specific case) irrational, woefully uninformed, endowed with strange preferences, or for some other reason willing to hold over-priced assets.”

Patterns that are repeated over and over again need either irredeemable human folly – not much of an “explanation” as it can explain anything – or economics, a model by which rules of the game produce a strange outcome despite people in the game understanding the game and where it ends. That’s what “Stocks as Money” suggested.

Stocks as Money points out these events do not happen in isolation. High prices are only one symptom. They always occur with 1) huge price volatility (check); 2) huge share turnover (check); and 3) impediments to short-selling, especially at a longer horizon (check, more below) 4) in an asset where there is a lot of disagreement, a lot of potential news, a lot of different opinions about long run value. Bubbles do not happen in regulated public utility stocks.

So why would anyone buy Tesla?

Well, duh, because he or she thinks the price will go up in the next week or two. I venture that very few people are buying Tesla to line their retirement accounts and live off the dividends for 20 years. The level of Tesla’s stock – its long-run “overpricing” is pretty irrelevant to that trade. If the expected return of Tesla is even minus 6% per year, that’s 1/2% per month, or 1/8% per week. If you think Tesla will go up 20% in a week, that is a tiny cost of doing business – less than transaction costs and capital gains taxes on the trade. But from P/D=1/(r-g) it takes a lot less than -6% per year expected return to drive the price level to the stratosphere.

OK, but for every buyer there is a seller and someone who thinks it will go down 20%. Why don’t short-sellers push the level of the price down? Now you know why item 3 impediments to short-selling are important. If you think Tesla is overvalued, and must at some point in the next 5 years come down to earth, it is still awfully hard to trade on that opinion.

First, you have to find shares to borrow. This is hard, especially given that much of Tesla’s shares are held by retail investors. Then, if the price rises before eventually plummeting, you have to post cash against the loss of value of your position. Yes, a screaming sell became a scream from the mountaintops sell, but you need cash and you need it now. Vigna:

“Despite some short covering over the past few weeks, there is still $14 billion in short interest against Tesla, making it the most shorted U.S.-traded company.

Last fall, short interest in the stock was about 25%. As the price went up, some traders were forced to buy the shares they had borrowed when opening the short position. That drove the price up further, forcing other shorts to also buy, which in turn drove the price even higher. “And so on,”…”

Moreover, between when you borrow shares and when you sell them, you are holding shares of Tesla stock. Both buyers and sellers need shares. The demand for shares overwhelms the demand for stock.

So, in an environment where lots of investors have lots of (what at least they think is) news about the value of a stock, and want to trade at high frequency to profit on that news, the level of the stock can get pushed up, since nobody holding it cares about that.

The Money as Stock paper points out that this situation is exactly like money vs. bonds. Money is “overpriced” relative to bonds. But we hold money anyway because it provides “liquidity services.” In times of hyperinflation, money can be dramatically overpriced. You can earn 1,000% on bonds and zero on money. Yet people still hold money? Why? Well, not for a year, duh. They hold it for an hour or so in order to buy things.

The analogy makes other clear predictions that the “people are dumb” theory does not make. The overpricing should be larger as turnover is larger, and as the supply of shares is smaller. Check.

Just what is the “information” on which people are trading? I don’t know – I don’t trade. Surely, the process by which information makes its way into market prices – how actual news is passed around, interpreted, considered, and aggregated – is one of the things we understand least in asset pricing. It seems to need a lot of actual trading. The model that we announce demands, hear others demands, infer their information, wait, and the “auctioneer” posts a final price, at which nobody trades, is obviously wrong. Just as the microfoundations of money are important to understand what this venerated “liquidity preference” is (and whether it will last), similar investigation is important for finance. But that doesn’t stop us for recognizing the signs of a trading demand in stocks.

This view makes a prediction, however. The price spikes need limited supply of shares. If shorting were easier, especially in the long term, the price spikes would disappear. Most regulation, however, shows mostly interest in suppressing short-sellers. Easier share issuance would also help.

“Demand curves” for stocks do slope down, and I think this is a plausible mechanism. (Though “demand curves slope down” is repeated a lot, models of the phenomenon that go much past “people are dumb” – or rather “all those other people are dumb” – are pretty rare.) But the real question is why does the supply curve slope up? With a flat supply of shares, there would be no bubbles.