US stock markets moved lower on Tuesday as investors await the highly anticipated Federal Reserve interest rate decision tomorrow where the Federal Open Market Committee (FOMC) is expected to keep rates unchanged. The key data likely to affect markets, however, is the updated economic projections (SEP), which include rate projections from board members through the dot plot. The S&P 500 dipped 0.16% while the tech-heavy Nasdaq 100 gained 0.53% on the day.

The Fed has to balance an economy that is recovering at a faster rate than previously expected and keeping markets ensured that a loose policy setting will be maintained. Outside of the dot plot, markets will focus on inflation and GDP expectations. The Treasury market has already begun to price in higher inflation, with the 10-year yield now over 1.600%.

If the Fed doesn’t move its projections up, even modestly, it could risk disappointing markets. On the other hand, too much optimism and it may throw off investors who are anticipating policy to remain largely accommodative for some time. That is because this could raise prospects of a sooner-than-expected dovish policy unwinding. That said, markets may become more risk-averse if Fed Chair Jerome Powell fails to weigh investor concerns. 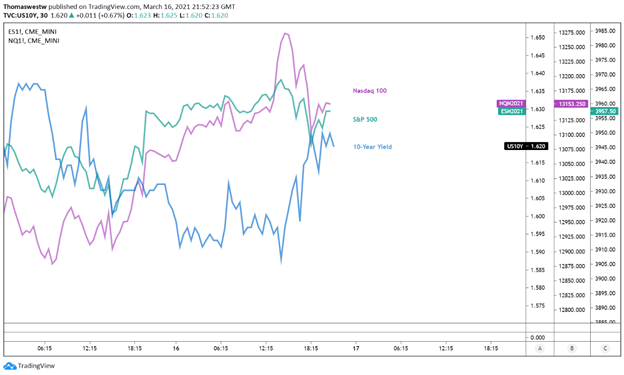 Learn how to become a more consistent forex trader

As with the United States, investors across the Asia-Pacific region will be keenly focused on the Federal Reserve’s March interest rate decision and commentary from Chair Powell. This morning will bring Australia’s Westpac Leading Index and balance of trade data from Singapore, according to the DailyFX Economic Calendar.

Later this week, New Zealand will release its Q4 gross domestic product (GDP) figures. Analysts are expecting a 0.5% increase on an annual basis and a 0.1% increase in the quarter-over-quarter figure. The data will help traders mull any decisions that may come from the Reserve Bank of New Zealand’s (RBNZ) meeting next month.

The New Zealand Dollar is trading in a range seen earlier this year after piercing below a key trendline earlier this month. Prices found support at the 78.6% Fibonacci retracement level before bouncing higher to test trendline, which now appears to be providing resistance after rejecting a move higher. Since then, the 61.8% Fib is underpinning prices.

That said, the Relative Strength Index (RSI) and MACD oscillators appear to be in a largely neutral stances. A move higher will run into likely resistance at the aforementioned trendline. Confluent resistance from the 100-day Simple Moving Average (SMA) may reinforce that trendline. TO the downside, the 61.8% and 78.6% Fib levels may continue to offer support. 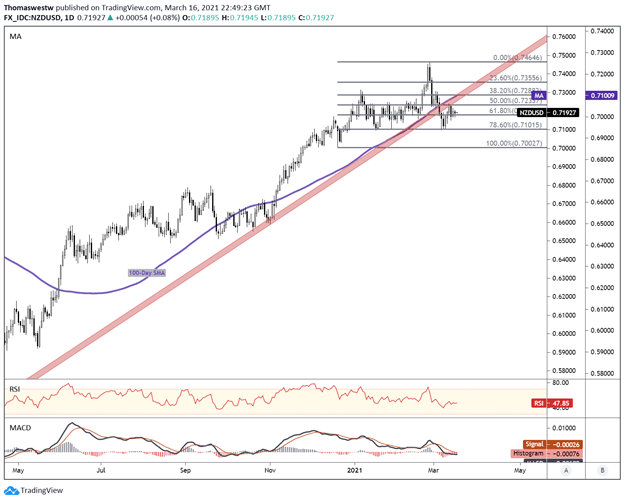