Nutanix (NASDAQ:NTNX) is a leader in services for the rapidly growing hybrid cloud market segment. In 2019, the company became deeply undervalued due to stagnant revenue as a result of moving away from hardware sales and switching to a recurring revenue model. The underlying business remains solid though and it is likely to achieve strong revenue growth and margin expansion through operating leverage in coming years, which should see the share price continue to appreciate in coming years.

(Source: Adapted by author from Gartner)

Nutanix is attempting to expand its addressable market by offering services further up the enterprise technology stack to try and capture some of the shift towards cloud computing and in particular the hybrid cloud. The hybrid cloud market was estimated to be worth approximately $36 billion in 2017 and was projected to grow at a rate of 21.7% annually through to 2025.

Nutanix provides an enterprise cloud platform which aims to deliver clients invisible infrastructure and allow IT personnel to focus on higher value add activities. Its hyperconverged infrastructure also helps companies to manage their local infrastructure like a cloud.

Nutanix’s market opportunity was created by the weaknesses of traditional enterprise infrastructure where specialist IT teams manage different silos of servers, virtualization, storage and networks as each silo has its own proprietary operating system, hardware platform and management interface. As a result, traditional enterprise infrastructure is not agile, is complex to deploy, does not scale and is typically overprovisioned and underutilized. In addition, existing virtualization products are often sold under restrictive enterprise license agreements.

Nutanix initially sold its data center software stack on its own branded servers, but customers also had the ability to run Nutanix’s operating system on hardware from Dell EMC, Cisco (CSCO), Hewlett Packard Enterprise (HPE) and IBM (IBM) amongst others. Hardware sales made up 26% of Nutanix revenue in 2017, but this was a low-margin commodity business which Nutanix decided to abandon in 2018 to focus on its software offerings. This has resulted in a drag on revenue growth in recent quarters, but will ultimately lead to improved margins.

Nutanix’s product suite aims to reduce the complexity and inefficiencies of enterprise IT management by integrating the traditional silos of server, virtualization and storage. Nutanix creates application mobility across private and public clouds, which enables hybrid cloud deployments resulting in increased agility, resilience, security and scalability and lower costs. In 2017, Nutanix’s CEO stated:

In the coming 12-18 months you will see us become a full-fledged networking and security vendor just like you’re seeing from VMware as well.

While this shift has better positioned Nutanix for long-term growth, it may be acting as a drag on growth in the short term as it tries to convince customers of the value proposition. 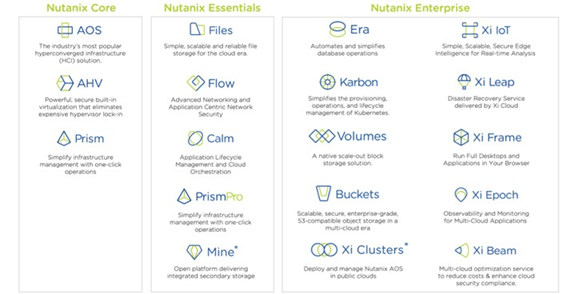 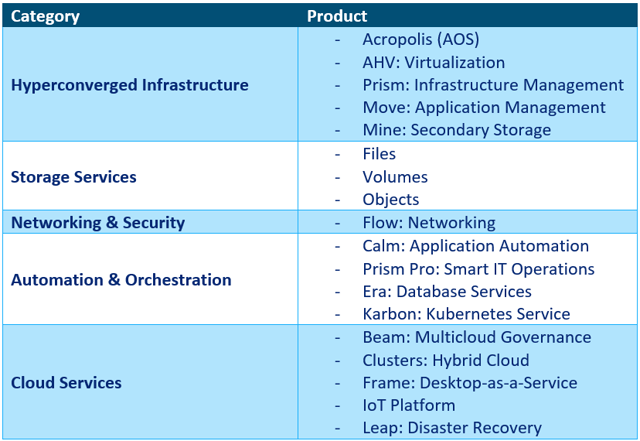 Hybrid cloud solutions tend to be adopted by older companies which have difficulty moving their IT infrastructure to the cloud or companies with specific concerns like data security or compliance. Combining public and private servers allows businesses to store the most sensitive information (identifiable customer information, confidential product details) on their on-site servers and use public servers for data backup and the storing of general business data. In addition, companies may not trust public cloud vendors with their data, particularly when those vendors are offering analytics services.

Nutanix continues to achieve strong growth in client numbers with over 13,000 end customers including 780 global 2,000 companies in 2019. Nutanix’s revenue per customer has been declining steadily over the past seven years, which is a concerning trend. This may reflect the addition of smaller and less valuable customers in recent years or it could be a result of rapid growth in new customers whose initial purchases are relatively low, but could expand over time. Declines over the past 12 months are at least partly due to a switch toward recurring revenue and the abandonment of the hardware business. 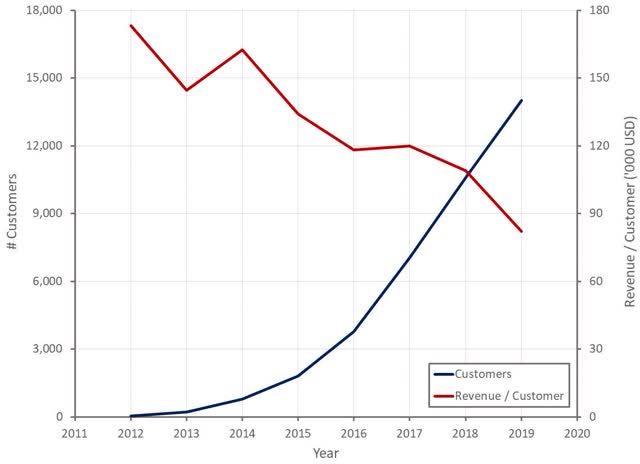 The lifetime purchase multiple of Nutanix’s customers has been rising in recent years indicating that the company is able to increase the value of retained customers over time, which is supportive of growth in the long run. The number of deals Nutanix has completed involving multiple products has also been expanding rapidly, indicating that Nutanix’s strategy of expanding its product offering is gaining some traction with customers. Investors should look for accelerating revenue growth and increased revenue per customer in coming quarters as confirmation of the success of the strategy. 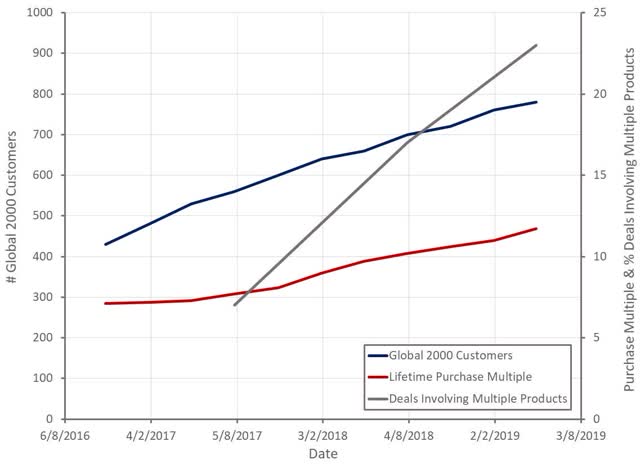 Nutanix is making steady progress in its subscription software business, expanding subscription revenue as a percentage of total revenue by 30% over the past two years. In addition, the average subscription length has been increasingly steadily and is now 3.7 years. 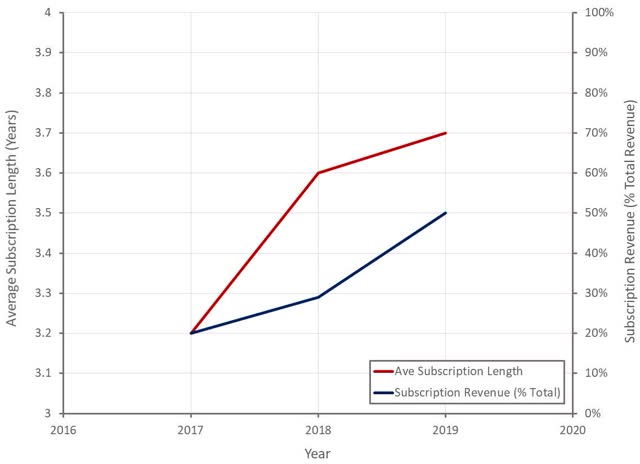 Nutanix competes with a range of companies across product categories, most of whom are significantly larger and more diversified than NTNX, making comparison difficult, although its most similar competitor is probably VMware (VMW). Nutanix’s main competitors can be broadly grouped into the follow categories:

A number of large companies are positioning themselves for success within the IaaS market through acquisitions, including Cisco acquiring HCI software company Springpath and Dell acquiring EMC which owned VMware. Nutanix believes there is a shift in focus toward running the same operating software on both public and private clouds which gives it a strong competitive position. Nutanix’s CEO has stated:

Cisco’s current offering is very far from this. They are too focused on the form factor. They and HPE and NetApp are still playing a hardware game off HCI. I think the real game that’s being played in pure software is about the entire operating system itself.

If larger players with hardware offerings are too focused on their hardware business, this may give Nutanix a significant advantage in the software side of the business. 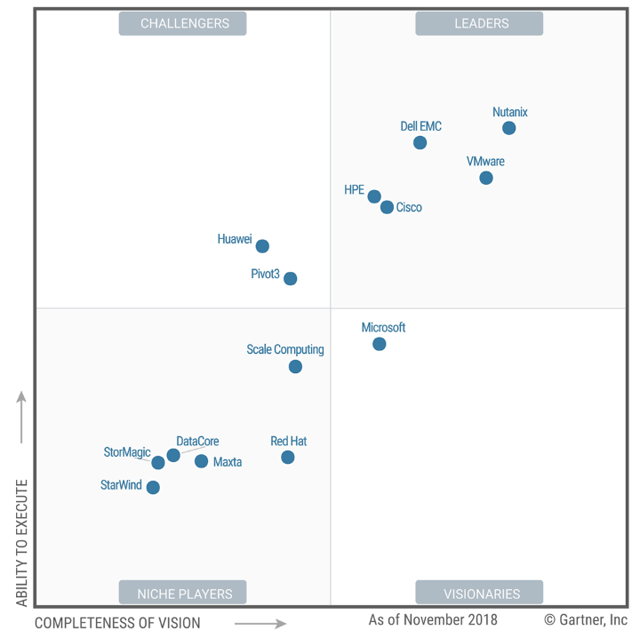 In the past, public cloud providers have typically offered homogenous infrastructure services which have not provided customers with adequate control to deliver tiered levels of application performance and availability for varying requirements. Customers have also been largely dependent on public cloud vendors to ensure data security and compliance with regulatory requirements. Most public cloud providers do not allow easy portability of applications and data to alternative providers resulting in vendor lock-in, although this is beginning to change, weakening Nutanix’s value proposition somewhat. The leaders in public cloud are Amazon (NASDAQ:AMZN), Microsoft (MSFT) and Google (NASDAQ:GOOG) (GOOG) with Amazon by far the dominant provider.

The hybrid cloud market is becoming increasingly competitive as companies like Dell, HPE, IBM, Microsoft, Amazon and Google improve their offerings through acquisitions, joint ventures and internal development. Companies that have a full stack offering may be able to create an advantage through seamless integration of services, but there is potential for best-in-breed niche software providers to be successful if they can prevent cloud lock-in and provide companies with flexibility. Closed architectures that prevent mobility of applications and adoption of new technologies across multi-hypervisor, hybrid cloud and container environments results in silos of compute that limit agility and increase costs.

Google arguably has the leading technology in this area, but lacks enterprise sensibility which has limited its success so far relative to Microsoft and Amazon. Google is using its Kubernetes container abstraction to give customers portability. Kubernetes is an open-source container cluster manager that abstracts Google’s massive infrastructure such that any Google service can instantly access all of the computing power it needs without worrying about the details. Google aims to provide a meta layer to manage infrastructure so that customers can use Google cloud or use a competitor cloud through Google software.

One of the inherent risks of Nutanix’s strategy is that the markets in which it competes are rapidly evolving and it must ensure its solutions are interoperable with the products of other vendors which generally requires other vendors to cooperate by providing early access to new products. If Nutanix is unable to obtain this access, its product development efforts could be impaired resulting in an adverse impact of the business.

Nutanix operates a high gross profit margin business, particularly now that it is abandoning its commodity hardware business. Services is becoming a more important contributor to revenue though which may pressure margins somewhat in the future as services have lower margins. 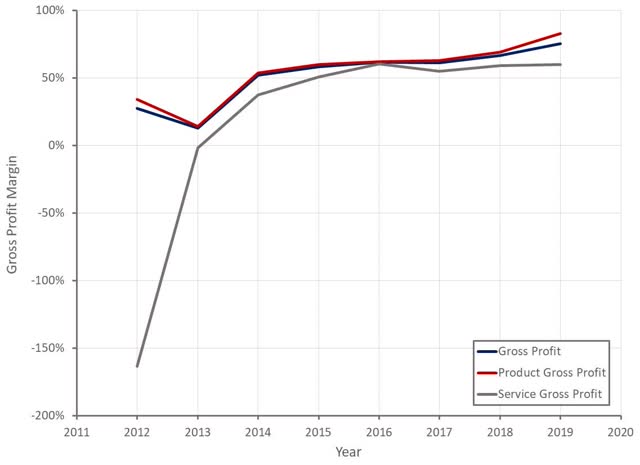 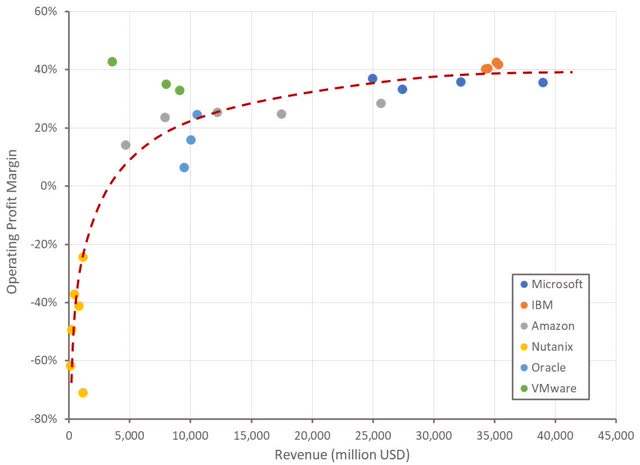 Operating losses are largely a result of high sales and marketing expenses. This is natural for a high growth subscription software business and these expenses should decline as the business scales and growth declines, particularly if customer retention rates remain high and the average length of subscriptions can continue to be extended. 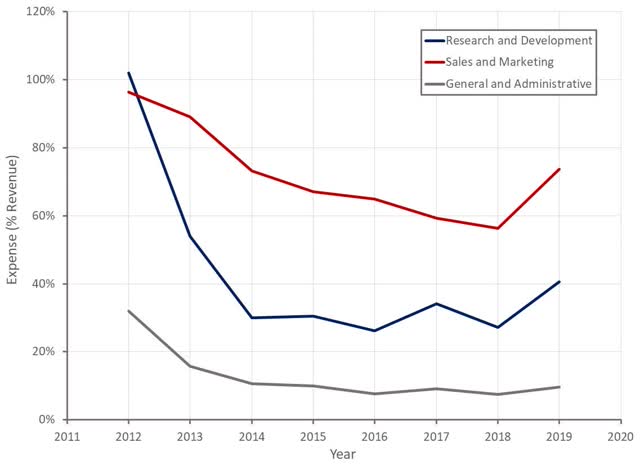 While Nutanix is yet to achieve operating profitability, it has approximately achieved breakeven on a free cash flow basis which is more significant. This is primarily a result of strong and improving operating cash flow and the low capital expenditure requirements of the business. 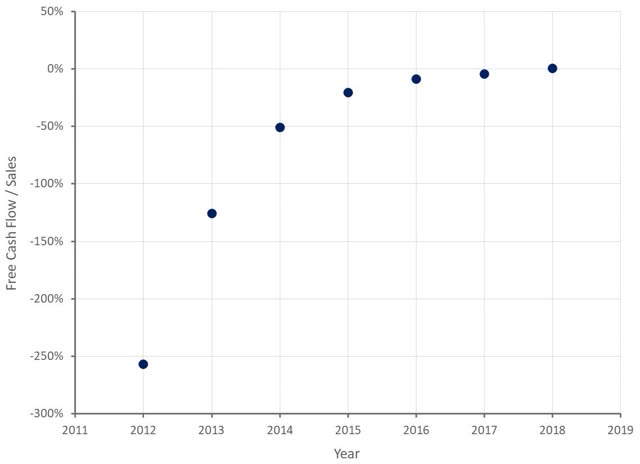 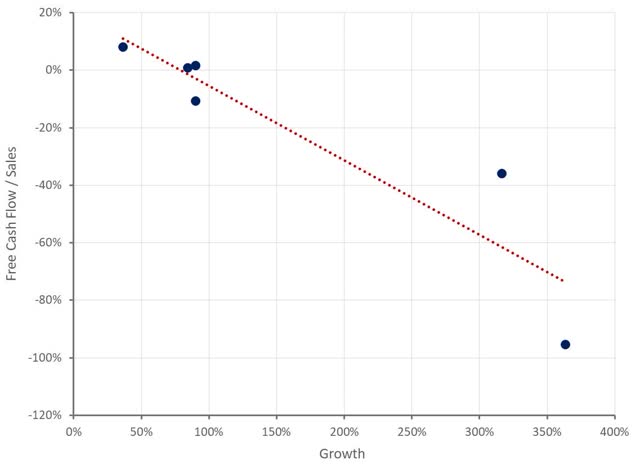 Nutanix’s revenue growth rate has declined significantly in the past few years which raises questions about the potential size of its markets. A significant portion of this deceleration in recent quarters can be explained by its shift in business model. Nutanix abandoned its hardware business in 2019, a business which contributed close to 30% of revenue in 2018. Nutanix’s shift to a recurring revenue model is also causing a greater proportion of revenue to be deferred acting as a further drag on growth. Nutanix has also mentioned that a lack of investment in sales and marketing and sales staff in recent quarters contributed to weak performance, and it is believed that the sales message became muddled when the company expanded its software offering. 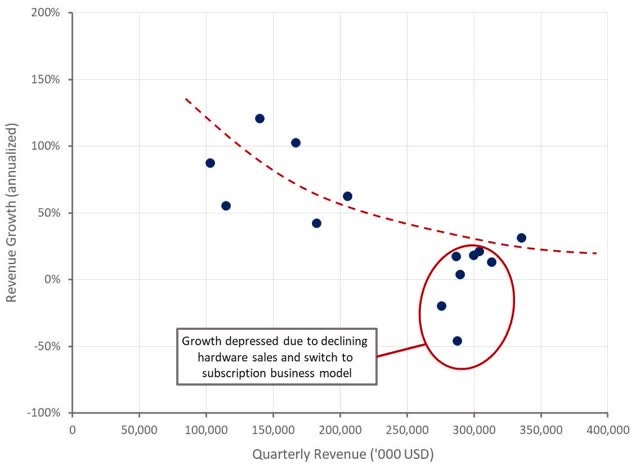 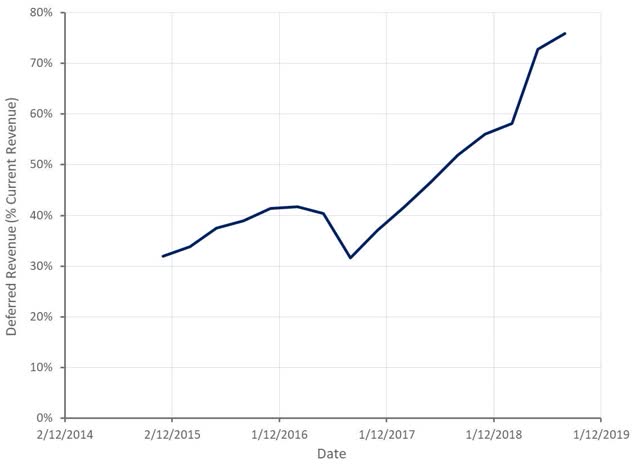 To assess the effect of Nutanix’s shift in business model, revenue indices can be constructed which removes the distorting effect of lost hardware revenue and increased deferred revenue. While actual revenue shows little growth over the last two years, revenue corrected for lost hardware sales has increased modestly and revenue corrected for hardware and deferred revenue continues to grow strongly. 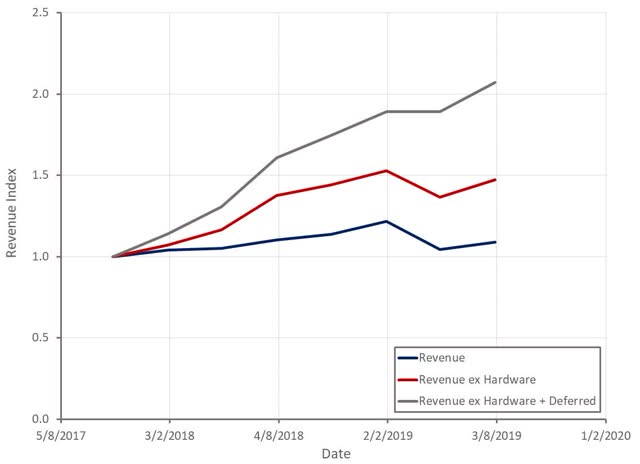 While it is unclear if Nutanix can successfully offer services across the enterprise technology stack or whether it can remain successful as a niche service provider, its current share price affords a safety margin for investors. The company’s difficulties as it has abandoned hardware, moved to a subscription business model and expanded its product and service portfolio have been overstated and data indicates that Nutanix’s core business has continued to perform relatively well during this period. Based on a discounted cash flow analysis, I believe Nutanix’s intrinsic value is approximately 40 USD per share and the company still offers investors further upside.

Disclosure: I am/we are long NTNX. I wrote this article myself, and it expresses my own opinions. I am not receiving compensation for it (other than from Seeking Alpha). I have no business relationship with any company whose stock is mentioned in this article.