It’s been a rough few months for the Gold Juniors Index (GDXJ) as weaker metals prices (GLD) have led to relentless selling in the sector, with many names down considerably from their highs. Novo Resources (OTCQX:NSRPF) is one of the names that’s been hit hard during the correction, with the stock down nearly 25% from its August highs. While the stock has undoubtedly transformed itself from explorer to potential near-term producer with a transformative acquisition, the stock remains very expensive relative to peers, trading at a massive premium to both high-grade explorers and near-term producers in Australia. Based on a Novo’s lofty valuation relative to peers of over US$500.00/oz, I see the stock as an Avoid. All figures are in US dollars unless otherwise noted.

Novo Resources has had a busy year thus far between buying a stake in Kalamazoo Resources (OTCPK:KAMRF) (KZR.ASX), acquiring a stake in New Found Gold (OTCPK:NFGFF), and finally acquiring the Mt. Elsie Project in Western Australia. However, while these were all wise moves, they didn’t put the company any closer to producing gold, which has been the plan since Novo began its exploration years ago in Western Australia. Fortunately, for investors, we finally got some news that has shone some light at the end of the production tunnel. This was the announcement that Novo made a transformative acquisition in early August by acquiring a processing facility, camp, and tailings storage facility roughly 15 kilometers from its Beatons Creek Project. 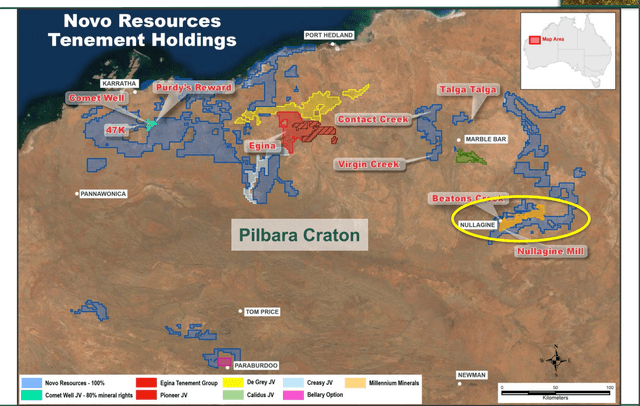 While the deal came at a hefty cost of $44 million in Novo shares, debt repayment from existing secured debt held by Millennium and a 2% fee on future gold production to IMC on the first 600,000 ounces of gold production or $14 million, this is a big deal for Novo. This is because Novo estimates that it can begin mining in Q1 of next year after facility refurbishment and could produce its first gold in FY2021. If the company is successful in these projections, this would be a very bullish development because Novo could begin using cash flow from operations to fund exploration and development work at its other projects vs. continuous share dilution. As those following Novo the past few years know, the company has diluted quite heavily, with the share count growing by roughly 200% in just three years (77~ million shares to 232~ million shares).

As the image below shows, Novo acquired a 230-room camp at the Nullagine Facility in the deal, administrative buildings, a power station, a tailings storage facility, and a gravity-CIL plant that’s capable of processing up to 1.90 million tonnes per annum based on previous operations. Between 2012 and 2019, the assets produced over 500,000 ounces of gold before being placed on care and maintenance in 2019. Therefore, this is a very impressive acquisition for Novo. This is because the only real work that needs to be done to move into production is plant refurbishment, grade-control drilling, plant commissioning, and the recruitment of a capable workforce. The company can fund this work through the financing completed concurrent with the deal and a credit facility obtained from Sprott Private Resource Lending. Currently, the credit facility is in place for $60 million, with $25 million contingent on delivering a pre-feasibility study at Beaton’s Creek that is acceptable to Sprott.

Some investors are likely applauding this recent news, believing that this has turned Novo into a mid-tier gold producer almost overnight. However, it’s crucial to assess the risks here. The first risk is that we do not have a Feasibility Study in place yet, so any discussion of future production is preliminary as no economic study complete to date has outlined how an operation will look. Obviously, trucking costs will be very low given the proximity of Beaton’s Creek to the mill. Still, a Pre-Feasibility Study is the bare minimum one should be looking for before getting excited about producer status.

The second risk is that 49% of Beaton’s Creek’s current resource is inferred, which is the lowest-confidence category for gold resources. While this doesn’t mean that the company can’t eventually convert this to indicated resources or reserves, it’s difficult to rely on these resources for mining at this stage. Therefore, what is available for mining with reasonable confidence is the remaining 457,000-ounce indicated resource at 2.1 grams per tonne gold. As shown, the inferred resource is much higher-grade (3.2 grams per tonne gold) than the indicated resource, so it would be ideal if Novo could convert these resources as they’ll yield much higher production from this higher-grade ore.

Typically, the transition from explorer to producer is the period of extreme value creation for shareholders, as we saw with Pure Gold Mining (OTCPK:LRTNF), with many explorers more than doubling in value as they’re re-rated due to this transformation. However, while the prospects of this re-rating might be exciting some investors, it’s important to note that most explorers enter this re-rating period at a valuation of less than $300 million and grow to a valuation of closer to $750 million at the first gold pour. 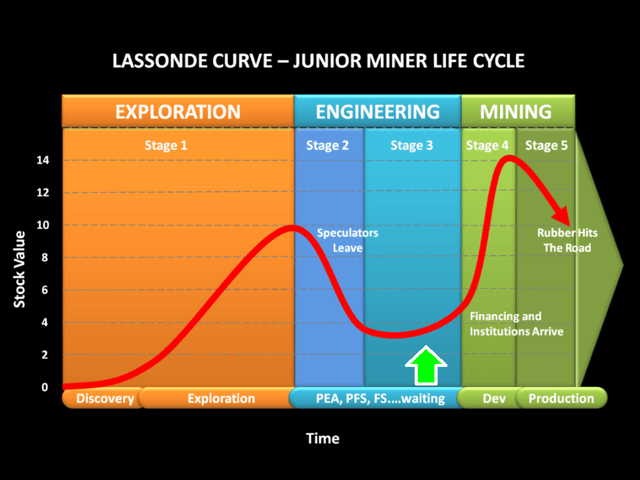 In Novo’s case, the company is already priced like a small gold producer with 232 million shares outstanding, a share price of US$2.55, and a market cap of $592 million. This is especially true if we consider that the company has a smaller resource than most near-term gold producers and explorers, with just 903,000 ounces at an average grade of 2.46 grams per tonne gold. Based on the current market cap and assuming a cash balance of $50 million at year-end, if we assume the Blue Spec deal closes, this places Novo at a valuation of $598.49/oz. Therefore, I would argue that there’s much less room for re-rating, even if the company is transforming from explorer to producer. I have arrived at this calculation by subtracting $35 million from the $592 million market cap and dividing $557 million by the current resource of 903,000 ounces.

Let’s take a look at how Novo stacks up to its peers with undeveloped gold projects in Australia below:

Beginning with the first chart, we can see that the average Australian gold explorer is valued at $44.00~/oz, and there are only four explorers valued above $150.00/oz currently. These three companies are De Grey Mining (OTCPK:DGMLF) (DEG.ASX), Bellevue Gold (OTCPK:BELGF), and Capricorn Metals (CMM.ASX). These are all stand-out companies as Capricorn is less than eight months away from its first gold pour, Bellevue Gold has a multi-million-ounce high-grade resource, and De Grey Mining has what looks like 5-million ounce resource potential at its Hemi discovery in Pilbara. However, Novo is currently trading at nearly double the valuation of two of these names and even above the valuation of De Grey Mining as a sub-1-million ounce resource explorer. I would argue that Beaton’s Creek ounces are worth at least $175.00/oz if the company can head into production successfully, but these ounces are currently valued at twice the price ($598.49/oz).

If we look at the second scatter plot above, which compares resource grade and enterprise value per ounce, we can see that Novo is yet again a massive outlier. The two highest grade companies in the list are Bellevue Gold and Musgrave Minerals (OTCPK:MGVMF), and companies with grades above 5 grams per tonne gold and near-term producers tend to receive premiums for their ounces. This explains why Musgrave Minerals, Bellevue Gold, and Capricorn Metals trade at a premium to the rest of the Australian explorers as they are either very high-grade or within a year of generating significant cash-flow.

In Novo’s case, the company is certainly not high-grade with an average resource grade of 2.46 grams per tonne gold, but it is near production if it can successfully make this transition. However, I would argue that Novo should trade at a discount to Capricorn, which is expected to be a 100,000-ounce producer at industry-leading costs, has a Feasibility Study in place, and a more clear path to production. While Novo does have a path to gold production with infrastructure, there’s less visibility into how mining might look with no economic study complete.

Finally, the last chart compares resource grade and size, and we can see that Novo actually has a resource size much smaller than the average Australian gold junior. Therefore, while Novo does deserve points for having a functional mill and a path to near-term production, it is in no way a unique project from a grade or size standpoint. In fact, the median resource size of Australian explorers is 1.78 million ounces at an average grade of 1.87 grams per tonne gold. Meanwhile, Novo’s Beatons Creek has a resource size that’s 46% below the median currently (0.93 million ounces vs. 1.78 million ounces). In summary, it’s very difficult to justify the company’s current valuation, especially when Capricorn is valued at less than $500 million as a near-term producer with a Feasibility Study in place and over 100,000 ounces of expected gold production that’s expected to begin in June of next year. 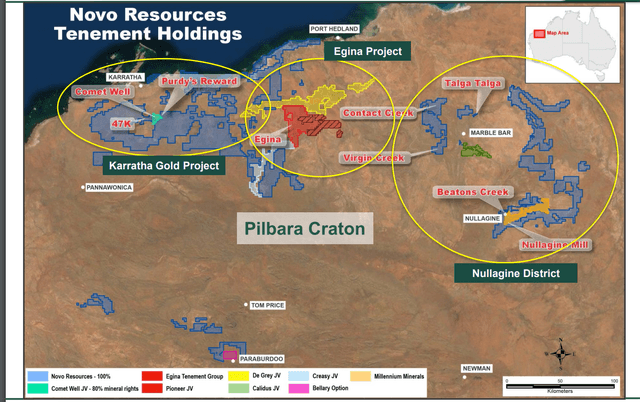 While the Novo story has undoubtedly improved with the Nullagine Processing Facility and camp acquisition, the valuation here is quite lofty, with Novo valued at above $550.00/oz currently. This doesn’t mean that the stock can’t go higher as crazier things have happened in the market like New Found Gold’s recent run-up, but I don’t see any margin of safety at US$2.55 for investors. Therefore, I believe investors would be wise to look elsewhere in the sector if they’re hunting for value in the precious metals space and not pay more than US$2.50 for Novo Resources.

If you enjoyed this article, please scroll up and click on the “Follow” button next to my name to not miss any of my future articles.