I have been dubious about Novavax since one of my very first Seeking Alpha articles in 2016, “Novavax: The Little Engine That Couldn’t”. At the time, Novavax (NVAX) was reeling from an early RSV trial failure.

In the intervening years, I have reported back periodically on Novavax. As a general rule, I have found little to celebrate about this stock. I have had it pegged as a perennial loser, and just a handful of months ago, on 5/1/20, I characterized it as an unlikely phoenix.

At the time, Novavax was trading for <$20, following a 1-for-20 reverse stock split. It currently trades for ~$100. In the recent past, the company has traded over $180. What happened? How could I get it so very wrong? My working title for this article as I drafted it was “Novavax: So Very Wrong”.

I changed it to the more decorous “Novavax: In The COVID-19 Vaccination Fast Lane” as I started to process its achievement in getting to this point. This article takes a look at the situation and evaluates how it impacts Novavax as a current investment option.

Novavax has put together an attractive COVID-19 vaccine package.

As a small company with a checkered past, Novavax had to do things right to get as far along in the cutthroat battle for a COVID-19 vaccine as it seems to have done. On the financing front, it got off to a modest start in the right direction with a $4 million Coalition for Epidemic Preparedness (CEPI) vaccine development grant announced on 3/10/20.

At the time, the project was in the early stages with plans to expedite its development, as stated in the release:

I considered its prospects for moving from “… multiple recombinant nanoparticle vaccine candidates in animal models…” to clinical trials uncompelling.

Novavax issued a press release a few months later, in May 2020, which had an entirely different tenor. The company’s 5/11/20 release announced that its little $4 million grant had increased nearly a hundred-fold, morphing into a gigantic $388 million grant, CEPI’s single-largest investment to that point.

When it rains, it pours, or so the saying goes. Novavax’s $4 million March CEPI grant was dwarfed by the $384 million successor in May; then a scant few months on this was further dwarfed by an Operation Warp Speed (OWS) grant of $1.6 billion. On 7/7/20, the company announced:

Under the terms of the agreement, Novavax will demonstrate it can rapidly stand up large-scale manufacturing and transition into ongoing production, including the capability to stockpile and distribute large quantities of NVX-CoV2373 when needed. The agreement will fund the late-stage clinical studies necessary to determine the safety and efficacy of NVX-CoV2373, including a pivotal Phase 3 clinical trial with up to 30,000 subjects beginning in the fall of 2020.

While its CEPI and OWS grants were the largest, they were not Novavax’s only COVID-19 support received during this period. It was also awarded a $60 million contract by the Department of Defense to:

… work with a U.S.-based biologics contract development manufacturing organization (CDMO) to manufacture the antigen component of NVX-CoV2373 for at least 10 million doses of vaccine. Novavax will also collaborate with U.S.-based CDMOs to scale up production and manufacture of the Matrix-M adjuvant component of the vaccine.

Later during the summer, Novavax worked international deals (p. 20); one was with Takeda Pharmaceutical Company Limited (TAK) to assure availability of its vaccine in Japan; another was with the Serum Institute of India Private Limited for India and sundry other less-developed countries.

Novavax is progressing its vaccine candidate through its clinical trial phases

The company is running its COVID-19 vaccine candidate through its standard clinical paces. Its first ClinicalTrials.gov trial, NCT04368988, has a study start date of 5/25/20. Its brief summary describes it as:

Novavax is the study sponsor with CEPI as collaborator. On 8/4/20, the company announced positive data from the phase 1 portion of the trial. It released a 16 slide presentation with the trial results; slide 15 provided the following synopsis:

Novavax wasted no time in moving to the next step, per its 8/24/20 announcement below:

Novavax began a separate phase 2b trial of NVX-CoV2373 last week in South Africa to assess its efficacy in 2,665 healthy patients, as well as its safety and immunogenicity in 240 HIV-positive adults (DID, Aug. 18).

Subsequently, on 9/2/20, Novavax announced publication of the results from the phase 1 portion of its trial in the New England Journal of Medicine; the article is available here.

The ranks of Covid-19 vaccines in the home stretch of clinical trials now include Novavax. On Thursday, the company (ticker: NVAX) said it will start a Phase 3 trial of its vaccine among 10,000 volunteers in the U.K. A pivotal trial in 30,000 people could begin next month in the U.S., if regulators are satisfied with the safety showing of a Phase 2 now under way here.

It’s likely that an American study will get a green light from the U.S. Food and Drug Administration. Data published on Novavax’s Phase 1 trial showed reassuring tolerability and signs of strong effectiveness.

The company published a 9/24/20 release outlining details on the trial. It noted that at least 25% of trial patients will be over age 65; it will also prioritize racial and ethnic minorities most affected by COVID-19. The company further noted:

Novavax’s grants substantially reduce the risk for its COVID-19 vaccine, however, it remains an uncertain project

Novavax published a 30-slide “Corporate Overview and Investor Deck” on 10/5/20. As part of this presentation, the company included the following slide 23 summarizing its COVID-19 vaccination achievements to date: 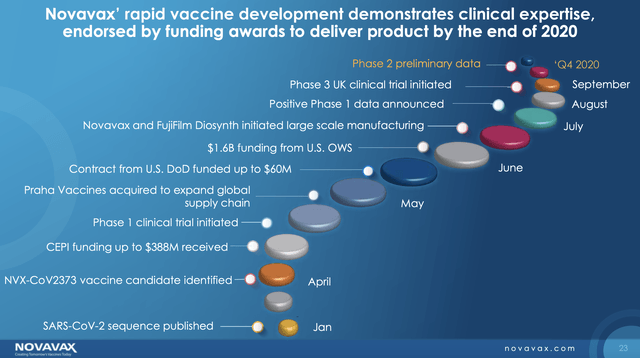 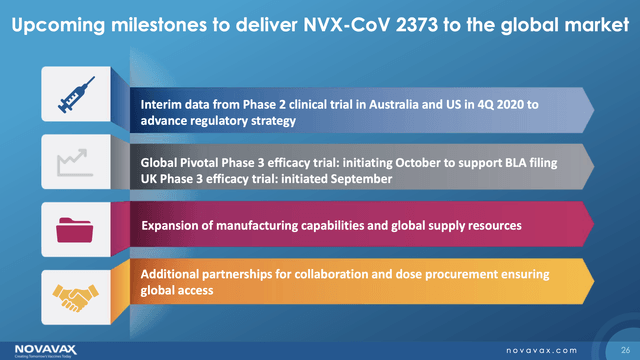 As CEPI noted in its latest COVID-19 news release below (excerpted 10/5/20), there is considerable variation in reports of trial results:

There’s promising data emerging from COVID-19 vaccine trials, but we aren’t able to directly compare results. Why is this?

As we have seen with the publication of Phase I trial results from CEPI’s COVID-19 vaccine development partners, University of Oxford, Novavax, and Moderna, among others, encouraging data is now emerging on multiple COVID-19 vaccine candidates.

While we should all recognise that there is still a long way to go in terms of vaccine development, this is positive news. However, we currently can’t directly compare results and select the most promising vaccine candidates as different laboratories are using different measurements to test if the immune response (e.g., the production of antibodies and/or T-cells) is induced in response to a vaccine dose.

The bottom line is that Novavax has offloaded much, if not all, of the financial risk associated with its COVID-19 vaccination project. In order for it to succeed financially, the company’s vaccine must, at the very least, meet the minimum standard in the OWS grant (p. 19):

… produce beneficial results commensurate with the expenditure of resources and that termination would be in the U.S. Government’s interest…

NanoFlu and RSV vaccine revenues are delayed into future years

In my article “Novavax: An Unlikely Phoenix”, I had a bearish outlook for the company, which carried a ~$1 billion market cap at the time. As I write on 10/7/20, it carries a market cap of ~$5.5 billion. Apparently, sell-side analysts are raising their Novavax price targets based on the strength of its COVID-19 vaccine candidate, NVX-CoV2373.

I do not share this view. I have upped my outlook from bearish to neutral, reflecting my acknowledgement of the financial support the company has received for this as-yet-unapproved vaccine to date. Even if I were to assume that the vaccine gets approved, it is still unsure as to whether and the extent to which Novavax will benefit from such approval.

In all likelihood, COVID-19 vaccines will be playing in a crowded field. While not all the potential competitors who are already in phase 3 trials in the US are well-funded Big Pharma names, several are. The pricing of any vaccine will be a political hot potato.

Novavax has long been remarkably effective at raking in big dollar grants. To this point, that has not translated into product sales which would support a bullish prognosis for the company.

Aside from its COVID-19 vaccine, Novavax has other late-stage vaccine projects in its pipeline. Consider slide 4 below from its most recent slide deck: 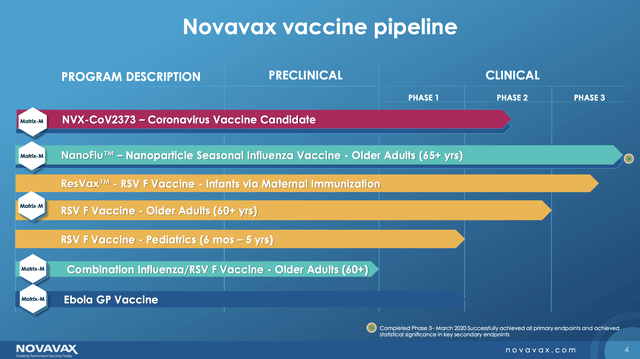 In addition to its COVID-19 vaccine, the company has its NanoFlu and several RSV vaccine products as its late-stage products. Although Novavax’s NanoFlu phase 3 was successful, it has not paved the way to a rapid regulatory filing.

According to CFO and CBO John Trizzino at the recent Morgan Stanley conference, the NanoFlu BLA will likely not get filed until the end of 2021. This puts any approval off to 2022 and revenues into 2023.

As for its RSV vaccines, these do not appear to be likely to provide near-term product revenues. Novavax barely mentions them in recent transcripts available on Seeking Alpha. The following discussion from the company’s Q1 2020 earnings call provides the only detail I was able to find:

While not meeting the pre-specified primary endpoints for the Phase 3 trials, we observed that the vaccine had significant effects on hospitalization and pneumonia the volume in both trials, which provides critical insights on the continued need for RSV vaccine.

Based on the foregoing, I do not consider RSV as being a value driver for Novavax at the current time.

COVID-19 is providing Novavax lush grants and prospects as described. However, it also seems to be interfering with its former standbys, its NanoFlu and RSV vaccines. Certainly, the market seems to like its prospects, pushing the company’s market cap to $5.5 billion.

Perhaps it will reap COVID-19 product revenues that will support this market cap. Though that is not my expectation.