Does anyone remember the petroyuan? It doesn’t appear so, though not because the thing disappeared rather due to the fact that it didn’t. It was a really big deal for a time, pretty much all of 2018. What it was supposed to have represented was the dollar’s death knell. Guaranteed, one hundred, no, one thousand percent dead. This was widely reported more than a few times as fact, a perfectly frenetic parallel to the related inflation hysteria then raging.

Right from the start of 2018, we were told we had better begin preparing for a new global reserve currency. All hail the Chinese!

That’s what global reserve means, right? According to this mainstream convention, it’s all about oil. Petrodollar is the major thing about the dollar, they say, so petroyuan quite clearly had spelled the end of that thing. The dollar was toast. Once China took over oil, as they were doing, there’d be nothing left for the reserve dollar.

The establishment of renminbi-based oil trading at a time when China and many other economies confront aggressive US tariffs, and possible further development of yuan-based trade in other commodity markets, suggests that the US dollar could face an unprecedented challenge to its hegemony.

Blah, blah, blah. How many times do we have to go through this?

What’s actually clear is that very few seem to understand the nature of a global reserve currency. This is understandable, at least, given how corrupt Economics has become and how for decades little to no attention was paid to the monetary system. One massive consequence, other than GFCs, is the public has been left ignorant about this critically important subject. Not just the public, either.

Near two and a half years after the launch, the global situation is nothing like what they said it would be. The petroyuan continues to trade with serious volume in Shanghai. And the dollar has been completely undisturbed by it.

Quite interestingly, just when RMB-for-oil system went online in late March 2018 supposedly making the dollar’s crash all-but-inevitable, that’s right when the dollar instead began to rise even higher. There’s a very valuable lesson in there somewhere, not that anyone appears to have learned what it is. 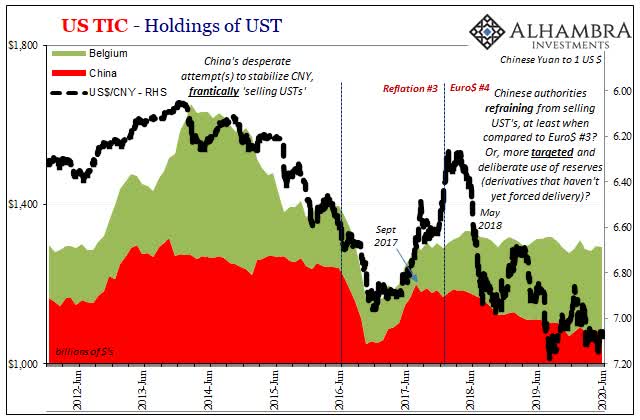 An example from just yesterday:

Six months ago, exchange rates would have mattered less in a global investor’s stock-picking process. Now with the dollar facing what some warn is an existential threat, currencies are in the limelight.

With over 40% of non-U.S. firms’ sales exposed to the world’s reserve currency, according to data from Jefferies Financial Group Inc., everyone is trying to map how a tumbling dollar re-shapes investment across equities.

Thank you, petroyuan, for once more demonstrating that fact.

For something to legitimately challenge the (euro)dollar, it will take depth, sophistication, serious logistics, and most of all broad participation; Shanghai oil contracts are a miniscule drop in an enormous (leaking) bucket.

Hell, not even the Chinese believe they’re going to take down the dollar; they long ago stopped trying. As I write for my RCM column to be published tomorrow:

Right from the start, China’s currency isn’t fully convertible in the most comprehensive sense, which means that once you have RMB in your hands you don’t actually have RMB in your hands. The Chinese government is notoriously inviting for those who want to move cash or product in, but equally if not more stringent for anyone even thinking about taking cash out.

RMB is therefore of limited use, a fact of monetary life China isn’t going to change anytime soon (they certainly haven’t yet). Which, if you understand the nature of global reserve currencies, would definitively rule out RMB as one even if the PBOC’s involuntarily ultra-tight grip on supply hadn’t already done so a long time before.

That’s the other far more important part of all this – as I keep pointing out. China’s central bank balance sheet patently disarms every idea about the dollar crashing. Let’s take another look, here using the latest updated figures for the month of July 2020: 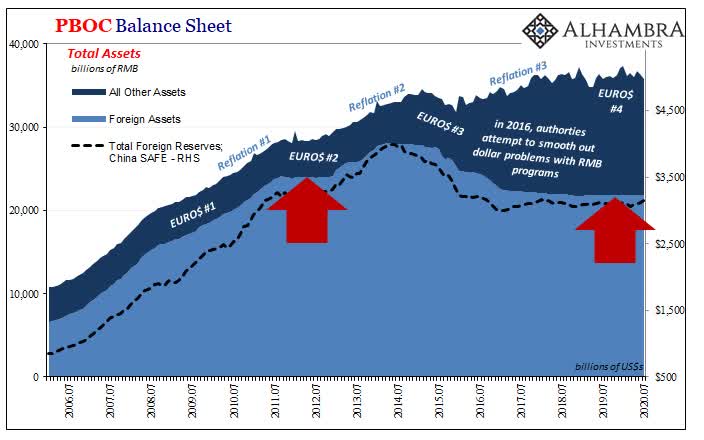 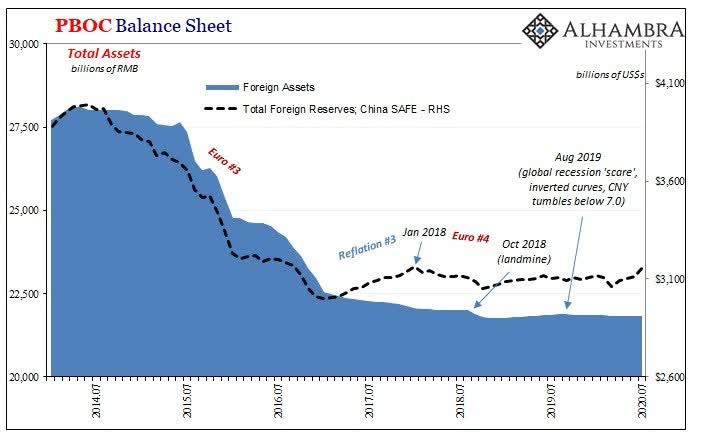 I showed last month how June’s balance for forex assets had so minimally changed that there’s no way it could have been natural. And if it wasn’t natural, then China is still experiencing dollar issues. July wasn’t that obvious, but still obvious nonetheless.

Not only that, look at how the changes have evolved in the engineering and how these things have lined right up with the broader eurodollar developments. Right when the petroyuan began trading in March 2018 already the dollar crash story was falling apart underneath it – as you could’ve observed in things like fed funds, repo, and the situation in China’s forex stash.

The details are insanely complex and often highly confusing, but in the big picture sense, it’s really simple. Scarcity. I wrote a few days ago:

The dollar has barely budged against the monetary systems who are most vulnerable to the lack of “money printing”…Let’s be simple and direct – a real falling dollar, like that which existed prior to 2008 and then again briefly in specific cases (such as EM’s) between 2009 and Euro$ #2 in 2011 would see eurodollars (bank liabilities) flowing back into China; they aren’t. If Jay Powell was flooding the world with liquidity, they’d show up there, too. They aren’t, either.

In other words, “dollars” remain scarce across the world months past March 2020. And with RMB nowhere near satisfying a single one of the major conditions to replace this current arrangement, and Chinese authorities not even trying, even as the current arrangement malfunctions over and over and over again, what’s going to drive the dollar down? No, I mean really drive the dollar down, not the usual repetitive political story like the one they used to tell about the petroyuan. 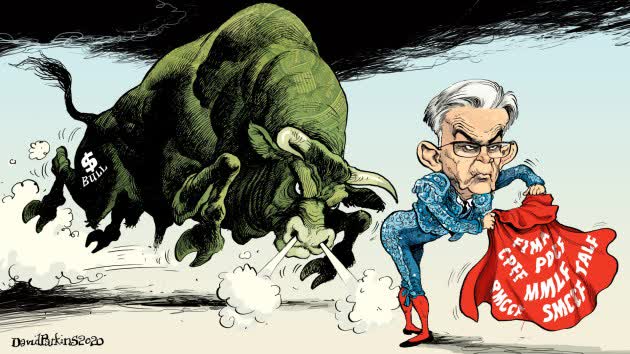 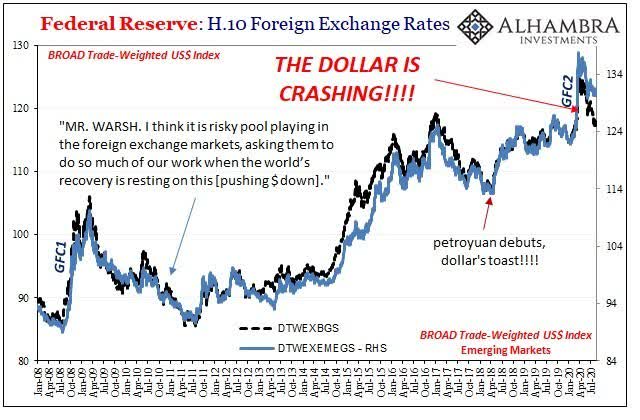 The only other thing would be Jay Powell’s “money printing” which is equally disproved by these same China actions (in continuing opposition to mainstream media words); as well as the mountain of market evidence, including, you know, where the dollar actually is right now even when including the euro.

The petroyuan actually was a huge deal but not because it was ever a serious challenge to destroy the dollar; quite the contrary. Ironically, to its headline-grabbing 2018 proponents, anyway, its very existence is another significant factor in the long-term dollar “bull” landscape. The Chinese are showing you that they (still) can’t get the dollars they need no matter how many bank reserves the Fed creates, while also demonstrating that there’s no way to get around that need and the banking system which steadfastly refuses to fill it.

In fact, because this thing keeps malfunctioning and nothing has yet overtaken it after thirteen years, eleven of them with China reportedly on the cusp of finishing the dollar off, it’s a big indication that in the real world which exists way outside the financial media’s conception, the dollar is not going anywhere.

Except, of course, further up.