A perfect quarter to look at the absurdity of reporting “annual rates” in the headlines.

This morning, we were confronted with horrible news, which we’ve been expecting all along, but this news, though truly horrible, was also a result of something called “annual rate.” What we saw in the headlines was that GDP, adjusted for inflation, collapsed by “32.9%” in Q2.

That should have been reported as “32.9% Annualized.” It was an “annual rate,” meaning that the Q2 drop was essentially multiplied by 4 (with adjustments) to obtain a theoretical figure that shows what GDP for the whole year would look like if it kept plunging like this for four quarters in a row. But that is unlikely. The Bureau of Economic Analysis, which reported this GDP data this morning, also reports – deeper down in its data – “not annualized” figures. And not annualized, GDP fell 9.5% from Q1:

This 9.5% plunge in Q2 from Q1 was still the steepest decline in nearly 70 years of quarterly data, which began in 1947. There was no quarterly data during the Great Depression, only annual data. But for the whole year of 1932, GDP plunged 12.9%, sandwiched between several years in a row of steep annual declines, and the total decline over those years was terrible. So, we’re not there yet. 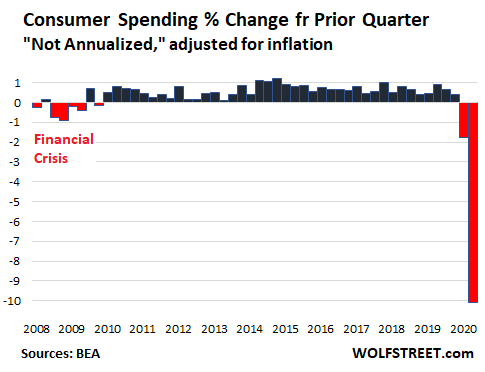 Consumer spending accounted for 67% of GDP in Q2. And that 10.2% quarter-over-quarter drop – as well as 10.7% year-over-year drop – was gigantic as far as drops in consumer spending is concerned. But it was propped up by stimulus payments and unemployment payments, including the $600 a week in federal unemployment supplements, and people did spend this money.

The decline in consumer spending was driven by spending on services, which plunged 14.7% year over year, including a full-blown collapse in spending on travel, hotels, food services, and personal care such as hair salons.

Goods sales fell only 1.8% year over year, as grocery sales surged because people switched to eating at home.

State and local government spending ticked down 0.7% year over year. These governments are grappling with a historic plunge in revenues and are trying to figure out how to get through this. But they too are benefiting from federal government support. Without it, the drops would have been steeper.

“Annualized rates” are misleading and should be banned from headlines

The US is one of the few countries in the world to report GDP data in the headlines on an “annualized” basis. It’s more exciting because it increases the figures.

In Europe or in Japan, you might read that during a good quarter, the economy rose 0.5%, and that sounds pretty puny, and it’s hard to construct compelling headlines out something this small. In the US, given the same growth, you’d read that the economy grew 2.0%, which sounds a lot better, but is the same thing.

I implore the government entities that decide this to start the process of switching it around: Report at the top of the data release the “not annualized” figures, and deep down, hidden in the tables and details, have a column for annualized figures, for those that want them.

And keep the rest of the people – who have better things to do than digging through 20 pages of GDP data on a Thursday morning – properly informed.