All three major US indices closed broadly lower as rising coronavirus cases across the country threatened further lockdowns. New York City decided to shut schools as the Covid infection rates surpassed a critical threshold. The 7-day average for new cases in the US hit 150,000, while the total death toll reached 250,000. The worrisome picture overshadowed positive news from Pfizer, which said its vaccine has reached a safety milestone with a 95% effective rate in a final clinical trial. The company is preparing to seek emergency-use authorization from regulators, paving way for an initial use as early as December.

Asia-Pacific markets look set to follow a bearish US lead, with equity futures pointing to a lower start in Japan, Australia, South Korea, India and Singapore.

On a separate note, crude oil prices were underpinned by a smaller-than-expected increase in US inventories, according to data released by the US Energy Information Administration (EIA) overnight. US crude stockpiles rose by 0.768 million barrels in the week ending November 13th, compared to a 1.65 million forecast. WTI is trading at around US$ 41.80, attempting to challenge a key resistance level at US$ 42.00.

On the macro front, ECB President Lagarde will give a speech at 08:00 GMT today, which will be closely watched by currency traders. US initial jobless claims and existing home sale figures are also among the top events later. Find out more on the DailyFX economic calendar.

The Singaporean stock market saw a significant institutional money inflow in early November, with S$299 million and S$564 million pumping into local stocks during the first two weeks respectively (chart below). Fund managers’ top picks include banks, aviation, food & beverages and real estate stocks. This reflects a pickup in risk appetite from institutional investors, who might have started a new round of bargain hunting after months’ of net selling. A string of positive vaccine news also lifted investor confidence. 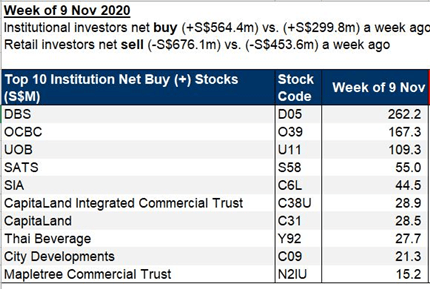 Technically, the STI appeared to be temporarily overbought, and thus may be vulnerable to a technical pullback below a key resistance level at 2,800. The overall trend remains bullish-biased, albeit a short-term correction is possible. An immediate support level can be found at 2,703 – the 23.6% Fibonacci retracement.

Technically, the Nikkei 225 index broke above the “Ascending Wedge” that it formed since early June, propelled by strong upward momentum. The index hit a multi-year high of 26,200 before entering into a brief consolidation. The Bollinger Band width has widened significantly, suggesting strong upward momentum. An immediate support level can be found at 25,470 – the 23.6% Fibonacci retracement.

What is the road ahead for equities this quarter?

Technically, the ASX 200 index looks set to recede after hitting an eight-month high of 6,550. The overall trend remains bullish-biased, albeit a technical correction is possible. Holding above a key support level at 6,500 may pave way for further upside potential with an eye on 6,600. An immediate support level can be found at 6,400.