After New Gold (NGD) released its Q4 2019 financial results and its updated life of mine plans for the Rainy River and New Afton mines, along with the 2020 production and cost guidance, its share price declined by 10%. The decline was caused especially by the high projected 2020 AISC. On the other hand, the updated life of mine plans show that New Gold hides a lot of value. But it will take some time to unlock it.

Due to the lower production volumes and higher sustaining CAPEX expenditures, the Q4 AISC increased to $1,862/toz gold, which is a new negative record. The Q4 2019 AISC was even by more than 100% higher than in Q4 2018. The good news is that the total cash cost was $942/toz of gold equivalent. After the CAPEX expenditures return back down, the AISC will decline as well. However, it won’t be easy to push it below the $1,000/toz level, which was New Gold’s plan declared only several quarters ago and reiterated in the updated life of mine plan.

Overall, New Gold’s 2019 production guidance was met. Moreover, the AISC was even lower than projected by the lower boundary of the cost guidance. The guidance envisioned AISC of $1,330-1,430/toz gold; however, the actual 2019 AISC was $1,310/toz.

The low production volumes were reflected also by low revenues that amounted to only $139.2 million in Q4. It means a 17% decline compared to Q3. Also, the operating cash flow was negatively impacted and it declined to $47.9 million which is the worst result recorded over the last two years. A positive feature of the Q4 financial results is the fact that New Gold was finally able to break a long streak of negative quarterly net incomes. Over the previous quarters, the income was affected by various impairment charges. But in Q4, it climbed to $300,000. It is not a big number, but it is a positive number. Despite it, the Q4 EPS equals approximately $0. 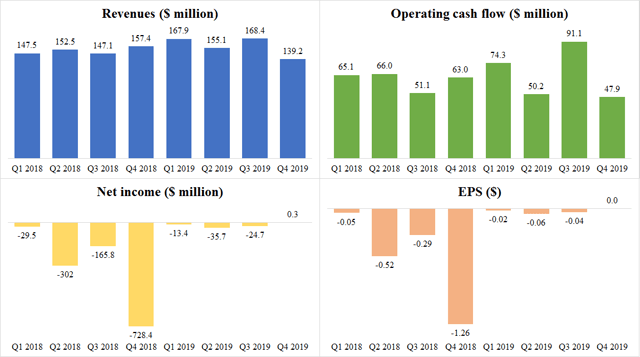 New Gold’s cash position has worsened significantly. The volume of cash, cash equivalents, and short-term investments declined from $178.8 million as of the end of Q3, to $83.4 million as of the end of Q4. The decline was attributable to the accelerated CAPEX spending, as well as to debt repayment. The volume of total debt declined to $714.5 million, or by 6.1% quarter-over-quarter. On the other hand, the net debt increased by 8.4%, to $631.1 million, as the volume of cash on hand declined more than the volume of total debt.

As the weak Q4 numbers were expected, there are other factors behind the negative market reaction that pushed New Gold’s share price to its lowest levels since July. 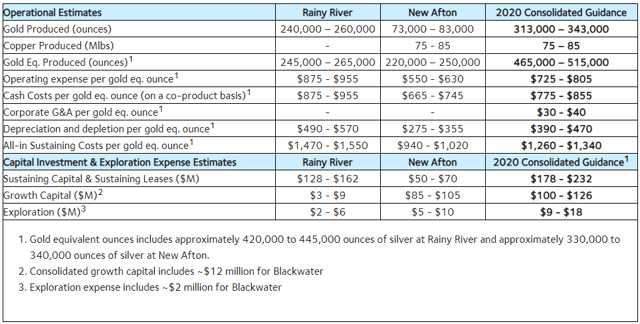 The life of mine plans look good and they don’t explain the 10% share price decline that followed after the news release. The problem is the 2020 production and cost guidance. New Gold should produce 313,000-343,000 toz gold and 75-85 million lb copper. It equals to 465,000-515,000 toz of gold equivalent. It means that the projected production volumes are good. The problem is the AISC. It was originally expected that after the increased 2019 sustaining CAPEX expenditures that pushed the AISC up to $1,310/toz of gold equivalent, the AISC should decline notably in 2020. However, as New Gold moved Rainy River-related expenses worth approximately $40 million from 2019 to 2020, and at New Afton sustaining CAPEX should almost double compared to 2019, New Gold estimates its 2020 AISC to be $1,260-1,340/toz of gold equivalent. Adding to it the negative impacts of the gold hedging (in H1 2020 – 72,000 toz gold capped at $1,355/toz, and in H2 2020 – 96,000 toz gold capped at $1,415/toz) and New Gold probably won’t be able to generate a meaningful volume of free cash flow this year. The good news is that New Gold’s notes mature only in 2022 and 2025. If New Gold shows strong performance in 2021, the refinancing shouldn’t be a major problem. 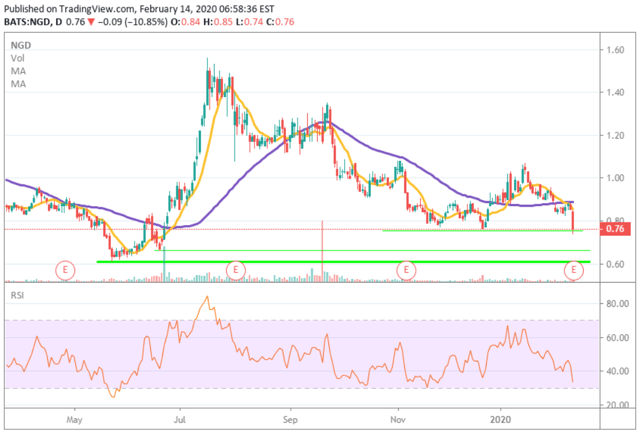 New Gold’s shares have been in a downtrend since the announcement of the Q4 operational results, back in the middle of January. The share price slowly declined below the 10-day as well as the 50-day moving average, moreover, the quicker moving average crossed the slower one to the downside, further boosting the negative sentiment. The decline culminated by a 10% drop on the day when the Q4 financial results, the 2020 production and cost guidance, and the Rainy River and New Afton life of mine plans were released. However, the RSI still hasn’t reached the oversold levels which indicates that further downside is possible in the near term. Moreover, the share price shortly dipped below the support level at $0.76. Another support stands at $0.66 and then at $0.6. It is hard to say which one of these supports will hold. But after the bottom is reached, New Gold will become an attractive investment for the short-term speculators that will try to ride the stock several tens of percent higher, as well as for the long-term investors.

Disclosure: I am/we are long NGD. I wrote this article myself, and it expresses my own opinions. I am not receiving compensation for it (other than from Seeking Alpha). I have no business relationship with any company whose stock is mentioned in this article.

© Reuters. WASHINGTON (Reuters) – The U.S. State Department has approved the potential sale of drones to Qatar in a deal valued at $1 billion, the Pentagon said on Tuesday. The principal contractors will be […]