2020 is set to be another record year for Netflix (NASDAQ:NFLX). After adding an impressive 26 million subscribers in the first half, it is very close to reaching a total of 200 million subscribers, well ahead of any of its competitors.

The bull thesis for Netflix is pretty clear. Invest as much as possible in content, which will attract new subscribers, which will allow them to spend more on content and raise prices as their value proposition improves.

Netflix is now closer than ever to outspending its competitors, and, as the streaming war heats up, Netflix will need as much cash as it can get to continue its growth. (Netflix actually spent $14 billion on content in 2019, but since it amortizes content costs, the income statement expense is lower) 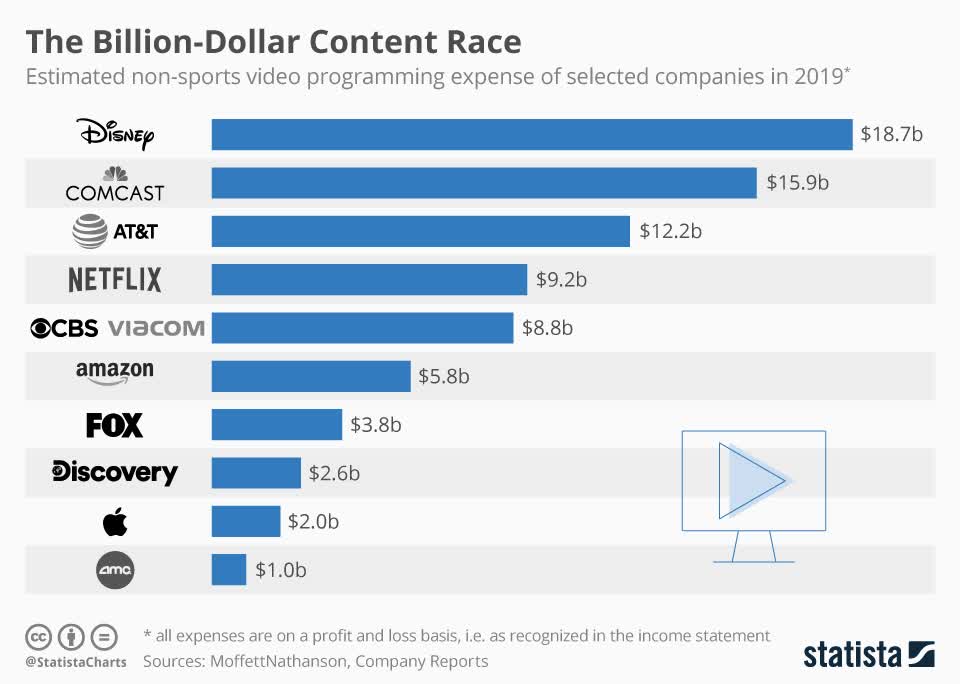 The thing is, Netflix is still losing money. Although operating income has been positive for a couple of years due to its content amortization, Netflix is spending more on content than what they show in their income statements.

Therefore, the first piece of the puzzle we need to find to value Netflix is:

How much is Netflix going to spend on content?

First, we need to find out how much Netflix is actually spending on content, and how much it can spend in % of revenues. To do that, we just need to look at Netflix’s income and cash flow statement:

One could say that the current content spending of ~$15 billion is enough, since Netflix has a fairly high penetration rate (paid memberships/number of households with broadband) of 60% in the United States and Canada (UCAN), and it is still growing at a decent rate internationally.

However, let’s say that for Netflix to maintain its position as the leader of streaming, not only in the US but worldwide, it needs $23 billion of content spending by 2025 to outspend the Disney + FOX (NYSE:DIS) combination. This brings us to the second question:

How many subscribers can Netflix acquire and maintain?

It seems like Netflix’s subscriber growth has stalled since 2018, seemingly being unable to breach the 30M net adds/year. Although this may be a temporary issue, it is something that we need to take into account when valuing the company. 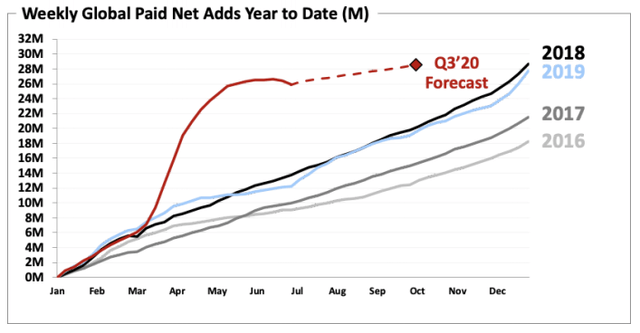 Measuring Netflix’s Total Addressable Market (TAM) is the key to valuing the company. Although we could use the 60% penetration rate achieved in the UCAN region as a way to measure the potential TAM, it may not be the most efficient or accurate way to do it.

The problem is that these new subscribers will bring the average ARPU down, as they will come from countries with a lower cost of living. This brings us to the third question:

How much can Netflix charge each subscriber?

Netflix’s price increases are here to stay. As it produces more and more content, Netflix will feel more comfortable increasing its price, especially in regions with higher penetration like UCAN and Europe.

Even though most of its future growth will come from countries with a lower cost of living, which will bring average ARPU down, Europe and UCAN are highly likely to experience price increases to offset this. In my own model to justify the current valuation, I have forecasted a yearly 3% increase in ARPU, although this may prove to be too generous in the near term.

Putting the model together

I have created a DCF model that values Netflix at its current trading price of $525 using the data that I have discussed in this article. Here is a summary of the assumptions:

The model in subscriber numbers 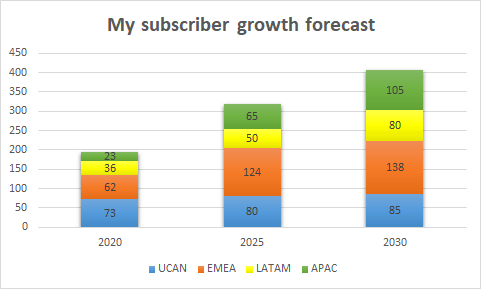 The streaming wars are heating up, and this is the biggest case promoted by bears against Netflix. I think that it is still pretty unclear if this will really be a concern for the bull case.

Disney+ and Apple (NASDAQ:AAPL) TV+ have been available for almost a year now, and Netflix has continued to grow without any setbacks. This has proven that these services are not substitutes for Netflix, but drivers of internet TV. They are actually going to help Netflix by moving consumers away from traditional TV.

However, Comcast’s (CMCSA) Peacock platform may prove to be a formidable competitor, as it will take away some of Netflix’s most popular shows such as The Office and Parks and Recreation in 2021. The impact of these shows leaving remains questionable, but it is something that we will know as soon as Netflix reports its Q1 2021 earnings.

There also may be some consumers that choose to rotate between services to watch all of the exclusive content while saving money, but this has not been a concern for Netflix’s growth story so far.

Netflix has 3 major revenue sources that can become drivers of growth if subscriber growth is lackluster:

A lot can happen in 10 years. Only time can tell how profitable this new future of TV will be, but one thing is clear, Netflix is, for now, the leader of this future.

That is why, if you are currently invested or thinking about investing in Netflix, you need to ask yourself these 3 questions:

Personally, I am still undecided on Netflix. That is why I look forward to seeing an insightful discussion in the comments. Will Netflix become the worldwide leader of TV as consumers shift to streaming or not? Feel free to share your thoughts and forecasts.