Murphy’s Law states that anything that can go wrong will go wrong. It feels like we are living in Murphy’s world these days as people all over the globe are hunkered down in their homes, fearing that Coronavirus will continue to spiral out of control. Central banks and governments are scrambling to provide monetary and fiscal stimulus to markets, individuals, and companies until scientists uncover effective treatments and a vaccine. Risk-off conditions have gripped markets across all asset classes. Meanwhile, OPEC and Russia exacerbated the problem facing markets as they decided to address demand destruction in crude oil by flooding the market with the energy commodity. Within the energy sector, the price of gasoline has suffered the worst loss. The futures price of the fuel dropped from over $1.80 per gallon to below $0.40 cents. Gasoline futures on the New York Mercantile Exchange division of the CME were trading at just over 50 cents per gallon wholesale at the end of last week. The United States Gasoline Fund (UGA) replicates the price action in the fuel futures. Low gasoline prices tend to be good news for consumers, but that is not the case in the current environment.

The lowest level in years

The price of nearby gasoline futures traded to a high of $1.8011 per gallon wholesale at the beginning of 2020. The winter months are typically a weak time of the year for gasoline demand, which weighs on the price of the fuel. In February 2018, the price of gasoline found a bottom at $1.6519, and in February 2017, the price fell to a seasonal low of $1.4650. In late February 2020, the price reached $1.3562 at the end of the month. The demand destruction on the back of Coronavirus and a flood of oil from OPEC as the cartel abandoned production quotas, sent the price to the lowest level of this century.

As the chart illustrates, the price of nearby gasoline futures fell to a low of 37.60 cents per gallon on March 23, the lowest price since 1998 when it hit a bottom of 32.55 cents, the all-time low.

All revved up with nowhere to go

The decline in gasoline prices in the past provided a boost for the economy and individual consumers. In March 2020, the world changed. The spread of Coronavirus caused the world to close down business causing economic activity to come to a sudden halt. Last week, India, the world’s second-most populous nation, ordered 1.3 billion people to stay home and shelter in place. The move followed in the footsteps of most states in the United States and many countries in Europe that have closed borders and issued orders to slow the spread of the virus. With no treatment or vaccine, scientists are working around the clock along with health professionals and those providing essential services. To prevent starvation and to limit the impact of the pandemic, the supply chain continues to operate, but most other businesses have shut with no clear timetable to reopen. Even when they do, the world will emerge with a new reality. Social distancing will not go away, and it will be a long time before the fear of the microscopic enemy abates.

When it comes to the gasoline market, Murphy’s law is in its full glory as the world is all revved up with nowhere to go in the foreseeable future.

A boost for the economy, but does it help?

The simple answer is no. Gasoline and other commodity prices are a symptom of the far more severe problem that threatens the health and wellbeing of every man, woman, and child on the planet. Coronavirus knows no borders; it does not discriminate based on age, race, religion, wealth, or political ideology. The virus is a threat to humanity and a reminder of just how precious life is in a world that may have needed a reminder.

On March 25, a reporter asked President Trump how many lives are acceptable to lose. His answer was none. New York Governor Andrew Cuomo said that lives come before the economy. The bottom line is that humanity will learn from this experience and may understand that all people are the same when it comes to facing the pandemic. Perhaps the most eloquent concept comes from the US Constitution, which states, “all men are created equal.” The modern-day translation replaces men with people.

The decline in the price of gasoline makes no difference for the US or world economy at this time.

An unsustainable price for refiners

The chain reaction of the symptoms of Coronavirus is massive. The decline in the price of gasoline and demand destruction has caused the refining margin to drop to a level where those companies processing petroleum into the oil product are not producing an economic return. Refiners do not take the price risk of the input, which is crude oil. Nor do they undertake the price risk of the output, gasoline. Companies like Valero (VLO) and others in the refining business undertake significant costs to build and maintain the cracking facilities and depend on the processing margin for profits.

The quarterly chart highlights that the processing margin for gasoline only dropped to the recent level once before, during the 2008 financial crisis. The recent low in the spread was at -$3.85 per barrel, which means that refiners lose money in the capital-intensive business. In Q3 2008, the spread dropped to a low of -$15.97, and in Q4 to -$7.45 per barrel.

The longer the current crisis lasts, the more losses will pile up at refineries. At the same time, as people become infected, the pool of workers declines, which leads to idle refineries. Today’s glut to gasoline that pushed the price to the lowest price since the late 1990s could lead to tomorrow’s shortages as inventories decline, and demand eventually returns to the gasoline market.

Meanwhile, the distillate crack spread has done better, which reflects the effort to keep the supply chain intact. Heating oil is a proxy for other distillates such as jet and diesel fuels.

While the distillate crack spread dropped to a low of $13.44 per barrel but recovered to the $2.77 level at the end of last week. Even though air travel has declined dramatically, a slowdown in refining because of the virus could cause the first demand shock in distillate prices as diesel demand rises to keep the supply chain operating in nations around the globe.

UGA tracks the price of gasoline, but watch the contango

The future or the US and global economies are not in the hands of the central bankers pumping unprecedented amounts of liquidity into the global financial system. Nor is it in the hands of politicians scrambling to buy time via bailout packages for individuals and companies. The treatments and vaccines that address the pandemic will come from scientists and health care professionals who hold the key to the economic future of the world. I am confident that they will provide the answer, but science moves a lot slower than markets or the virus. The financial fallout will be unprecedented and will mount the longer it takes to find a way to control the spread and eventually kill the virus. Moreover, the human tragedy mounts will every infection, and each person that succumbs to the virus. Human suffering is the number-1 concern, but the economic tab will be enormous.

Eventually, the price of gasoline will rise. If the output of crude oil declines on the back of low prices, and there is a significant reduction in refining, a shortage could develop, leading to explosive price moves in the oil product. March 2020 was Murphy’s month as everything that could go wrong went wrong. In physics, each action has an opposite and equal reaction. One day, perhaps in the not too distant future, everything that can go right will.

The most direct route for a risk position in gasoline is via the futures and futures options that trade on the NYMEX division of the CME. The United States Gasoline Fund (UGA) is an ETF product that replicates the price action in the gasoline futures market. The top holdings and fund summary for UGA are: 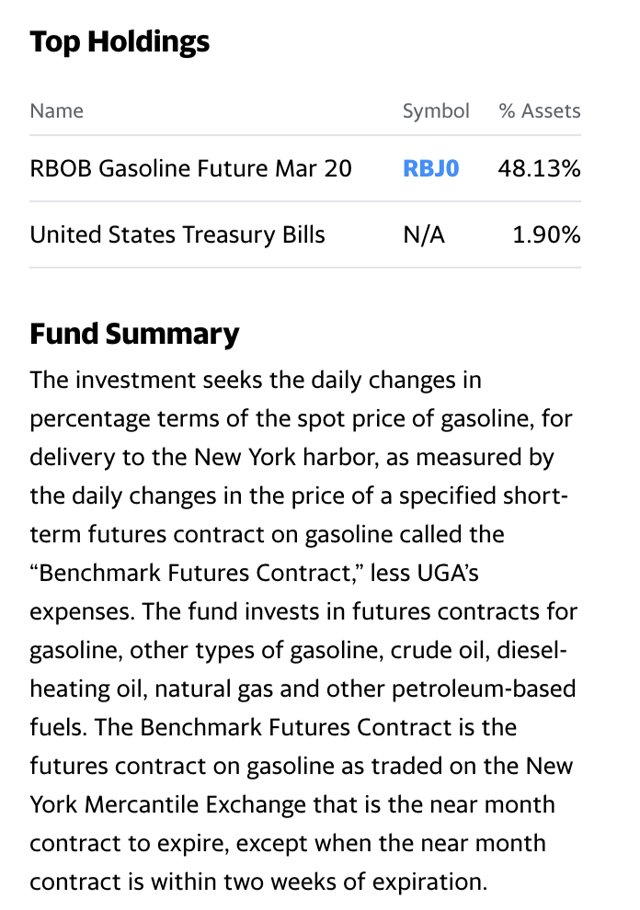 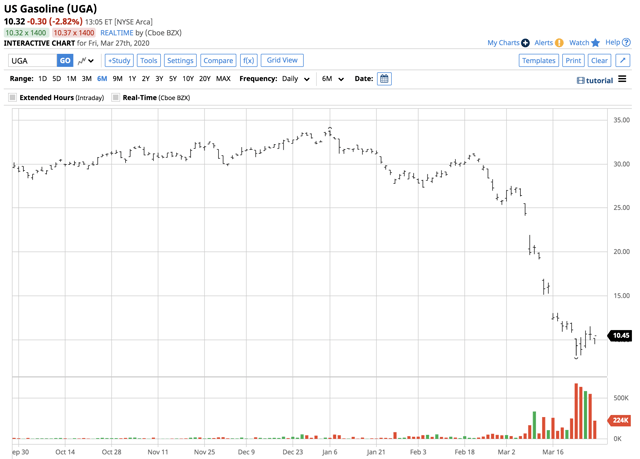 2/2 © Reuters. FILE PHOTO: The logo of Amazon is seen at the company’s logistics center in Bretigny-sur-Orge, near Paris, France, December 7, 2021. REUTERS/Gonzalo Fuentes 2/2 By Lisa Baertlein and Richa Naidu LOS ANGELES/CHICAGO […]