The coronavirus outbreak that started in China could certainly be considered an unexpected market shock, one which looks to remain a concern for a while longer. Franklin Templeton Multi-Asset Solutions’ Ed Perks and Gene Podkaminer offer an update on the latest developments in the spread of the coronavirus, its implications for global markets, and outline how they approach unexpected shocks like this one and others.

Familiarity makes us feel safe, but it is a bias known as habituation. In contrast, a new threat or high-profile event will grab more attention than they necessarily deserve. A single catastrophic plane crash is always more newsworthy than a hundred separate automobile crashes.

Similarly, seasonal flu is a familiar threat to our health, that we live with and accept as an annual risk, but which kills tens of thousands in the United States every year. The outbreak of a new coronavirus strain (Novel Coronavirus or nCov for short) is clearly an exotic threat that is difficult to analyze, and one that we are not familiar with. But, broadly speaking, deaths from epidemics are declining, even if news coverage often leaves out this important fact.

Additionally, the world has seen rapid developments in technology since SARS (severe acute respiratory syndrome) first struck in late 2002. It is now possible to identify a virus from its DNA in a matter of hours. Previously, such sequencing would have taken weeks. Such technological developments speed the identification of cases and the development of effective treatments.

Despite this context, the outbreak of nCov is creating havoc in China and heightened concern across the globe. The World Health Organization (WHO) has officially declared it a global health emergency. As of February 3, 2020, the death toll has risen to well over 300 and there are more global cases officially reported than during the SARS epidemic. The situation remains troubling and fluid.

As we entered calendar year 2020, several upcoming political and geopolitical events were already on our radar. The nCov outbreak was unexpected, and has reminded us of the need to maintain diversified portfolios.1 We have written about protecting portfolios from shocks from economic growth, inflation and interest rates, and believe the current situation will most likely be felt in assets which are tied to economic growth.

Unexpected shocks and volatility in asset prices can provide temptation to trade around news flow and emotion. Our investment process is designed to avoid these pitfalls and instead focus on our expertise, which centers around economic and market fundamentals. This does not mean that we ignore events like the nCov virus. Instead, we focus on how this event will affect the fundamentals and adjust our portfolio asset allocation accordingly.

Economic Impact of nCoV: What We Expect

We maintain that the broad global macroeconomic backdrop is improving, notably as growth is stabilizing. However, we acknowledge that the nCov episode is making the stabilization process much more difficult, and noisier. We expect growth to experience an immediate hit in the first quarter of 2020, especially in regions most directly affected by nCov like China. However, we also expect a V-shaped recovery once the episode passes that should be supported by additional counter-cyclical policy measures. This catch-up period will likely offset any first-quarter weakness we see.

For reference, the SARS outbreak impact on China’s economy included slowing gross domestic product (GDP) growth from an average of 10.5% quarter-over-quarter (q/q), seasonally adjusted (saar) growth pace in the four quarters through the first quarter of 2003 to 3.4% q/q saar in the second quarter of 2003, followed by a significant rebound to an average of 13.5% q/q saar in the second half of 2003.2

Our team members on the ground are reporting that people in China have been canceling their travel plans, curtailing social interactions, and foregoing outings. That is leaving restaurants, cinemas, theaters and hotels empty, with much-reduced traffic in the transport hubs that are still in operation. We are paying close attention to this reduced activity, as the Chinese economy has greatly evolved since 2003. Services and consumption account for a much larger portion of GDP growth today (chart below). 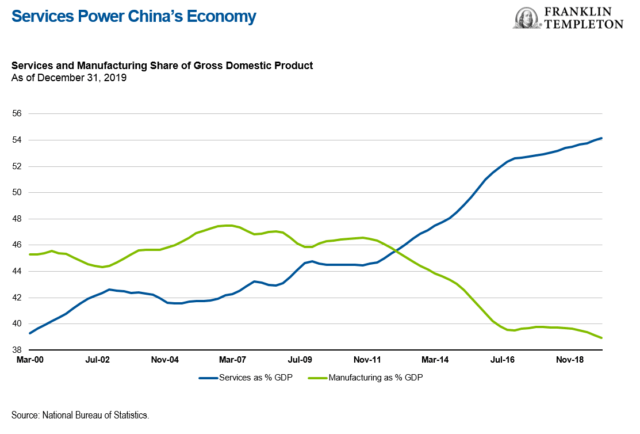 Furthermore, China’s influence over the world, particularly the Asian region, has dramatically increased over the past two decades. China has a large influence over global supply chains and accounts for an increasing amount of tourism. Any sort of slowdown in China will likely have ripple effects throughout the region. 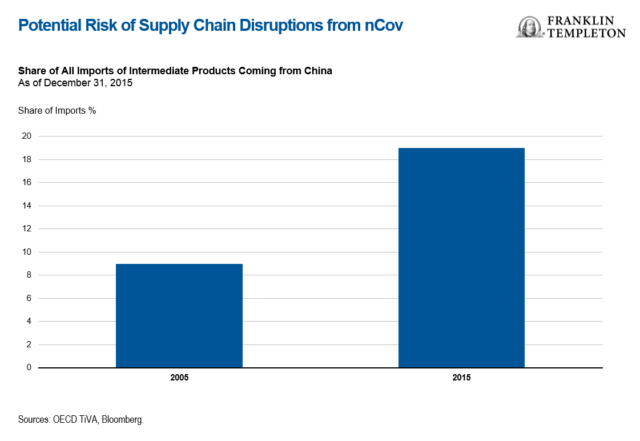 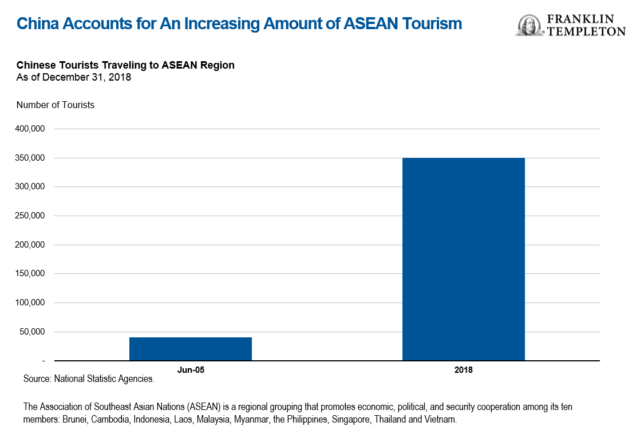 The Market Impact of nCoV

We have seen that pandemics can produce volatile market reactions, with a tendency toward a sell-off and quick rebound, almost always offsetting the initial drawdown. We attribute these fierce V-shaped recoveries to the generous monetary and fiscal policies that have typically followed similar events. This is true both at the global level, and also at the local level where the episode has the most direct impact. In our view, the biggest disparity in market impact will likely be regional instead of across the capital structure. Regionally, our preference from an investment standpoint would be to focus on markets that have both policy flexibility and are more insulated from the nCov epidemic. 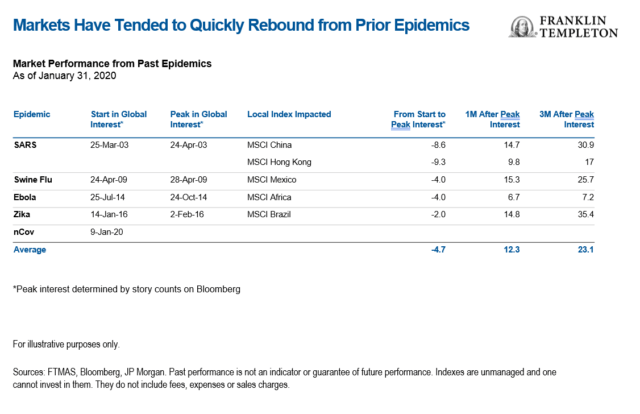 Two such markets are the United States and the United Kingdom; both are relatively closed economies in which trade contributes a smaller portion to GDP growth. Additionally, the United States and United Kingdom still can cut interest rates if policymakers need to respond to a growth slowdown. On the other hand, the eurozone and Japan are more reliant on trade as a contributor to growth, and policymakers in these regions are also more stretched, with less room to counteract a growth slowdown.

Signals We Are Watching that Can Make Matters Better/Worse

The signals below would suggest we are more likely toward the end of the nCov episode:

Some signals that would suggest the nCov health scare may get worse:

We will continue to monitor this situation as it develops and remain nimble within our investment approach to this and other potential market shocks.

What Are the Risks?

All investments involve risks, including possible loss of principal. Stock prices fluctuate, sometimes rapidly and dramatically, due to factors affecting individual companies, particular industries or sectors, or general market conditions. Bond prices generally move in the opposite direction of interest rates. Thus, as the prices of bonds in an investment portfolio adjust to a rise in interest rates, the value of the portfolio may decline. Special risks are associated with foreign investing, including currency fluctuations, economic instability and political developments. Investments in emerging markets, of which frontier markets are a subset, involve heightened risks related to the same factors, in addition to those associated with these markets’ smaller size, lesser liquidity and lack of established legal, political, business and social frameworks to support securities markets. Because these frameworks are typically even less developed in frontier markets, as well as various factors including the increased potential for extreme price volatility, illiquidity, trade barriers and exchange controls, the risks associated with emerging markets are magnified in frontier markets.

1.Diversification does not guarantee profit or protect against risk of loss.