Consumer discretionary giant Starbucks (SBUX) has held up relatively well during this crisis. Of course, consumer spending appears to be plummeting given the lockdown conditions present in most of the developed world, but you wouldn’t necessarily know it by looking at a chart of shares of the drinks powerhouse. Shares have rallied by about half just since the bottom a couple of weeks ago, and given where we are with COVID-19 uncertainty, if you missed that rally, I don’t see a lot of reason to buy today.

A hiccup in growth, but other concerns arise

Starbucks has been a fast grower for many years. It has aggressively expanded its store base worldwide and posted strong comparable sales year after year. The problem is that any company must slow down its growth eventually because at some point, the comparable base is too large to continue to grow at high rates. Starbucks doesn’t yet appear to have hit this inevitable plateau, however, as we can see below.

Of course, there will be a decline in revenue this year. The current forecast is for the top line to decline about 4% against last year, which seems relatively tame in comparison to how badly things are going for other consumer discretionary businesses. Starbucks has mostly kept its drive-thru windows open, and that is helping curtail some of the damage. At any rate, a strong rebound is expected into 2021, and then a resumption of high-single-digit revenue growth annually thereafter.

That’s all fine and I don’t doubt that Starbucks will resume its revenue growth when this mess is over. What I’m wondering is how all of this will translate to earnings. Below, we have consensus estimates for EPS for the coming years, which shows what I think is a pretty interesting phenomenon.

EPS will plummet this year on lower revenue as analysts currently expect a 40% decline in EPS from a 4% fall in revenue. That’s absolutely enormous and it highlights what I think is a problem that the market is ignoring these days for Starbucks: margins.

Below, we have operating income in millions of dollars and the resulting operating margin as a percentage of revenue for the past few years to get an idea of what I’m on about. 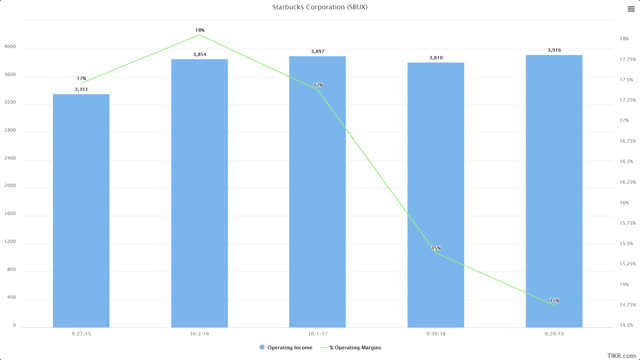 Starbucks has managed to grow its operating income over time, but nowhere near the rate of revenue. That implies that operating margins must be declining and indeed, that is exactly what is happening. Operating margin was 18% of revenue a few years ago and last year, was under 15%. The culprit has been lower gross margins, primarily, and to a lesser extent, higher SG&A costs as a percentage of revenue. This has crimped the company’s operating income growth in a huge way, but Starbucks has thus far been able to mask it with capital returns.

Below, we have the company’s capital returns for the past five fiscal years in millions of dollars.

Starbucks used to simply return roughly what it generated in free cash flow, but those days have passed. In the past two years, Starbucks has returned a total of $3.5 billion in dividends, and a further $18.5 billion in share repurchases. That is a huge amount of money for a company with less than $4 billion in operating income per year, so where has it come from?

One source is free cash flow, the two major components of which we can see below in millions of dollars.

Free cash flow was right at $10 billion two years ago, but on a normalized basis, that value is generally $3 billion or so. With declining margins and revenue contraction for this fiscal year, you can bet it will be much lower than $3 billion, with a presumed return to normal for 2021.

That’s really beside the point, however, as Starbucks has returned many billions of dollars to shareholders in the past two years than it has generated from free cash flow. The balance of the returns can be seen below.

This is the company’s long-term debt and net debt, respectively, for the past five years, and the result is a bit stunning. Net debt spent years and years at very manageable levels, but the company’s borrowing spree in the past few years – combined with massive capital returns – has left the balance sheet as a shadow of its former self. The good news is that Starbucks had lots of cash on the balance sheet a couple of years ago. The bad news is that this has gone and has been replaced by debt.

Right, I can hear you saying, why should I care? There are a couple of reasons I think this impairs the bullish earnings trajectory case over time. First, this activity has significantly reduced the financial flexibility of Starbucks. It now has more than two years’ worth of operating income sitting in net debt on its balance sheet when before, it was a couple of months’ worth. That means that the borrowing spree to reduce the float cannot be sustained forever; Starbucks simply cannot afford to do so.

The second is that all of this new debt is costly, as we can see below with the company’s investment income and interest expense, both in millions of dollars.

Starbucks has produced net gains from this activity in the past but last year, the net was a loss of $200 million, between $331 million in interest expense and $131 million in investment gains. That $200 million is a new headwind for earnings growth and the more the company borrows, the worse this will get.

To be clear, I’m not saying Starbucks has some sort of liquidity issues or cannot service its debt; that would be a ludicrous claim to make. What I am saying is that all of this borrowing makes the stock less attractive because it further crimps net margins via higher interest expense, and it means that the borrowing that has sustained share repurchases in recent years almost certainly has to slow.

Starbucks has done a masterful job of building its brand worldwide over time. It is one of the pre-eminent consumer brands that has ever existed, and it is a terrific business. However, the stock is being priced like it will continue to grow the way it has forever, and given the issues raised above, I simply don’t believe that to be a reasonable assumption.

Analysts currently expect $3.30 in EPS for 2022, which should represent a fully normalized EPS number following what should be a post-COVID-19 rebound. Shares are trading for 22 times that number today, on earnings that may or may not occur for another two years. With normalized EPS growth expectations in the high-single-digits, 22 times earnings two years from now is quite dear.

Further, higher interest expense and what almost certainly has to be a slowing of capital returns in the coming years due to soaring debt levels combine to create a substantial headwind for EPS. Starbucks has done a great job of reducing the float, but it has done so by draining its balance sheet of cash and then borrowing more on top of that. This behavior is, by definition, unsustainable over the long term.

Thus, wrapping all of this up, we have a stock that is priced for lots of growth, but one that has two significant headwinds, even if you ignore COVID-19. As a result, if you missed the rally from the mid-March bottom, I think it is too late to buy Starbucks.