The purpose of this article is to evaluate Mid-America Apartment Communities Inc. (MAA) as an investment option. MAA is a stock I had owned for a while, and I am now tempted to get back in at its current price. While Real Estate is down big in 2020, MAA has managed a better return than the sector as a whole. While MAA lags the S&P 500, I continue to view the exposure positively, as the broad indices are getting heavily concentrated at the top. MAA offers a way to diversify, and also gain access to a stable income stream. Further, the company’s Q2 financial results show it has been handling the Covid-19 crisis relatively well. While distressed sales have ticked up in some sub-sectors, such as hotels, retail, and office space, apartment REITs are not facing the same reality. This makes MAA a safer buy in my view.

First, a little about MAA. The company is a “real estate investment trust that focuses on the acquisition, selective development, redevelopment, and management of multifamily homes throughout the Southeast, Southwest, and Mid-Atlantic regions of the United States.” MAA has ownership interests in over 100,000 operating apartment homes in 17 states and Washington, D.C. Currently, the stock is trading at $113.01/share and yields 3.48% annually. This is a stock I have recommended on multiple occasions, including earlier this year. Unfortunately, while MAA initially held up better than the broader market when the sell-off began in February, that trend did not last. The stock took a big hit, and has been slow to rebound in comparison to the S&P 500 since my last review, as shown below:

Despite this weak short-term performance, I continue to like the story behind MAA, and it has been a good long-term hold for me. After giving it another look, I believe a bullish rating is still warranted, and I will explain why below.

Real Estate Is Lagging, But MAA Is Beating The Sector

To begin, I want to briefly touch on the elephant in the room, which is Real Estate’s poor performance. As a result, it may seem counter-intuitive to recommend buying a REIT at this time. Of course, for contrarian investors, they may see the sell-off in Real Estate as an opportunity, which is a fair assessment. However, the challenges facing commercial Real Estate, such as continued state lock-down orders, rising e-commerce trends, and a shift towards remote work environments, will not reverse in the short term. Thus, the pain the sector is experiencing could certainly continue, which is especially true if market volatility picks up. The sector is not immune to broad macro-economic concerns, so investors need to think carefully on any new positions at this time, whether in Real Estate or not.

With that said, there is some support for considering MAA within this space, based on its past performance. While MAA has had a rough year, it has actually outperformed the broader sector, as measured by the 1-year returns of MAA against the iShares U.S. Real Estate ETF (IYR), Schwab U.S. REIT ETF (SCHH), and Vanguard Real Estate ETF (VNQ), as shown below:

As you can see, while all the options have underperformed the S&P 500, MAA has managed to edge out the sector ETFs, especially SCHH. What is perhaps more comforting is this performance divergence is even greater when we consider a longer time horizon, such as five years, as shown below:

My takeaway here is to illustrate to investors why I like selective positions, such as MAA, over the broader Real Estate sector. The long-term performance is clear, and I will discuss in more detail the attributes in place to help this trend continue. However, investors should also recognize the graph shows Real Estate as a whole, including MAA, has not been able to keep up with the S&P 500. Looking ahead to the end of the year and into 2021, I do not expect Real Estate, MAA or otherwise, to markedly beat the broader market. I say this to manage expectations going forward. I believe MAA is a solid company, with an attractive dividend, and a history of leading its sector. But investors should enter into this to play to diversify their portfolio and earn income, not to “beat” the market.

I now want to dig into MAA’s recent financials, with Q2 results coming out at the end of July. Since I have been covering MAA, the company has had strong earnings reports, and Q2 2020 did not diverge from this trend. In fact, the results actually surprised me to the upside, as I had expected Covid-19 pressures to weigh more heavily on the company. While the headwinds from the virus will undoubtedly pressure occupancy rates and rental increases, so far the company has managed to come through the crisis with strong figures.

To illustrate, I compiled some important metrics from the Q2 earnings release and compared them against Q2 2019, shown in the chart below:

The major takeaway here is the figures were pretty strong, when we consider the macro-environment the company is operating in. With many people out of work and struggling to make ends meet, rental collections appear quite strong for MAA, which is a very good sign. Net income and FFO are both up for the company, and the occupancy rate is almost identical to where it stood during my last review. Overall, this tells me the company is well managed, and its tenants have continued to pay their rent on time despite the economic challenges. Unless we see a material change in the months ahead, I expect Q3 to bring about more of the same, pointing to the resilience of this company.

My next point looks at the broader commercial Real Estate sector, and how it has been faring in 2020. It goes without saying this is a difficult market environment, as many commercial properties are struggling with delinquent tenants, store closures, state lock-down orders, and reluctant consumers. Not surprisingly, hotel and retail REITs have been hit especially hard, with office space also seeing slowing demand. The end result of this environment right now has been an uptick in distressed sales. While manageable, the trend showing some deterioration in the hotel, office, and retail sub-sectors is clear.

To illustrate, consider the graphic below, which lists the number of distressed sales by sub-sector, putting the figure in perspective by share of sales volume: 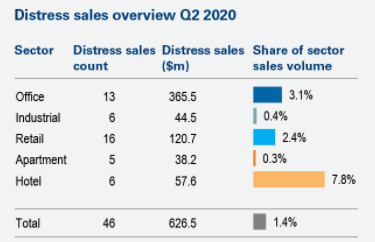 The main takeaway for me here is to highlight how resilient apartment REITs have performed during an unprecedented crisis. While the total figures do not suggest any of the sub-sectors cannot recover, the apartment sector stands out by having the fewest number of distressed sales, the lowest volume in dollar terms, and the smallest share of sales volume impacted by the distressed sales within its sub-sector.

Ultimately, I view this positively for MAA. The stock has been a long-term winner, and is well-positioned within one of the best performing sub-sectors within Real Estate to maintain its profitability in a difficult time. The graphic above tells me I want to stay away from retail and hotel REITs for now, but likewise tells me that apartment REITs are a reasonable way to build Real Estate exposure without taking on too much risk. This is a win-win for MAA.

Employment Market Does Pose A Challenge

Of course, there are plenty of inherent risks to buying into MAA right now. Despite the recent pullback in the market, stocks are still hitting at fairly high levels, which is true for MAA as well. Yes, the short-term charts look weak, but a longer term look-back shows us that stocks, whether in Real Estate or otherwise, are still a bit pricey. This exposes investors to plenty of downside risk, especially if the Covid-19 crisis lingers for longer than expected. At this point, it is hard to find true value. So while MAA may look reasonably priced compared to the S&P 500, I want to emphasize it is certainly not “cheap.”

With this in mind, one of the biggest risks I see to MAA’s profitability currently is the weak labor market. As I’m sure readers are aware, millions of Americans have lost their jobs in response to the virus, and many of those job losses are becoming permanent. Further, despite the partial re-opening of many states, unemployment claims remain stubbornly high, as seen below: 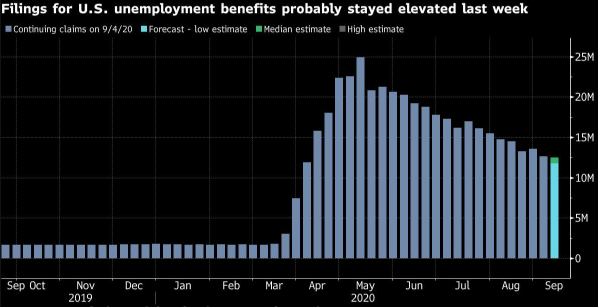 It should be clear what a weak labor market can have on apartment rentals. As Americans lose their jobs, and their income, making house and rental payments can become a challenge. While the country has brought back some of the lost jobs, we are not out of the woods yet. Further, Congress initially passed stimulus measures designed to bear some of the financial burden imposed on households as a result of Covid-19. The stimulus programs likely staved off some foreclosures and evictions, but further stimulus measures are up in the air at this point. This means we could see the rental market come under pressure in the coming months, if further job gains stall.

While I would not discount this risk completely, I want to emphasize why I like MAA in particular when evaluating apartment REITs. This is because the company primarily is focused on the southwest and southeast, which are fast-growing regions with a lot of young professionals. While millions of jobs have been lost, they have primarily been in service and blue collar areas, mitigating the impact on white collar professionals, as shown below: 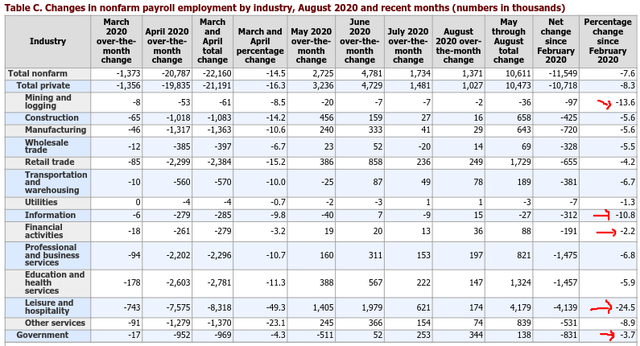 The graphic above highlights some of the worst-hit and least-hit areas. While leisure, hospitality, and mining/lodging suffered large cuts, areas in business and professional services, as well as government, have seen less of an impact.

My takeaway is this shows us how uneven the pandemic has been. While workers in many sectors are losing jobs and feeling financial distress, other areas have been much less affected. This means the apartment REITs, such as MAA, that cater more towards the professional classes should see fewer delinquencies and/or evictions. To understand why, consider MAA’s top markets, which are shown below:

These are areas that are filled with professional workers, and Washington, D.C., is notable for its large government workforce (federal employment has been largely unaffected so far). Ultimately, this explains the resiliency of MAA’s Q2 earnings report, and gives me confidence in the stock going forward.

MAA was one of my top investment calls in 2019, but 2020 has left much to be desired. Despite poor short-term performance, I remain bullish on the longer term story. The company owns rental apartments in the fastest regions of the country, and caters to professionals who were some of the least likely to lose their jobs during this crisis. This can be evidenced by the resilient Q2 financial earnings report, as well as the steady occupancy rate. With a stable 3.5% yield and a share price well off its highs, I see better days ahead for MAA. Therefore, I am looking to build a position in this stock, and I recommend investors give it some consideration at this time.

Disclosure: I/we have no positions in any stocks mentioned, but may initiate a long position in MAA over the next 72 hours. I wrote this article myself, and it expresses my own opinions. I am not receiving compensation for it (other than from Seeking Alpha). I have no business relationship with any company whose stock is mentioned in this article.