Given the rapid graying of America, with ~10,000 boomers turning 65 every day, it seems that healthcare should be a good sector to check out for future growth. However, all sub sectors within healthcare aren’t generating the same enthusiasm – senior living facilities have come under pressure, for example, while medical office buildings, MOBs, seem to be the sweet spot in this industry.

The high cost of in-patient care has accelerated the move toward higher utilization of MOBs. Another positive factor is that MOB tenants, networks which are often run by doctors, usually are reluctant to vacate a facility/locale where they’ve built up a practice and a relationship with a local hospital. Adding to this is the fact that many MOBs are on hospital campuses, (Healthcare Trust Of America (HTA) is the biggest on-campus owner), which helps patient and doctor logistics. One other supportive feature – MOBs put their REIT owners one further step away from regulatory risk.

Healthcare Trust Of America is the largest MOB landlord REIT in the US, with 25M square feet of on-campus space:

HTA’s MOB’s form 93% of its holdings, with multi-tenant properties its largest sub-segment, at ~68%, followed by single tenant properties, at 25.2%. It also owns 6% worth of hospitals and just 1% of Senior Care facilities:

Health systems & Universities form 59% of its annualized base rent, followed by local healthcare providers, at 26%, and national/regional providers, at 15%. 45% of its tenant base is rated investment grade. No single market accounts for more than 10% of rent, and no single-tenant accounts more than 4.2%: 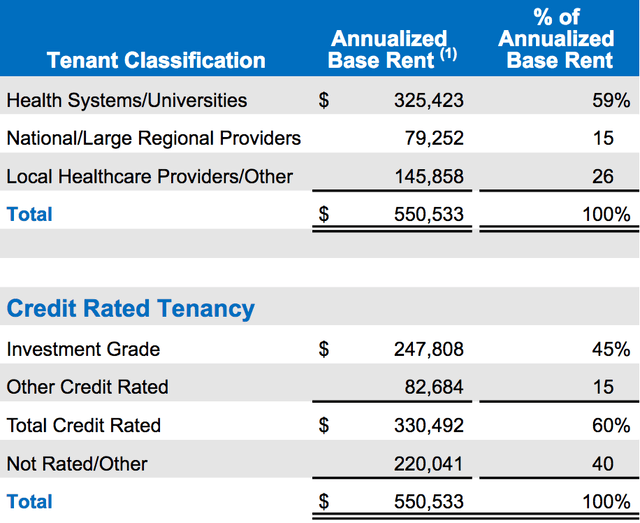 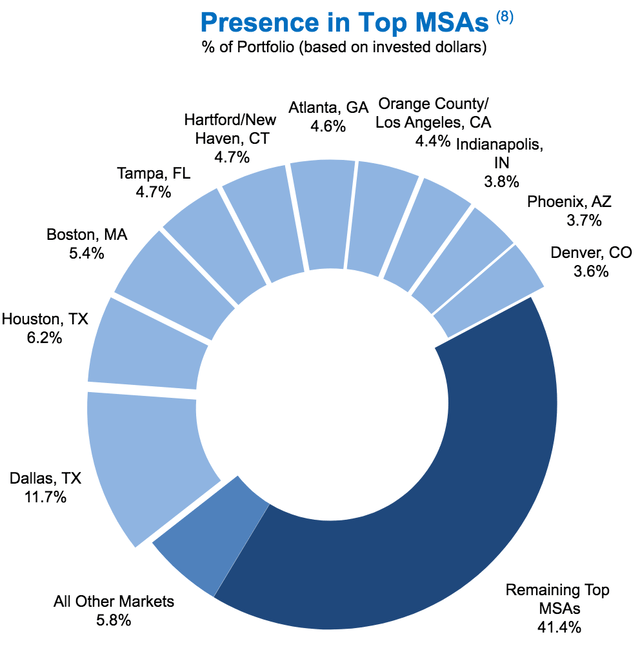 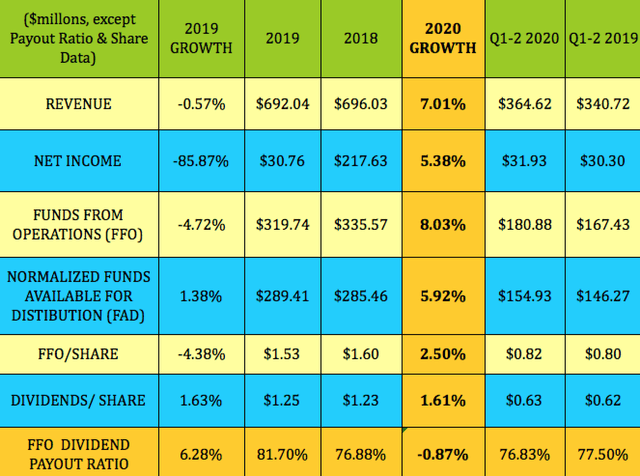 Same store growth was 2.7% in Q1 20, and then slowed to .6% in Q2 due to the lockdowns and patients delaying elective procedures. HTA has averaged 2.7% same store growth since 2015, which is just above the REIT MOB average of 2.6%. 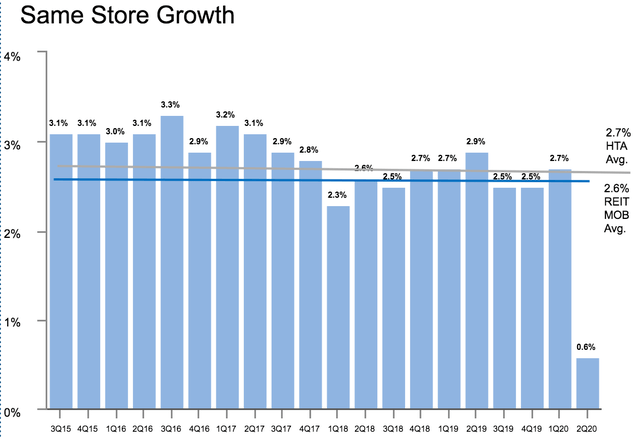 In Q2 2020, HTA collected 98% of contractually scheduled rents, including 3% of rents subject to deferral agreements or ~$6 million. Half of those were made to leading healthcare systems with whom they agreed to defer rent as a sign of a long-term partnership philosophy. Collections in July and August were consistent with these levels.

Management also signed ~1.2 million square feet of renewals, with almost 500,000 square feet of early renewals, which allowed HTA to extend terms at attractive rates. ~90% as tenants opted to stay in place while operating through Q1-2 2020. 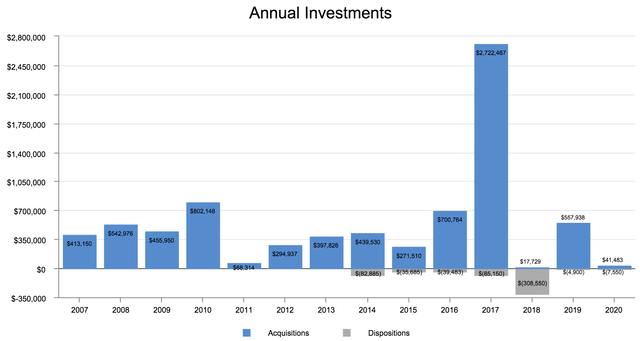 It goes ex-dividend in an April/July/Oct./late Dec. schedule, and pays in the early part of the following month. Its trailing 12-month FFO/dividend payout ratio is 81.29%, down slightly from its 2019 ratio of 81.7%. 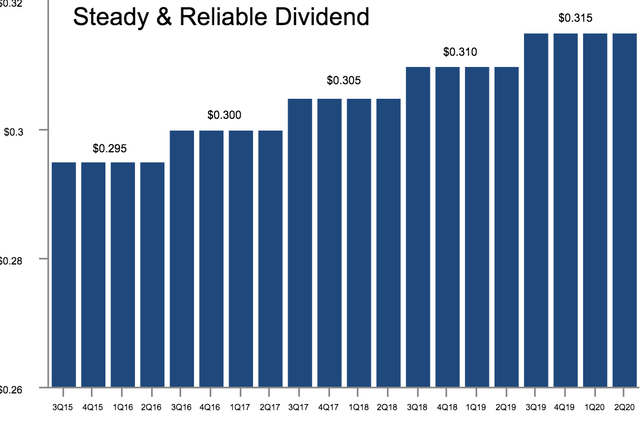 ROA, ROE and total debt/equity were nearly unchanged in Q2 2020 vs. Q4 2019, and remained below healthcare REIT industry averages. whereas the EBITDA Margin slipped to 60.58%, and EBITDA/interest coverage was lower, but still healthy, at 4.48X. Trailing net debt/EBITDA was higher, at 6.33X. 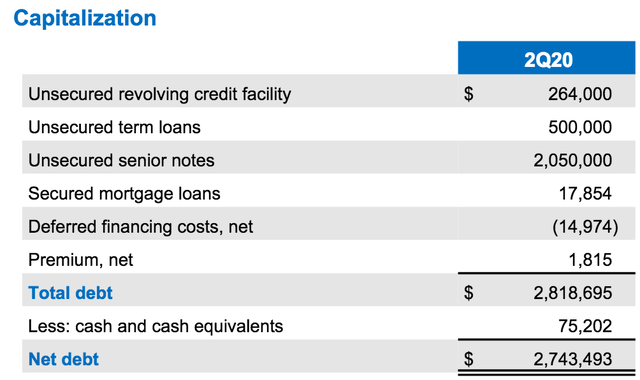 In September, HTA issued an $800M offering of 2.000% senior unsecured notes due 2031, the net proceeds of which will be used to redeem all outstanding 3.70% Senior Notes due 2023, to repay outstanding indebtedness for general corporate purposes.

HTA’s next major debt maturity isn’t until 2022, when its credit revolver comes due: 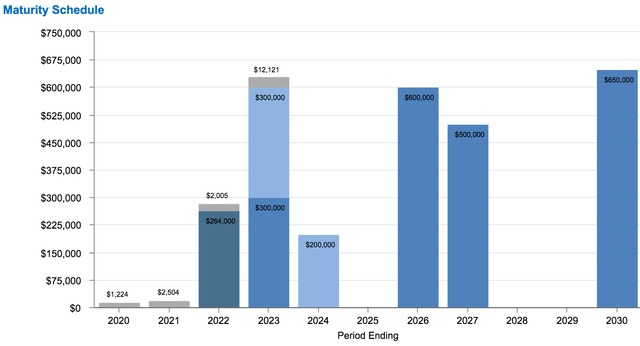 HTA appears to be getting a premium trailing FFO/share valuation – it’s 16.44X, vs. an industry average of 13.49X. Investors like the current resilience and future prospects of the MOB niche. Its other valuations are roughly in line. 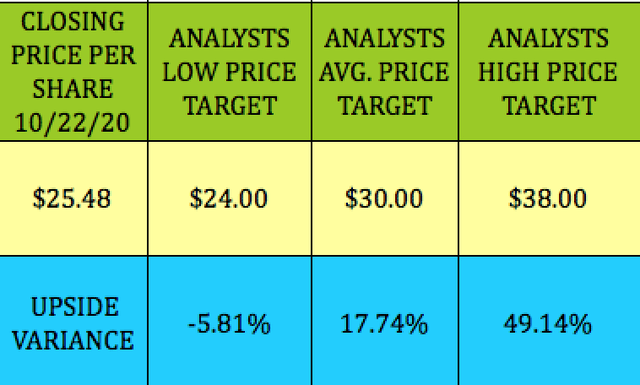 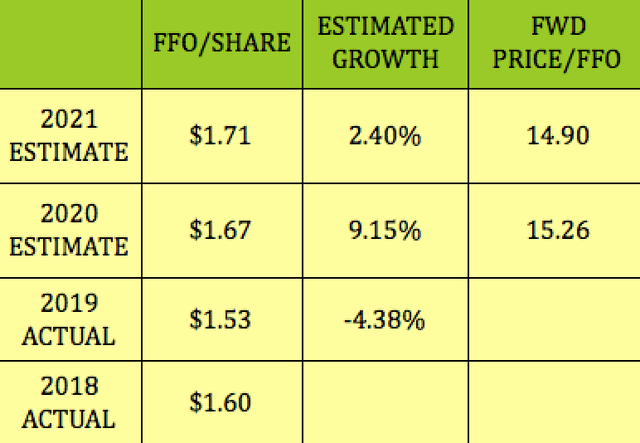 NOTE: Put sellers don’t receive dividends. We add them to our put options charts, so you can compare them to the options dollar amounts. We use annualized yield in all of our options tables, so that users can compare trades of different lengths.

You can see more details for this trade on our free Cash Secured Puts Table.

All tables by DoubleDividendStocks.com, except where noted otherwise.

We scour the US and world markets to find solid income opportunities with dividend yields ranging from 5% to 10%-plus, backed by strong earnings.

We publish exclusive articles each week with investing ideas for the HDS+ site that you won’t see anywhere else.

We offer a range of income vehicles, many of which are selling below their buyout and redemption values. Our latest buyout success story has a 39% total return.

Disclosure: I/we have no positions in any stocks mentioned, but may initiate a long position in HTA over the next 72 hours. I wrote this article myself, and it expresses my own opinions. I am not receiving compensation for it (other than from Seeking Alpha). I have no business relationship with any company whose stock is mentioned in this article.

Additional disclosure: Our DoubleDividendStocks.com service has featured options selling for dividend stocks for over 11 years.

It’s a separate service from our Seeking Alpha Hidden Dividend Stocks Plus service.

Disclaimer: This article was written for informational purposes only, and is not intended as personal investment advice. Please practice due diligence before investing in any investment vehicle mentioned in this article.

Tourmaline Oil (OTCPK:TRMLF) is a Canadian oil and gas producer that predominately focuses on the Alberta Deep Basin. Despite its name, it is mainly a natural gas producer (around 78% of total production), with oil […]