Shares of Match Group Inc. (NASDAQ:MTCH) are down 17.25% since peaking on January 16, 2020, and in my opinion, the shares of this provider of online dating apps such as Match and Tinder are a compelling buy at current price levels. The company has a strong history of generating consistent earnings growth, and the future growth ratios point to continued growth over the next 12 months. I lay out my bullish argument for the company by reviewing some pertinent fundamental and technical aspects of the stock.

My Momentum Growth Quotient (MGQ) plays a critical part when it comes to determining if I’m going to go long or short a stock. Generally, I only want to go long a stock with an MGQ higher than that of the Dow Jones Industrial Average, and I want to go short a stock with an MGQ lower than that of the index (for a more detailed explanation of how I calculate the MGQ, please see my blog post).

The current MGQ for MTCH stands at 24.18, which implies an 82.08% higher growth rate compared to the DJIA. This tells us that MTCH has strong future growth potential and is a good candidate for a long position.

Let’s dig a little deeper into the financial data to get a better feel for how the company has performed on certain fundamental metrics and what these numbers imply for future growth.

Caveat Lector: I am a Quant Trader – that is, I seek to understand market behavior by using mathematical and statistical modeling, measurement, and research. So, you won’t find much qualitative analysis in my work or in my trading process. The goal is to identify optimum entry points for trades based on my quantitative model and execute those trades as effectively as possible.

Knowing how a company has performed in the past is important in order to evaluate management’s past record in running the business. But more important to us is how profitable the company will be in the future because we are investing going forward, not backward. And, it’s the forward-looking metrics that should really get you excited about MTCH.

I like to use two measuring sticks to gauge the future growth potential for companies: Forward P/E and forward rate of return.

I prefer to use the Forward P/E Ratio (current stock’s price over its “expected” earnings per share) rather than historical P/E to gauge a company’s expected future earnings power. A high forward P/E ratio means that investors are anticipating higher growth in the future and are willing to pay more for future earnings – momentum investing is all about following the trend (perceived or real).

The risk inherent in the forward rate of return is that the calculation is reliable only if the company can grow at the same rate in the future as it did in the past. If the growth rate falters, the projected returns will not materialize. But we are willing to accept this risk as part of the difficult process of forecasting earnings and growth momentum.

As per my ChartMasterPro Daily Trading Model, there’s a high probability of a rally to the $90.00 level from here over the next three months for MTCH, which would equate to a gain of around 17% for the shares.

On Feb 14 I went LONG MTCH via call options that carry around 10x leverage for the trade.

For investors who wish to buy the shares, I believe that an entry point at the current share price offers more upside reward than downside risk over the next three months. For longer-term investors, I believe MTCH is a solid addition to any growth portfolio over the next 12 months.

When looking for companies to invest in, I like to find management teams that have outperformed their peers in the same industry with regard to growing earnings, running the company efficiently, and generating higher-than-average returns for shareholders.

This is a company that’s posting much higher profit margins than its peers, with a management team that’s very good in turning revenue into earnings, and generating higher returns on equity than its competitors. The price drop in the shares over the last month presents an excellent opportunity to initiate a position in MTCH.

As stated in the company’s Q4 2019 Earnings Call, the company posted healthy growth numbers for the quarter: total revenue was $547 million, up 20% YOY, but without foreign currency negative headwinds, revenue would have grown 21%; operating income grew 19%, and EBITDA was up 22%; and selling and marketing costs declined to 18% of revenue, the lowest level since the company went public. So, revenue, net income, and marketing costs are all moving in the right direction, showing a strong growth trajectory on a year-over-year basis.

As the chart below shows, Tinder has been the main engine for both revenue and earnings growth for the company over the past five years. Tinder has posted a CAGR of 123% over the five-year period and still accounts for around 54% of total company revenue. In the most recent quarter, Tinder direct revenue grew 39% YOY, and the subscriber growth came in at 36% YOU – both very strong growth numbers for the app. 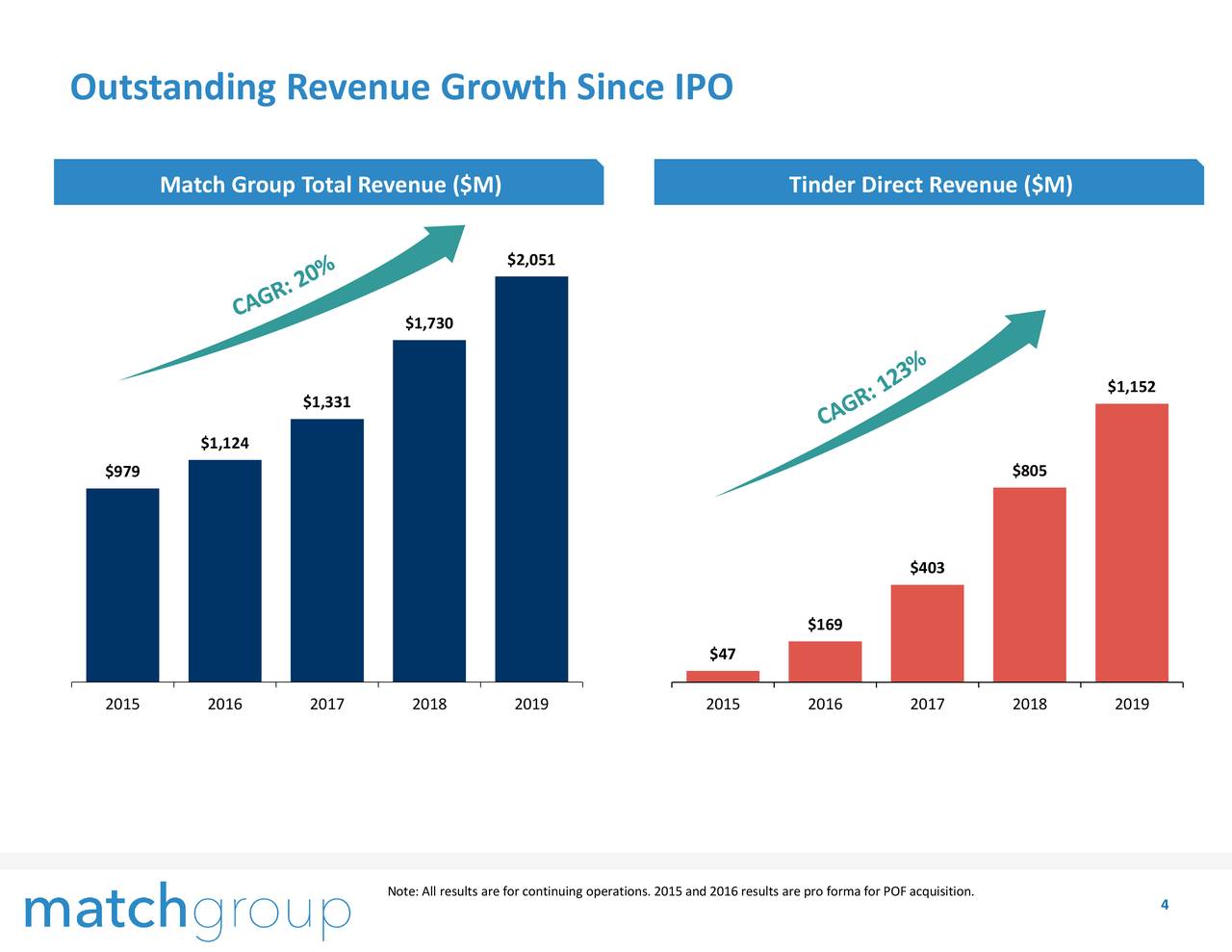 Although Tinder remains the main driver of growth, the company is investing heavily in new apps to broaden their revenue stream and provide new growth in both revenue and earnings. One example is Hinge: a dating app that uses connections to Facebook friends to facilitate dating connections. As the chart below shows, there is a huge opportunity for the company to improve both conversion rates and ARPU (average revenue per user) for Hinge over the next twelve months. 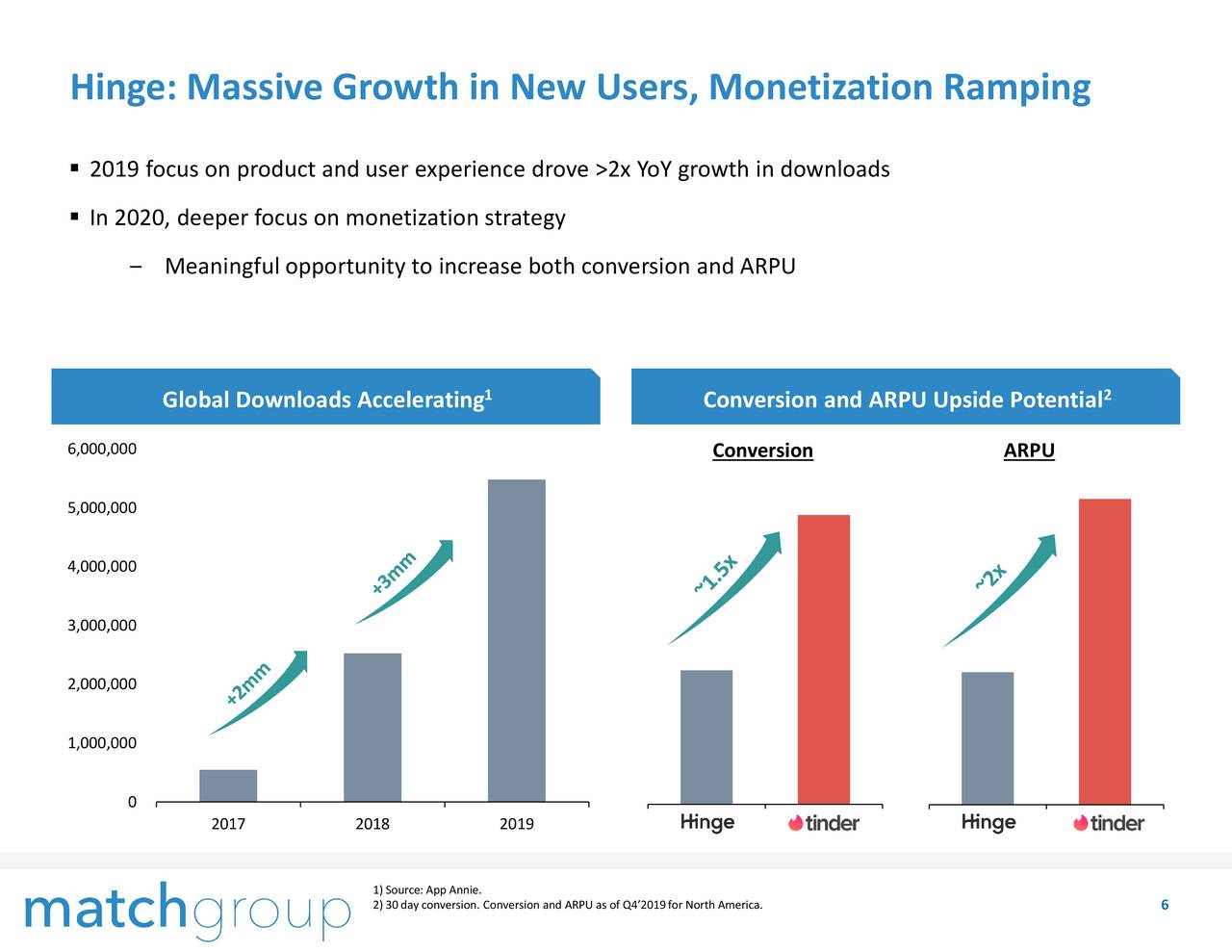 In addition to Hinge, the company has other apps that are in the early phases of growth: Ablo, which is a person-to-person text and video chat app, was named the 2019 app of the year by Google; Chispa and BLK are apps targeted for the Hispanic and African-American communities, respectively, and both are already in the monetization stage; and the company has taken the first step to tap into the global Muslim demographic group by buying a dating app in Egypt.

When I go long a stock, I want to invest in a company that provides superior future growth potential, but I also want to time the entry into any position to try to maximize my return.

In my opinion, MTCH will soon be an attractive buy at these levels from both a fundamental and technical perspective.

To view the option details (strike price, expiry date, and leverage), you can sign up for a Free Trial for The Options Trader. Only Members receive detailed trade alerts.

Disclosure: I am/we are long MTCH. I wrote this article myself, and it expresses my own opinions. I am not receiving compensation for it (other than from Seeking Alpha). I have no business relationship with any company whose stock is mentioned in this article.