Stocks, especially utilities, roared back in a holiday-shortened week, helped by additional stimulus measures and signs of hope from daily COVID-19 statistics. Midstream stocks (and to a lesser degree MLPs) came along for the ride. The midstream performance hierarchy returned to trend this week with AMNA outpacing AMZ.

A potential OPEC+ agreement with or without participation from the U.S. was the hope that seemed to propel energy stocks this week. But the deal remained uncertain by the time the market closed Thursday and oil prices were down sharply on the week.

Midstream stocks basically kept pace with the broad equity market, so maybe the move this week was less about oil prices and more about stocks generally. Midstream, like the rest of the market, continued to benefit from a rebound in interest after an awful March.

The only notable piece of midstream news was PAA‘s distribution cut this week. Expect the remaining uncertain MLP distribution announcements to come in the next week, including CEQP, NS, WES and NGL. The week after that is the beginning of earnings season.

Midstream took a break this week. There was no meaningful news and stocks were higher across the market. Further Fed stimulus played the role of “electronics time” for the market, which helped sentiment for energy stocks too. We’ll get back to worrying about how much demand destruction will happen, how much liquids storage is left and how much production will shut-in next week.

WES rallied 75% in four days this week and still yields around 50%! Other smaller high-yield, high-beta MLPs rallied hard as well. There were some negative MLPs this week, including two refinery-sponsored names PSXP and HEP. Closer to the wellhead stocks traded best this week in risk-on action, despite the collapse in oil prices week over week.

I went through this week and removed the following below $250mm market cap names from the performance charts: SMLP, GLOP, GMLP, OMP, HMLP, CCR, NRP, CINR and USDP. There are only 35 MLPs in the universe with more than $250mm in market cap at this point. 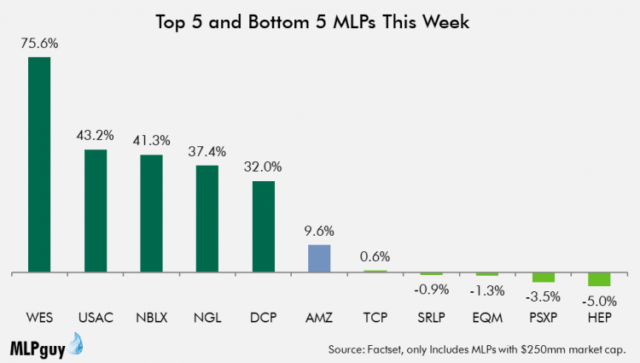 EQM went from leader last week to bottom 5 this week. NGL went from bottom 5 last week to top 5 this week, as volatility whips stocks around from. The math gets really hard after such a dramatic fall. For example, NBLX rallied 41% this week and is still down more than 80% year-to-date. WES’s 76% rally this week helped it climb out of the bottom spot, but it remains down 70% YTD, including distributions. 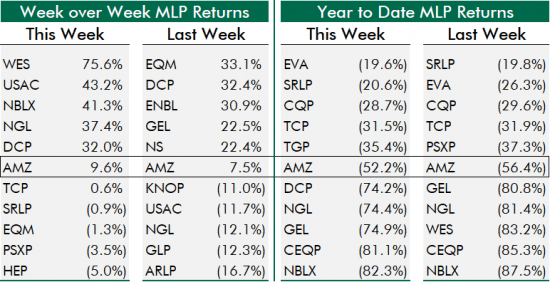 Closer the wellhead and higher beta was a winning combination in the midstream corporation group as well this week, with TRGP and OKE way out in front of the pack. That combo didn’t work as well for ENLC, which was negative. PAGP also underperformed after its distribution cut. 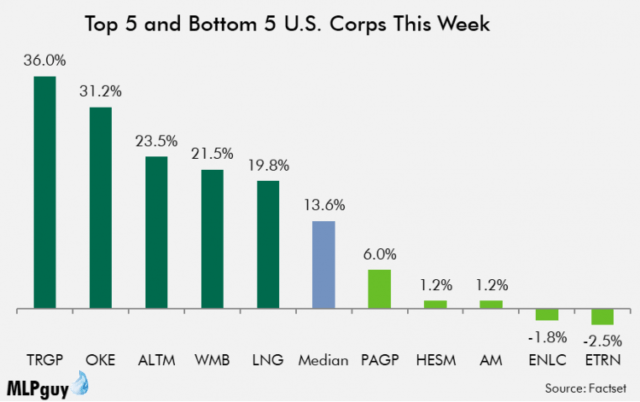 LNG and TRGP bounced into the top 5 after landing in the bottom 5 last week. ETRN, HESM and AM went from top 5 to bottom 5 week over week. On the YTD leaderboard, no change in the top 5, although LNG and WMB are catching up to KMI. OKE climbed out of the bottom 5, replaced by PAGP.

Same story in Canada, underperforming, high-beta names rallied. IPL and Keyera (OTC:KEYUF) were both up 20%. Enbridge (NYSE:ENB) was the only name not to finish up double digits this week. 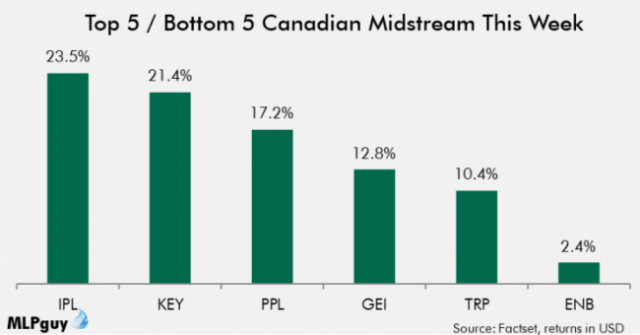 Inter Pipeline (OTCPK:IPPLF) went from worst last week to first this week. Keyera repeated near the top of the group, while ENB repeated near the bottom of the group. On the YTD leaderboard, TRP‘s propensity to trade up in good times and not down as much in bad times has it well ahead of any midstream stock in the universe in USD terms. ENB is in second place, but well behind after this week’s divergence.

News of the (Midstream) World

It was a very light news week. PAA’s 50% cut was basically it for news. Things were so light, I put two credit facility increases in the news. Expect further distribution announcements in the next week, with CEQP, WES and NS most notable on the hot seat names. No big M&A… yet.