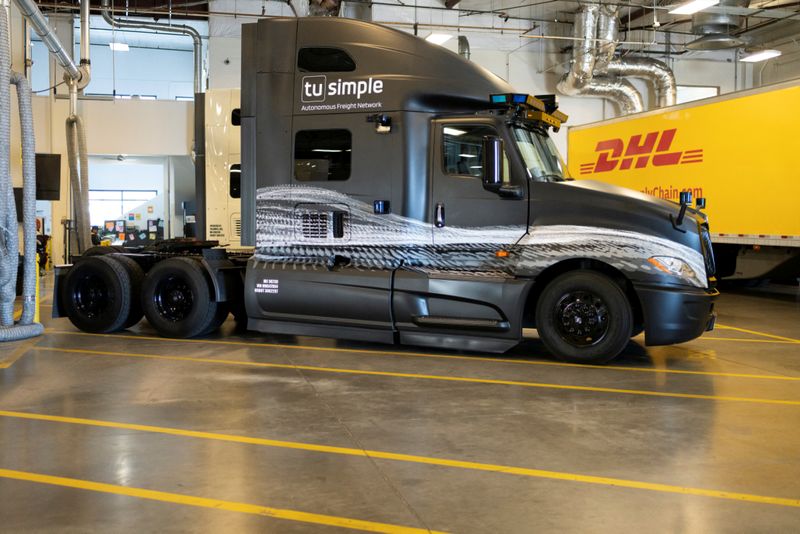 TUCSON, Ariz. (Reuters) – U.S. self-driving truck companies have a golden opportunity in the form of a nationwide driver shortage, but their robot drivers still are not ready and neither are their biggest potential customers.

The uncertainties surrounding autonomous trucking come at a critical time for the U.S. trucking industry, which faces a record shortage of 80,000 drivers as demand for online shopping and rapid delivery times is straining supply chains.

Private investors, who have so far poured nearly $9 billion into U.S. AV trucking companies according to data from Pitchbook, are hoping that self-driving trucks eventually catch on. Among the companies developing the technology are TuSimple Holdings Inc, Aurora Innovation Inc, Embark Technology Inc and Alphabet (NASDAQ:) Inc’s Waymo.

But large logistics companies, who represent the tech startups’ coveted future customers, are in no rush to sign big contracts. They continue to test the technology of multiple providers in limited partnerships.

“Everybody is at a point where they’re hedging their bets,” said Eric Fuller, the Chief Executive of US Xpress Enterprises (NYSE:) Inc, a carrier and trucking brokerage that manages 6,000 of its own tractors.

The company has announced partnerships with TuSimple and Aurora. Fuller, who also sits on TuSimple’s advisory board, said US Xpress was working with all the other AV companies, but had yet to announce more partnerships.

The companies say they have developed technology that can safely pilot a 33,000 pound (15,000 kg) truck down a busy highway and are pushing toward commercial launches.

They provide the sensors and software, and some have partnered with truck manufacturers to incorporate their technology at the assembly line, but all rely on large logistics companies to pay for their offering.

The U.S. Southwest, primarily Texas and Arizona, where weather and regulations are favorable, has emerged as the testing ground for heavy-duty autonomous vehicle (AV) companies.

But logistics giants also say they are still in the early stages of exploring the technology and are waiting to see which startups have the team, capital and network to survive and prove self-driving to be feasible on a large scale.

While much attention has been focused on self-driving taxis, industry experts increasingly bet on driverless trucks to be the first autonomous vehicles to generate meaningful revenue due to the less complex driving environment in which they operate.

Making a meaningful dent in the U.S. market of 2.3 million trucks will take time, however, and industry experts project no more than a few hundred-thousand autonomous trucks over the next decade.

Human drivers will prefer to spend more time on shorter, complex routes near their homes – routes that are still too difficult for self-driving technology.

Pitchbook analysts expect the global AV trucking market to balloon from around $530 million in 2023 to $167 billion in 2035.

“There’s still opportunity for more players. We’re not at a point where we’re shaking things out,” Jim Monkmeyer, president for transportation at DHL Supply Chain, said during a February visit to TuSimple’s testing facility in Tucson, Arizona.

DHL Supply Chain, which operates some 1,500 trucks and manages around $3 billion of annual North American freight spend, has so far partnered with TuSimple and Embark and put in reservations for future trucks with both companies. Those orders are slated to be fulfilled in 2024.

Monkmeyer said DHL had contracted with multiple providers to reduce its risks, but added that placing truck reservations early was crucial in order to be among the first to explore the new technology.

Monkmeyer and his logistics colleagues say self-driving trucks offer the potential to increase freight capacity and reduce cost, with robots, unlike humans, not subject to a mandatory 11-hour daily driving limit.

But the economics pan out only once the driver is out of the cabin.

So far, only TuSimple has removed its safety drivers in a handful of night-time trial runs along an 80-mile (130 km) stretch of highway between Tucson and Phoenix, Arizona.

The company is planning to present per-mile cost calculations in the next few months, Cheng Lu, TuSimple’s former CEO, said in late February, just days before the company replaced him in a surprise move.

“Your cost has to either be lower than what today’s costs are, or there is a clear line of sight to be lower,” said Lu, who now serves as an adviser to the new CEO.

Drivers account for more than 40% of per-mile costs, according to data by the American Transportation Research Institute.

Autonomous driving could halve driver costs, with the companies planning to charge between 35 and 45 cents in per-mile subscription fees, according to two industry experts.

But the companies, three of them publicly listed, are far from generating meaningful revenue, let alone profit. Embark recorded a 2021 net loss of $124 million, TuSimple had a loss of $411 million and Aurora lost $755 million.

For the logistics partners, access to sufficient capital is crucial when determining whom to partner with, DHL’s Monkmeyer and US Xpress’ Fuller said.

But the companies also confront other real-world hurdles as they try to release their technology on a larger scale.

Ryder, which operates nearly 240,000 trucks and around 800 U.S. maintenance locations, has partnered with TuSimple, Waymo and Embark to explore how self-driving trucks would fit into its network.

The logistics company wants to understand how to service the host of lidar, radar and camera sensors and whether trucks operating around the clock require different maintenance schedules.

“I can’t just run an autonomous business in the Southwest and Southeast, you have to figure out how to get to the Northeast,” she said.