LiveRamp’s (NYSE:RAMP) stock was very strong heading into a somewhat bullish Q2 earnings report before plunging ~20% on weak Q3 guidance. Yet, the stock still appears over-valued as compared to its demonstrated growth rate while facing a potential headwind due to changes in Apple’s (NASDAQ:AAPL) iOS that may obviate the need for RAMP’s ATS platform. But the company is cash flush and has time to figure out how to grow faster. The question is, can it?

As I reported on my first article on RAMP, the company’s Authenticated Traffic Solution (“ATS”) tool was designed to define the privacy-safe future of advertising technology on the open web in a cookieless world. Basically, RAMP replaces third-party cookies with an identity link (“IDL”) built on top of personally identifiable information (primarily email addresses). Digital publishers that participate in LiveRamp’s ATS platform embed AdTech programming on their site, and with that, LiveRamp can decipher who a user is from their IDL. This enables precise advertising while protecting the privacy of the user. ATS requires participation from digital publishers, email-based logged-in events on the ATS network, and an opt-in consent from users. See RAMP: Stock Up On Securely Connecting In A Cookieless World for more details on the platform and links to more sources of information.

The functionality of RAMP’s ATS platform is important, considering popular web browsers like Apple’s Safari and Firefox already block third-party cookies by default.​ Google (NASDAQ:GOOG) (NASDAQ:GOOGL) has also announced that it will end support for third-party cookies for its Chrome browser within two years in order to “fundamentally enhance privacy”. But note GOOG’s “two-year” window speaks volumes about the priority it places on that initiative and the impact it could potentially have on its AdTech revenue.

RAMP’s Q2 EPS report was released on Monday, Nov. 9th, and although non-GAAP earnings were only $0.03/share, that was apparently enough for a $0.10 beat according to consensus expectations, which obviously were quite low. Highlights from the report:

Revenue growth of only 16% wasn’t particularly impressive, considering the company’s sky-high valuation: it has a $4.16 billion market cap and a Fwd P/E of 612.

Considering the company’s platform is a SaaS-based model, subscription revenue being up 19% yoy and now composing 82% of total revenue would have been more impressive if overall revenue growth had been higher. Likewise, gross margin of 67% was roughly in line for what is expected from a SaaS model, but an operating loss of $27 million and a GAAP loss of $0.36/share still point to the need to grow revenue at a faster pace in order to swing to substantial profitability.

RAMP generated $6 million of cash during the quarter as compared to a net cash burn of $29 million in Q2FY19. The company has no debt and had cash and cash equivalents of $651 million at quarter end – that equates to an estimated $9.86/share based on 66,010,000 average diluted shares.

As a result of the strong balance sheet and a swing to cash generation, LiveRamp announced an extension of its share repurchase program through December 31, 2022. Under the existing buyback program, RAMP had ~$326 million remaining at the end of the quarter. Based on the current share price of $62.16, and all else remaining equal, that equates to an estimated 5.2 million shares, or roughly 8% of the outstanding share count.

While I was bullish on the company when I submitted my last article on RAMP, shortly after publication of the article, I became aware that Apple announced a change in its iOS, which caused me to change my outlook. I left a comment to the article reporting that I had exited my position.

Beginning with iOS-14, Apple will explicitly require all apps to support Apple’s ID for Advertisers (“IDFA”). Each iPhone has a unique IDFA that can function very much like cookies do in that the IDFA can be used to store user data and deliver advertising targeted to that user without revealing the user’s personal information. With the change to iOS, Apple will require all apps to ask for user opt-in permission to use its IDFA-enhanced privacy protection. I am not an AdTech expert, but for investors wanting to dig into the details, consider reading Seeking Alpha contributor Beth Kindig’s excellent article Advertising Stocks Face New, Major Challenges With iOS-14.

The change to iOS was expected to go into effect in September, but after blow-back from partners, Apple announced it will postpone the change until 2021. In August, Seeking Alpha reported that Facebook (NASDAQ:FB) said Apple’s changes could cut revenue for third-party publishers in its Audience Network by 50% or more.

I am still trying to ascertain if RAMP’s ATS platform could profitably co-exist and thrive in an “IDFA world” as Apple’s privacy solution may obviate the need for (some) digital publishers to adopt ATS – at least as it pertains to the majority of Apple users. That said, iOS is only ~45% of the U.S. market and even less of the international market: 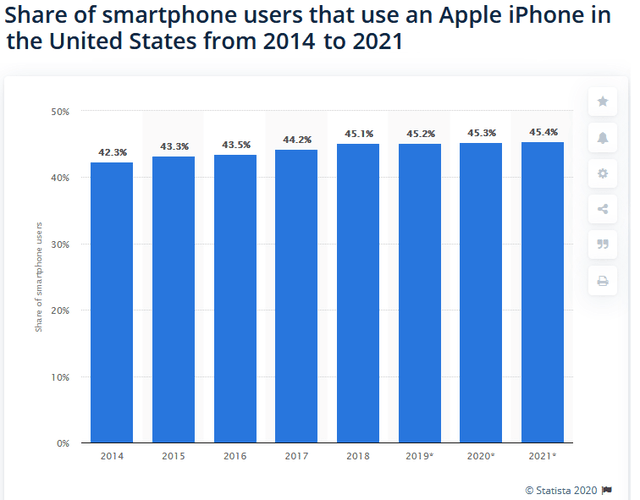 But one has to wonder if Apple’s IDFA development didn’t have something to do with RAMP’s forward guidance for Q3:

The company also expects to have $90 million in stock-based compensation for full-year 2021. Note that is only about 10% below the company’s total revenue in Q2.

On the Q2 conference call, the first analyst question was about the competitive environment and Trade Desk (NASDAQ:TTD) and unified ID 2.0. In response, RAMP CEO Scott Howe replied:

… in terms of identifiers, I mean there are literally, as you know, other than 1,000s of different identifiers that exist in the marketplace, many of them proprietary at clients or publishers. Our goal from the get go and embedded in the design of ATS was to be the Rosetta Stone, the translation layer that would tie all of the different identifiers together and allow anyone and everyone who’s ethical in the industry to operate seamlessly and efficiently across all of those identifiers. Again, ATS from its inception, was designed to be neutral and interoperable. We think the Trade Desk deal is — it’s not a surprise to us. We always knew from the get go that they were an important partner, an important destination for our clients. And so of course, we would be interoperable with them. We love the fact that different folks are out there talking about identity in the industry, because it’s raising awareness of the need for the entire industry to move away from third party cookies.

And quite frankly, as I think about how do we knit ourselves into the permanent fabric of the ecosystem and really take advantage of the opportunity before us, it’s no longer about simply the product. The product works … What we now need to do is raise awareness of everyone in the industry that it’s time to shift to something better. And some people may still mistakenly believe that Google isn’t going to follow through on deprecating third party cookies. We don’t believe that to be true. And even if that did happen, we know from the results I shared the day that our solution is better for the industry at all who embrace ATS.

We think we’re at critical scale and that’s important. I talked about 90% alignment to kind of the addressable US market, that’s really important to advertisers. I talked about the yield improvements publishers are getting, that’s critical. This simply works better when it’s time for the industry to make the switch.

The point of the quote (I apologize for the length, but it was important to get the full context of Howe’s remarks) is that RAMP’s SafeHaven/ATS platform was designed from the beginning to interoperate with all identifier schemes that move away from third party cookies and toward a more privacy-enhanced future. That is, the ATS platform will easily interoperate with Apple’s IDFA system (whether a user opt’d-in, or didn’t opt-in), but the better question is, what will that do to overall demand for RAMP’s ATS platform?

Meanwhile, investors are probably wondering why RAMP’s revenue isn’t growing at a faster rate. Q3 revenue is expected to be up only 11% yoy, which is a deceleration of Q2’s revenue growth (16%). In a COVID-19 world where online sales have skyrocketed, and heading into the holiday shopping season, one would have thought RAMP’s revenue would be growing faster than in the low teens if its SafeHaven/ATS platform was really catching on. Is the pending Apple iOS-14 change acting as a headwind for RAMP?

As I mentioned previously, RAMP currently has a $4.16 billion market cap and a Fwd P/E of 612. While TTM revenue of $412.0 million is roughly double RAMP’s 2018 revenue, note it’s down more than 50% from the company’s 2016 full-year revenue. But that does not mean much, considering the company’s future is largely built on the relatively new SafeHaven/ATS platform.

With a Fwd P/E of 612, apparently, the consensus is that earnings won’t grow much in the coming year. That might be okay if the company was heavily investing in growth and demonstrating that growth. But such a high Fwd P/E, when revenue growth is only in the low teens, appears to be problematic.

At this point, I honestly don’t know how big a headwind Apple’s pending change to iOS – or other evolving identifier solutions – could pose to RAMP’s ATS platform. What I do know is that revenue doesn’t seem to be growing fast enough to support the valuation level, considering the company is still not delivering a positive operating margin. While the company has no debt and a large cash position, it’s not clear to me the stock buyback plan – at the company’s current valuation – is a wise use of cash. I would avoid the shares until RAMP can demonstrate significantly higher revenue growth and consistent profits. The next few quarters will be key in terms of ATS platform adoption.

Disclosure: I am/we are long GOOG. I wrote this article myself, and it expresses my own opinions. I am not receiving compensation for it (other than from Seeking Alpha). I have no business relationship with any company whose stock is mentioned in this article.

Investors’ appetite for risk exposure grew stronger this week. Despite Covid accelerating across key economies, vaccine headlines have underpinned bullish momentum. At the same time, lingering worries over a contested U.S. election appear to be […]