After easily beating the third-quarter EPS and revenue estimates, the stock price of Linde plc (LIN) attempted to reclaim a 52-week high. Was it justified? Yes, but only to some extent.

I have been covering Linde since October 2019. My previous rating was neutral, as the rally looked overheated. Since the previous note published in July, Linde has surged by over 30%, partly because of the Q3 earnings surprise, and also thanks to the news on Pfizer/BioNTech coronavirus vaccine success that have recently catalyzed a massive increase in stock prices. Before that, in September and October, LIN had been slowly retreating back to the early July levels.

Is it worth buying the stock for the long term now? Most likely not. Sure, there are some caveats, as usual. Let me elaborate on that and also present the analysis of its Q3 results.

Linde’s exposure to hydrogen and oxygen shore up investor confidence

Before we proceed to the analysis of the figures LIN published and the forces that actually defined its Q3 performance (and will likely define for the rest of tumultuous 2020), let me shortly discuss a few obvious catalysts that have made the stock so expensive (it is trading at ~17.4x EV/EBITDA) this year.

First, Linde is somewhat a story stock. What are the staples of this story? Oxygen, hydrogen, and myriads of smaller factors that are intimately intertwined with the demand for these gases both in the short and the long term. First and foremost, ESG factors draw more investor attention and impact portfolios. Decarbonization, the irreversible decline of fossil fuels, etc., have been hotly debatable topics, as my dear readers are definitely aware. In this environment, many see hydrogen as a game-changing fuel.

The looming H2 economy frets investors, so, they try to prepare their portfolios for it. At first glance, shares of industrial gas companies are simultaneously the simplest and the aptest option. After the merger of Praxair and Linde AG, Linde plc became the industry leader (slide 4), together with Air Products and Chemicals (APD) and L’Air Liquide S.A. (OTCPK:AIQUF), so, there is no coincidence that it does attract massive attention from heavyweight market participants, which positively impacts the share price.

At the same time, amid the coronavirus pandemic, medical oxygen became precious basic material. And the stock prices of companies in the oxygen supply chain, from, let us say, upstream players like LIN and industrial machinery companies like Chart Industries (GTLS), to downstream players like Koninklijke Philips (PHG) that manufactures ventilators, staged a vertiginous recovery from the March sell-off and even touched the all-time highs (e.g., LIN and APD).

So, while the market does pay attention to financial performance (namely, the EPS trajectory), it is worth remembering that the green economy trends and the short-term demand for medical oxygen also influence Linde’s capital appreciation.

As the macro factors had improved meaningfully since Q2, Linde’s Q3 revenues were down by only ~2%. Also, as the visibility improved, Linde shared an upbeat outlook, expecting the Q4 adjusted EPS between $2.11 and $2.16, which implies a 13%-15% growth ex-FX (slide 5).

The Americas, the region Linde heavily relies on, appeared to be the weakest in the third quarter, as revenues there fell by 5%. The demand in Europe, the Middle East, and Africa was also soft, as Linde’s sales in the region dropped by 2%. However, sales materially improved sequentially: the Americas’ Q3 sales were 9% higher than in Q2, mostly due to steeply rebounded volumes, while the EMEA’s revenues rose 12%, principally thanks to the combination of higher volumes and the currency tailwinds.

Uncoincidentally, the Asia Pacific outperformed all other regions due to the rapid economic growth in China, which has been keeping the coronavirus at bay since spring. Thanks to high demand from the electronics and chemicals & refinery end-markets, sales were up 15% sequentially and 2% QoQ.

However, there was another but less potent stimulus (as the healthcare end-market is responsible for only 5% of the APAC sales, slide 8), namely the high demand for medical oxygen in India, as the country became a coronavirus hotspot in summer. Will demand for oxygen remain elevated in India in November, for example? It is a perplexing question, but the recent news suggests the worst is likely behind. For example, in Maharashtra, a state with a population of 114.2 million (as of 2012), in October, the demand dropped by approximately 34%, as the number of Covid-19 infections fell materially. By and large, it seems the country has already passed a peak in September, and the bumper increase in the demand for O2 is, I hope, not to be repeated. 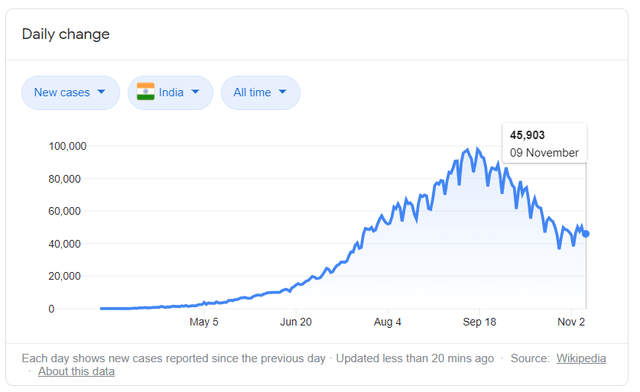 Among the end-markets, Healthcare was an obvious outperformer. Its sales not only improved sequentially, going up by 2% but also were 5% higher than in 3Q19. The principal driver here is obvious. Meanwhile, Electronics was the company’s second most successful end-market with a 4% revenue growth QoQ, thanks to robust demand from the memory and hardware sub-end-markets. Linde did not clarify which semiconductor customers largely contributed to higher sales, but given one of its key South Korean clients is Samsung Electronics (OTC:SSNLF), I cautiously reckon orders from this company were among essential drivers.

Other end-markets fared worse, namely Food & Beverage, Chemicals & Refining, Metals, and Other, but the silver lining is that all of them improved sequentially.

Margins, cash flows, earnings quality: All these can make LIN a Buy for many investors

But while sales had still been weaker than in pre-crisis 2019, Linde did a great job improving margins and cash flows. For example, its operating margin touched 22.1%, while in 3Q19, it was 19.8% (slide 3). Operating cash flow rose 1% QoQ and 7% sequentially. As capital expenditures (principally project capex) were radically cut, the company generated a massive cash flow surplus, which exceeded net income both in 9M and Q3: $2.1 billion and $1.1 billion, respectively, vs. $1.73 billion and $700 million in the net income. In fact, it will not be an exaggeration to say that LIN is an FCF champion, which makes the stock one of the optimal choices for investors who seek stable, predictable, and (hopefully) growing dividend income. The flip side is its ~1.5% yield, and even considering the DPS might be increased in the future, it is still too low for my taste.

Linde’s third quarter was successful in many senses, and, yes, traders had strong reasons for the warm response to the results and also to the vaccine success that reduces the risk of the W-shaped economic recovery and fortifies the bull case for the global share market.

However, valuation remains my primary concern. At the moment, Linde’s Value Grade is D-. Should the industrial gases heavyweight trade at a discount or in-line with the Materials sector? Obviously not, especially considering its outstanding profitability and exposure to the hydrogen industry the market has high hopes for. But the essential fact not to be forgotten is that Linde heavily relies on refining as one of its primary end-markets: For example, in Q3, chemicals & refining were responsible for 19% of revenues, which is equal to the contribution from manufacturing and only 1% lower than the share of the healthcare. So, in the long term, there is a significant risk that while the rise of hydrogen FCEV will bolster demand for Linde’s hydrogen, the decline of traditional refining due to sapping demand for gasoline and diesel amid the green trends will take its toll on the company’s top line.

To sum up, I maintain a neutral rating.

Autohome (ATHM) trades at 13x-14x EBITDA, with 41% net income margin, cash, and no debt. I as well as many other analysts opine that the stock price could increase more than 20% in the twelve […]

© Reuters. The EU flag is reflected in a drop on a syringe needle in this illustration By Francesco Guarascio BRUSSELS (Reuters) – The European Union is planning tough measures to boost its access to […]