USD/CAD trades to a fresh monthly low (1.3225) ahead of the update to Canada’s Consumer Price Index (CPI), and the exchange rate may continue to give back the advance from the start of the year as the Relative Strength Index (RSI) offers a bearish signal.

USD/CAD struggles to retain the advance from the start of the year following the failed attempt to test the October high (1.3348), and the exchange rate may continue to track the range from the fourth quarter of 2019 as the Federal Reserve as well as the Bank of Canada (BoC) endorse a wait-and-see approach for monetary policy.

The update to Canada’s CPI is likely to keep the BoC on the sideline as the headline reading for inflation is expected to uptick to 2.3% from 2.2% per annum in December, and signs of sticky price growth may encourage the BoC to tame speculation for lower interest rates as “the Bank expects inflation will stay around the 2 percent target over the projection horizon.”

In turn, the BoC may merely attempt to buy time at the next meeting on March 4, and more of the same from Governor Stephen Poloz and Co. may heighten the appeal of the Canadian Dollar as the central bank remains reluctant to reverse the rate hikes from 2018. 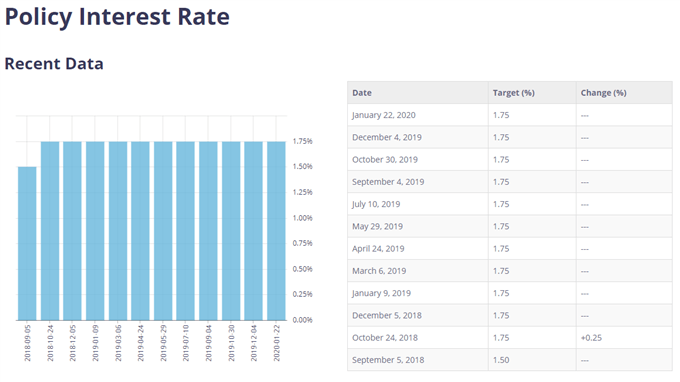 However, the BoC may change its tune over the coming months as the “Governing Council will be watching closely to see if the recent slowdown in growth is more persistent than forecast,” and it remains to be seen if the central bank will alter the forward guidance when it updates the Monetary Policy Report (MPR) in April as “data for Canada indicate that growth in the near term will be weaker, and the output gap wider, than the Bank projected in October.”

Nevertheless, Governor Polozmay stick to the status quo ahead of his departure in June as “the global economy is showing signs of stabilization,” and USD/CAD may continue to track the range from the fourth quarter of 2019 as the advance from the start of the year fails to produce a test of the October high (1.3348).

As a result, USD/CAD may continue to give back the advance from the January low (1.2957), with the Relative Strength Index (RSI) offering a bearish signal as the oscillator falls back from overbought territory and snaps the bullish formation from the start of the year.

killerbayer/iStock Editorial via Getty Images Investment Thesis The A1 Telekom Austria Group (OTCPK:TKAGY), or Telekom Austria, is one of the largest Austrian and Central East European telecom service and equipment provider. Having most of its […]