The oil market will likely weaken in the fall (emphasis added):

In its closely-scrutinized monthly oil-market report, the IEA forecast a sharper shrinking in global demand for 2020 than in its last report, upping its contraction forecast for the second straight month. The agency now expects global demand to fall by 8.4 million barrels this year, a contraction of 300,000 barrels more from last month’s report.

That echoed a similar move Monday by the Organization of the Petroleum Exporting Countries, which deepened its own contraction forecast while also altering a number of other forecasts to signal growing pessimism about the global economic recovery and its impact on energy demand.

Oil prices were stuck in the lower $40s during the summer. They have now retreated to the upper $30s. This has negative ramifications for the (XLE) which has underperformed for most of the rebound.

Investor sentiment in Germany rose unexpectedly in September, the ZEW economic research institute said on Tuesday, signalling confidence in a recovery from the coronavirus crisis despite headwinds from stalled Brexit talks and rising new infections.

The survey of investors’ economic sentiment rose to 77.4 from 71.5 points the previous month, confounding a Reuters poll forecast for a fall to 69.8.

“The ZEW Indicator has increased again, signalling that the experts continue to expect a noticeable recovery of the German economy,” said ZEW President Achim Wambach.

The optimism is reflected in the German stock market: 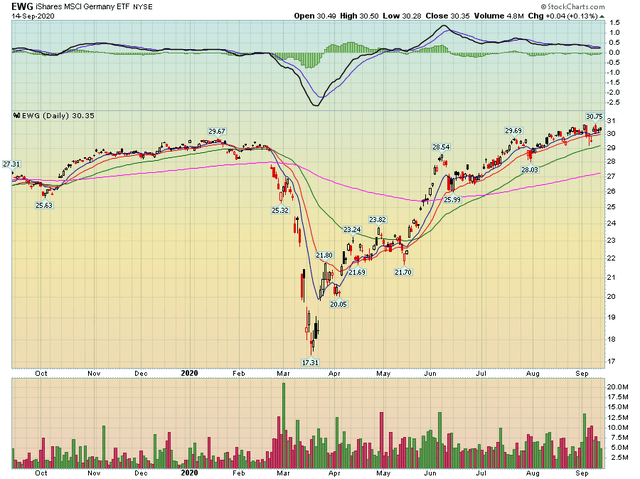 There’s been an increasing amount of commentary on the FANG stocks. Regardless of the position taken, there can be no denying that this small group of tech stocks have two things in common: 1.) Their combined market capitalization means they have a disproportionate impact on the market, and 2.) They are perfectly positioned to continue growing in the pandemic economy. Here are their charts for the last six months:

I’ve added Microsoft and Amazon to round out the list. All are still generally in uptrends. However, all have recently dipped and several have moved below their respective 50-day EMAs. While this is likely nothing more than short-term profit-taking, it also explains why the markets have softened during the last few weeks.

As usual, the QQQ led the market higher. Two larger-cap indexes were up modestly but smaller-caps and treasuries only had fractional movement.

The reason for the QQQ rally was the strong performance of two ETFs: technology and communication services. For the first time in awhile real estate was in the top three. Three sectors were down.

Since tomorrow is Fed day, the lack of movement is understandable — no one wants to be caught flat-footed in case there is a surprise announcement. That thought helps to place today’s chart in perspective:

Prices gapped higher at the open and traded sideways until right after lunch when they started to decline. They hit a session low right after 3 before rebounding. 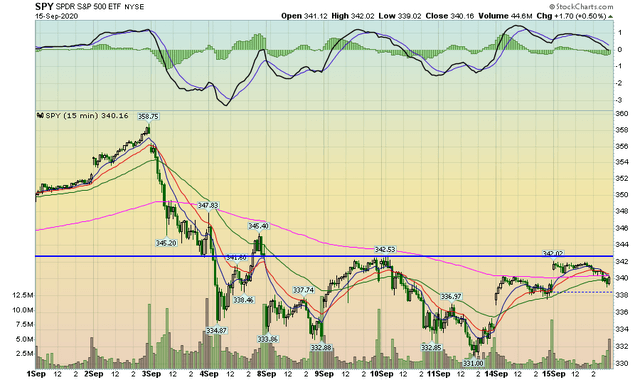 While today’s gap higher helped prices move above the 200-minute EMA on the 14-day chart, the afternoon sell-off sent prices below that key technical line. Prices are still below the 342.50 level (the horizontal blue line). 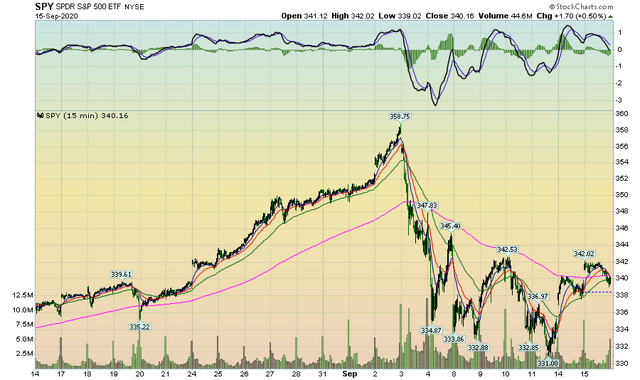 The same thing happened on the 30-day chart.

However, it’s worth noting the IWM has been rallying over the last few days and closed above its 200-day EMA in several time frames. 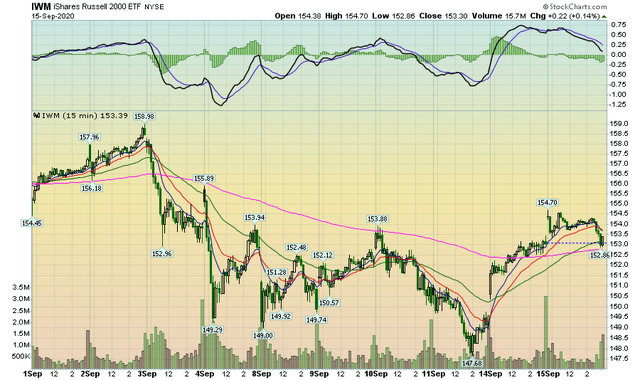 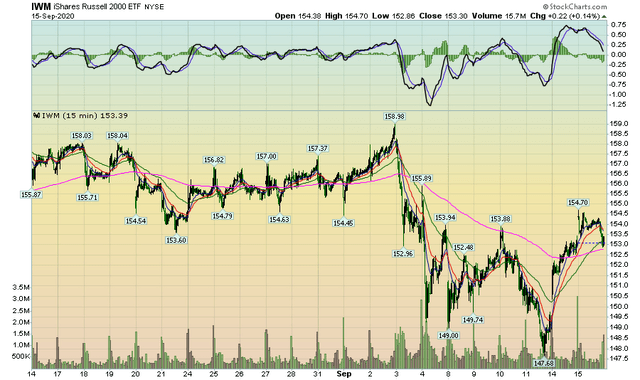 Don’t expect much to happen tomorrow until the Fed announcement. After that, anything goes.