Fundamental Forecast for the Euro: Neutral

See our long-term forecasts for the Euro and other major currencies with the DailyFX Trading Guides.

The Euro finished last week broadly higher, largely thanks to the ongoing deterioration by the US Dollar. EURUSD was the best performing EUR-cross, adding 1.42% around the June Fed meeting. Elsewhere, with the EU-Swiss stock exchange accessbattle ongoing, repatriation flows are keeping the Swiss Franc afloat despite a relaxation in demand for the safe haven currencies; EURCHF was the worst performing EUR-cross, losing -0.86% last week.

Otherwise, the performances by various EUR-crosses were middling at best: EURGBP continued its gentle rise, up by 0.26% as the Tory leadership election contest reached its final stage; and EURJPY was able to add 0.28% amid gains by global equity markets.

The upcoming economic calendar for the last week of June is rather light, particularly at the front end; there are no ‘high’ rated events before Thursday. While the June German IFO survey is due on Monday and the July German GfK consumer confidence report due on Wednesday, neither are likely to leave a significant impact on Euro price action.

On Thursday, the calendar will truly come into focus for the Euro in the form of the preliminary June German inflation report. The German consumer price index is due in at 0.2% (m/m) and 1.4% (y/y), the same price pressures seen in May. Stability in inflation data from the Eurozone’s largest economy should serve as an appetizer for the main course of Eurozone economic data this week, the June Eurozone inflation report on Friday.

The preliminary June Eurozone consumer price index on Friday is due on hold at 1.2% (y/y), while the core reading (ex-energy, food, alcohol & tobacco) is set to edge higher to 0.9% from 0.8% (y/y). The floor in inflation readings is coming at a time when European Central Bank President Mario Draghi has started to talk up the possibility of increasing accommodative policy measures over the coming months. 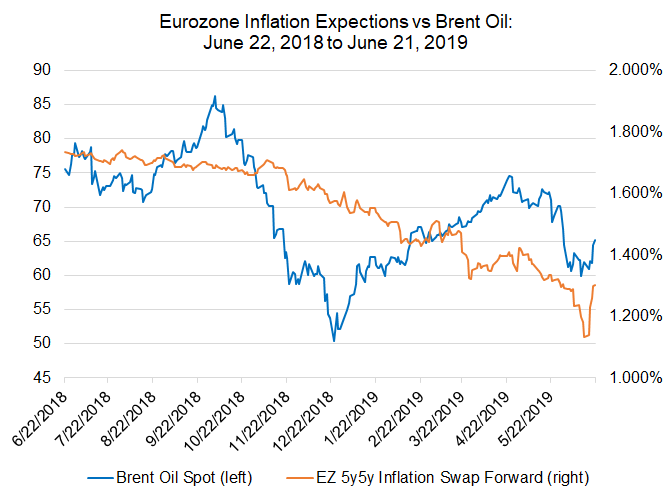 Eurozone Economic Data Has Been Improving

An objective look at European economic data shows that conditions have improved, relatively speaking, over the past few weeks. In recent days we’ve seen the preliminary June French, German, and Eurozone PMI readings beat expectations almost uniformly: only one figure, the preliminary June Eurozone manufacturing PMI, missed forecasts; the Eurozone composite PMI improved to 52.1 from 51.8, beating the expected reading of 52. Accordingly, the Citi Economic Surprise Index for the Eurozone, a gauge of economic data momentum, increased to -1.3 by the end of last week; one month ago, it was at -21.7; three months ago, it was at -60.

EURGBP Stepping Out of the Spotlight

With the Tory leadership election down to the final two contestants, the 160,000 Tory party members will now vote over the coming month, culminating in results due in around July 22. Unless there is a surprise development, Boris Johnson is the clear favorite to become the next Tory party leader, and GBP-crosses already have this discounted into prices. Traders seeking out opportunities for EURGBP around the latest Brexit developments may be disappointed over the coming weeks.

As is fairly common, the last week of the month carries only a smattering of ‘high’ rated data releases that will leave a footprint beyond price action on the day of their publications. But with the US-China trade war proving to becoming a bigger and bigger threat to economies around the globe, any opportunity that traders have to glean new perspective from policymakers has a chance to be disruptive to FX markets.

On Tuesday, Fed Chair Jerome Powell will give remarks on the US economic outlook and Fed policy, which will draw interest for EURUSD given the dovish tone deployed at the June Fed meeting just last week. Staying focused on the US, the preliminary May durable goods orders report is due on Wednesday and the final Q1’19 US GDP report will be released on Thursday.

Elsewhere, the Reserve Bank of New Zealand will meet and keep its main rate on hold, but expectations are pointing to a high likelihood of more dovish policy action later this year; EURNZD could see additional volatility as rate expectations are repriced.

Finally, at the end of the week, the greatly anticipated G20 summit in Osaka, Japan will begin, featuring a summit between US President Donald Trump and Chinese president Xi Jingping. That a potential US-China trade deal could emerge should keep traders on edge over the coming days, as preparatory work by diplomats and trade negotiators could result in leaks and rumors in the run-up to the meeting in Japan. 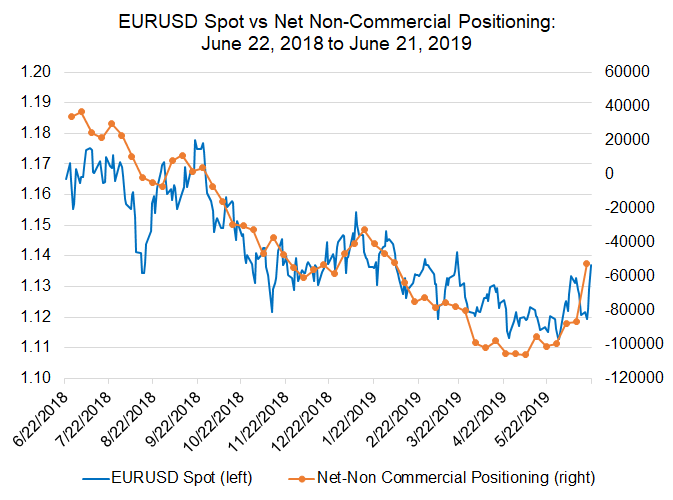 Finally, looking at positioning, according to the CFTC’s COT for the week ended June 18, speculators dramatically decreased their net-short Euro positions from 86.8K to52.3K contracts, a -39.7% drop in net-short positioning. The futures market is now the least net-short is has been since February. It is worth noting that the most recent COT’s reporting period did not cover the June Fed meeting, which occurred on June 19; there will likely be another big shift in positioning in the next iteration of the COT report.

Whether you are a new or experienced trader, DailyFX has multiple resources available to help you: an indicator for monitoring trader sentiment; quarterly trading forecasts; analytical and educational webinars held daily; trading guides to help you improve trading performance, and even one for those who are new to FX trading.

Madmaxer Laughter is poison to fear.” – George R.R. Martin Today, we take a deeper look at a small financial services firm that has delivered solid revenue growth but is facing an increasingly difficult economic […]