In 11 out of the 18 categories of domestic equity funds, the majority of funds continued to underperform their benchmarks. For example, 67% of domestic equity funds lagged the S&P Composite 1500® during the one-year period ending June 30, 2020. Additionally, the majority of large-cap (63%) and multi-cap (65%) funds lagged their benchmarks. In contrast, mid-cap and small-cap active funds performed relatively better. Approximately 56% of mid-cap and 53% of small-cap active managers outperformed their benchmarks for the one-year period.

While one could argue that smaller-cap active management is an option, the same report also contains this table that shows the performance of various fund types over various time frames: 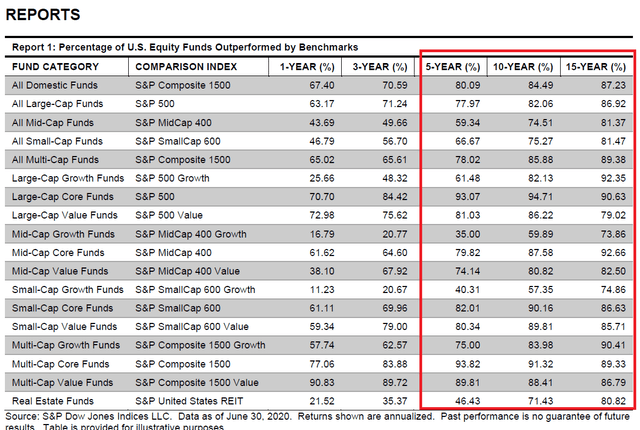 The 5, 10, and 15-year periods are highlighted to show that the longer the time period, the less likely active management will beat the averages.

But passive investing is also (potentially) facing a period of low returns. The 60/40 portfolio (60% stocks/40% bonds) has been an investing staple for decades (which is why I report on various returns based on different allocations weekly). But now managers are concerned this allocation is facing choppy waters based on long-term projections (as in years) of low equity market return. I’m dubious of any long-term market value prognostication; there is simply no way of knowing what’s going to happen by year-end, let alone in five years. This is the primary fault with active portfolio management. More importantly, the primary reason for using some level of stock/bond allocation is that these assets are somewhat negatively correlated as shown in this chart from the Portfolio Visualizer website:

The SPY and TLT continue to be negatively correlated over time which is a primary reason the two assets are combined in portfolios.

According to the latest PMI release from Markit Economics, the US economy is expanding:

Here’s the commentary from the report:

“US businesses reported a solid end to the third quarter, with demand growing at a steepeningrate to fuel a further recovery of output and employment.“The survey data therefore add to signs that the economy will have enjoyed a solid rebound in the third quarter after the second quarter slump

Overall, this is further confirmation that the economy has rebounded from the lockdown-caused lows.

All the equity indexes were lower; the only issue was the amount of the decline. The QQQ led the way lower, which is to be expected as it’s been the top-performing index for some time. After that, smaller-caps had the largest losses. The long end of the Treasury market was up fractionally.

Now the sector performance is taking on a more standard sell-off posture. Health care, staples, and utilities — the three defensive sectors — are the “best-performing.” The energy market — which is in terrible fundamental shape — had the largest losses.

This is a standard-issue down day, with prices moving from the Northwest to the Southeast and ending just slightly above the daily low. The 200-minute EMA acted as technical resistance starting in the late AM.

Yesterday, I noted that this looks like a correction and not the start of a bear market. The daily QQQ chart explains why: 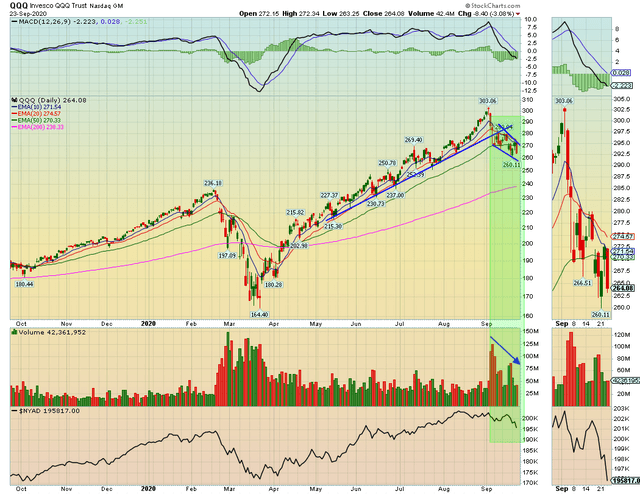 Prices are forming a pennant pattern, which occurs in an uptrend and is usually a continuation — not a reversal — pattern. Volume is decreasing, which is also standard for this situation.

The 3-month QQQ chart shows the pennant in better detail: 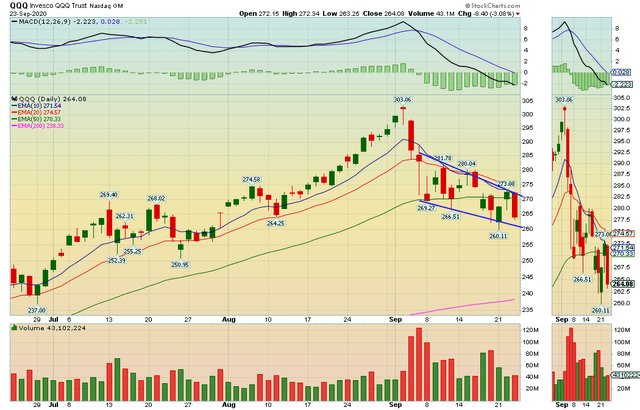 That is a classic pattern.

Let’s now look at a few charts that are key for whether or not this stays a correction or if this leads to a wave of stronger selling: 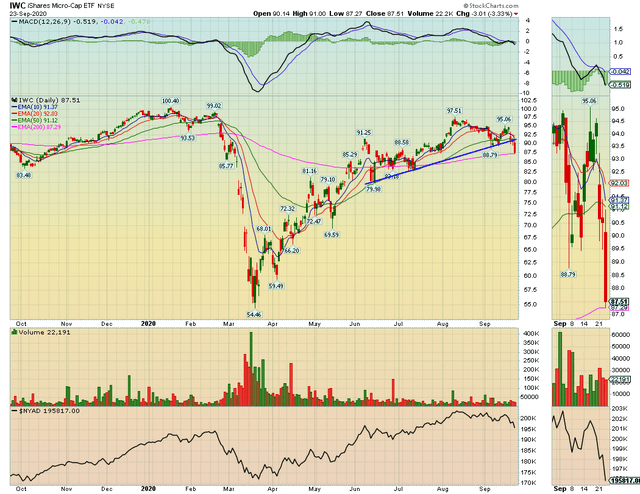 Micro-caps had a big down day; they printed a very large downward bar with a long body. The index is right at the 200-day EMA. 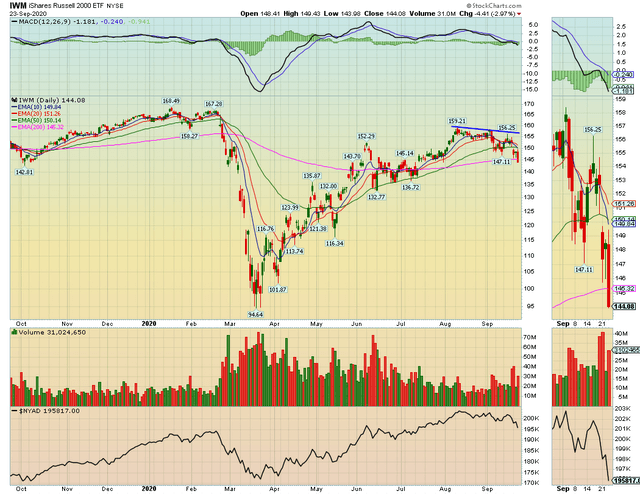 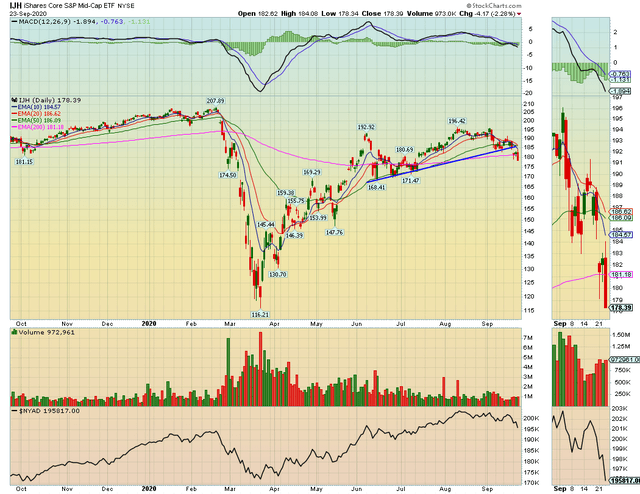 This leads to two questions:

At this point, we’ll need another trading day to answer.