We always need to be careful with economic numbers. What matters isn’t in fact what they are but the reason why they are what they are.

As an example, as we entered lockdown the purchasing managers indices seemed to be indicating that not all that much bad was happening. Which was odd as we could look out the window and see that lots bad was happening. It took some digging around in the explanations to work out why this was. The answer being the way they were constructed.

They’re really a series of correlations with the thing we’re interested in, economic growth. That’s fine, but correlations don’t always work out the same way. In the PMI case they registered an increase in delivery times as a market of increased growth. Fair enough in normal times, if everyone’s too busy to deliver on time then we probably are in a growth spurt. But when half the economy (I exaggerate) is closed because of a pandemic inspired lockdown it could be that rising delivery times are an indication of people being closed, not busy. As the compilers of the PMIs agreed after they’d thought about if for a bit.

They understated the slowdown because of this delivery time thing. And now, as lockdown is ending and delivery times are falling they’re – slightly at least – understating the recovery.

This isn’t about that at all. It’s just to use that as an example of the care we must take over economic statistics. They’re never just a number. We need to know why the number is as it is to decide about it. For example, ricing productivity is normally a good thing. At present it’s a bad.

Paul Krugman is on record as saying that “Productivity isn’t everything but in the long run it’s pretty much everything”. By which he means that labour productivity, over that long term, is really the only important measure of what living standards are going to be. Productivity here is being measured as value of output per hour of human labour put in. Which becomes obvious really, the greater the value being produced by each hour of labour then the greater the value that can be consumed from each hour of labour. Since our living standard is what we can consume it all ties together.

So, over time at least, we want labour productivity to increase for this is the same thing as stating that we’re all getting richer. Except this isn’t always true:

In normal times we’d be overjoyed with that increase in productivity. We’d regard it as very good news indeed for both the economy and profits – and thus stock prices.

(US labour productivity from Moody’s Analytics)

The things is this is not a good thing. Sure, it’s nice that productivity rose but why? Because lots of people are out of work.

This is going to sound a little political but it’s not – it’s just noting the same mistake. We’re often told that people in France, or Germany or wherever, are more productive than American workers. This is because – and take your pick of the political reasons put forward – American companies don’t invest but only pay out to shareholders, or because of paid childcare, or national health care, or cultural differences, or training and so on. All might indeed have their effects but one significant reason is that in the US we tend to have everyone employed. In Europe the least productive workers don’t have jobs at all. And our measurement of productivity is based only upon those in work, not the population as a whole.

Which is what has happened in the US. A lot of people are now out of work and as these things go it’s the least productive who have been fired first. So, the measured productivity of those still in work rises.

This is really just background for us, part of the general education. The same economic number – rising productivity – can be a good thing or a bad thing. As with rising delivery times. We need to know why a number is moving the way it is as well as how it’s moving.

The detailed point here being that we shouldn’t take the current rising productivity as being a positive spin for stock prices.

We’ve also recently had the JOLTs report and this shows the US labour market – slowly – returning to normal:

The number of job openings increased to 5.9 million on the last business day of June, the U.S. Bureau of Labor Statistics reported today. Hires decreased to 6.7 million in June, but was still the second highest level in the series history. The largest monthly increase in hires occurred in May 2020. Total separations increased to 4.8 million. Within separations, the quits rate rose to 1.9 percent while the layoffs and discharges rate was unchanged at 1.4 percent. 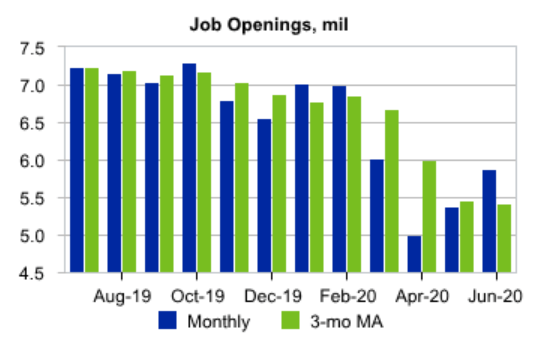 Rising job vacancies – although learly still well below the number of unemployed – is a good sign. But the one I always pay most attention to is “quits”. This is the number of people feeling confident enough to leave a job. If everyone is cowering in terror at the difficulty of gaining another one then no one does quit. A rising quits rate is an excellent sign of rising confidence in the jobs market.

We’re not there yet, we’re not back to normal. But things are moving in hte right direction.

As I continually explain I expect a V shaped recovery, relatively swift and getting us back close at least to where we were. I am actively looking for statistics – no, not claim about them, but actual numbers – which will disprove this thesis. I’m not finding them yet.

The market indices are about right for that relatively swift and V shaped recovery back to roughly where we were then carrying on in the normal manner from there. Finding numbers which disprove this would indicate a significant move downwards. Numbers which support the thesis only do not disprove it.

Our macroeconomic indicators are not giving us any clear investing plan at present. We’re stuck with having to do microeconomic investing, in specific companies and situations.