The anti-risk Japanese Yen was one of the best-performing major currencies on Thursday as fears about the coronavirus dented market sentiment in late European trade. The New Zealand Dollar also fared well following higher-than-expected local inflation data. This is as the Euro underperformed in the aftermath of the European Central Bank (ECB) monetary policy announcement.

USD/JPY and AUD/JPY fell as reports crossed the wires that Singapore confirmed its first case of the coronavirus that has been spreading from central China. Ahead of the Lunar New Year holiday, this has been increasing prospects that more people may stay home and thus dent revenue prospects. Fears were somewhat cooled after the World Health Organization said it would not declare an international virus alarm.

On Wall Street, the S&P 500 and Dow Jones ended the session on average little changed following downside gaps. Euro crosses such as EUR/USD and EUR/GBP declined despite rather uplifting commentary from ECB President Christine Lagarde. She said that some risks to the growth outlook are less pronounced with some signs of a moderate increase in underlying inflation.

Yet the central bank also announced that it would launch a review of their inflation policy which could take until the end of 2020. That likely further pushed back prospects of monetary tightening, thus sending Eurozone government bond yields to the downside. NZD/USD rallied as New Zealand CPI clocked in at 1.9% y/y in the fourth quarter versus 1.8% expected, cooling near-term RBNZ rate cut expectations.

USD/JPY has extended near-term losses after topping just under 110.29. Prices find themselves sitting on the lower boundary of a familiar psychological barrier at 109.49 – 109.72. The medium-term technical bias still seems to favor the upside ever since the pair pushed above the falling trend line from November. A Descent under this line would arguably shift the near-term technical outlook in favor to the downside.

What is the road ahead for JPY in the first quarter? 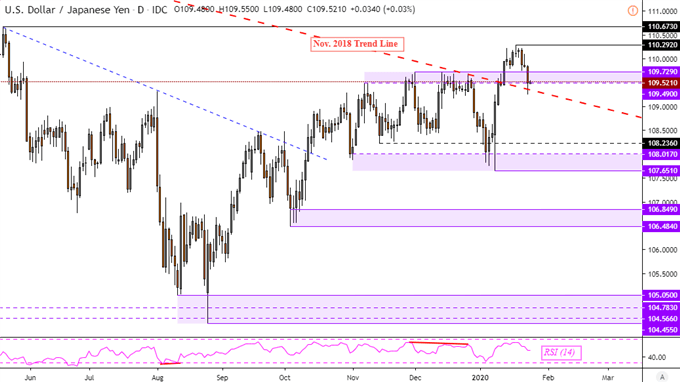