The anti-risk Japanese Yen traded relatively flat on Monday despite a couple of cautiously upbeat fundamental developments. The International Monetary Fund (IMF) released the latest World Economic Outlook update where it highlighted that risks to global activity are “less tilted to the downside”. Worldwide growth prospects were revised little lower however, down to +3.3% for 2020 from +3.4% prior.

This is as the sentiment-linked Australian Dollar and New Zealand Dollar brushed off what appeared to be deescalating EU-US trade tensions. French President Emmanuel Macron and his U.S. counterpart, Donald Trump, met and agreed on a “truce” regarding tariffs until the end of this year. The two nations have been exchanging threats ever since the former released digital tax plans on the latter.

The Euro aimed tepidly to the upside but ended the day little changed against the US Dollar. This is likely due to gains in the latter earlier in the session. Crude oil prices filled in an upside gap following temporary fears over supply disruption after unrest in Libya lead to a couple of shutdowns in major facilities. Wall Street was offline for the Martin Luther King Jr. Day holiday. That may help to explain some of the subdued FX volatility.

How can the IMF and EU-US trade war impact JPY?

The Yen may look past what may be another status quo Bank of Japan (BoJ) rate decision due at an unspecified time during Tuesday’s Asia Pacific trading session. The currency may be affixed to trends in sentiment instead where it could be vulnerable to losses. Regional benchmark stock indexes such as the Nikkei 225 or ASX 200 could see some cautious gains following the EU-US trade war de-escalation.

My majors-based Japanese Yen index, an average of its value against USD, AUD, GBP and EUR, has been seeing some positive RSI divergence. That shows fading downside momentum which can at times precede a turn lower. This is emerging around rising support from 2018 – red lines on the chart below. That may pave the way for another retest of near-term falling resistance from August – blue line.

What is the road ahead for JPY in the first quarter? 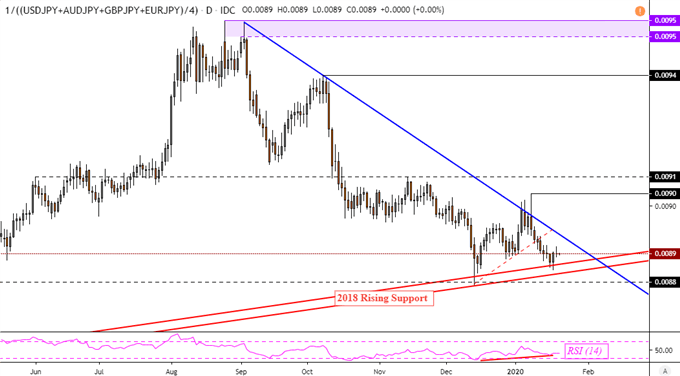