Fundamental Forecast for the US Dollar: Neutral

US Dollar Rates Week in Review

The US Dollar had a mostly positive week, gaining ground against all but two of its major counterparts. With the China coronavirus outbreak stoking fears over global trade and growth, the safe haven currencies tended to outperform, led by the Japanese Yen: USD/JPY fell by -0.79% over the week, the worst preforming USD-pair. Elsewhere, GBP/USD added 0.44%.

Gains for the US Dollar were modest elsewhere versus the other five major currencies. AUD/USD was the worst performer, losing -0.68%, while EUR/USD was close behind, dropping by -0.60%. With crude oil prices continuing their plunge, the Canadian Dollar proved weaker: USD/CAD gained 0.59% on the week.

US Economic Calendar Supersaturated in Last Week of January

The forex economic calendar is supersaturated during the last week of January, leaving the US Dollar (via the DXY Index) exposed to greater event-based volatility over the coming days. On Tuesday, we’ll see the December US durable goods orders and January US consumer confidence reports. On Wednesday, the December US advance goods trade balance will be released in the morning ahead of the January Fed meeting later that afternoon. 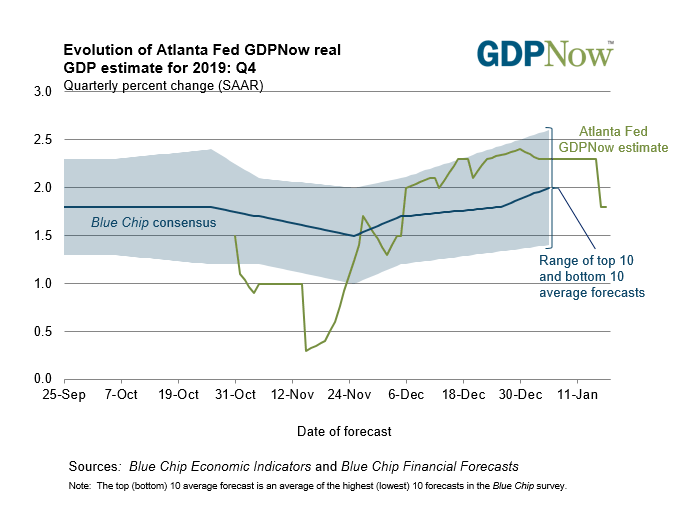 The initial Q4’19 US GDP report will be released on Thursday, January 30; the consensus forecast from Bloomberg News is looking for 2.2% annualized growth. Based on the data received thus far about Q4’19, the Atlanta Fed GDPNow forecast is looking for growth at 1.8% annualized. Q4’19 US GDP expectations have ranged between 0.3-2.4% since tracking began at the end of October.

US Inflation Expectations Weighed Down by Slumping Crude Oil Prices

The last major report of the week is on Friday, the December US PCE core report – the inflation report that the Federal Reserve uses in its policy forecasts. Energy markets have had a very volatile January, first marked by escalating US-Iranian geopolitical tensions, now weighed on by global growth concerns thanks to the coronavirus outbreak. Yet medium-term US inflation expectations have barely budged over the past few weeks, seemingly unbothered by the concerns that the oil markets share. 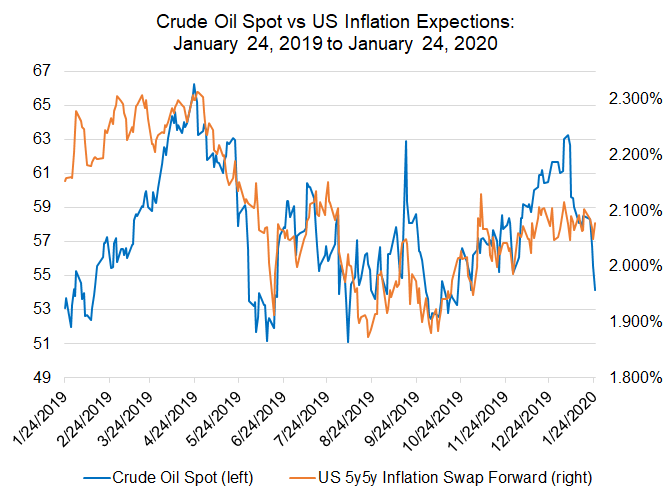 For all the volatility in crude oil prices – crude oil prices have fallen nearly -18% from their January high to low – medium-term US inflation expectations, as measured by the 5y5y inflation swap forwards, have been stable: they started the month at 2.068%, and they currently stand at 2.078%.

With US Treasury yields drifting lower in recent weeks, it should be no surprise that Federal Reserve interest rate expectations have become less indicative of policy inaction for an extending period of time. Despite the fact that the US-China trade war phase 1 deal was signed, new concerns about global trade thanks to geopolitical tensions and the coronavirus outbreak have investors looking for safe havens. 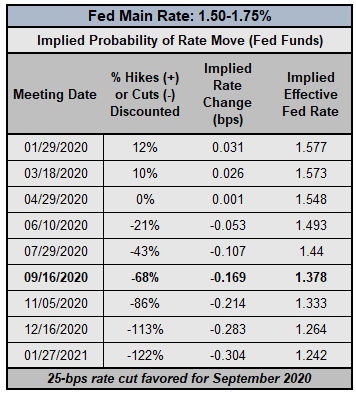 Fed Chair Jerome Powell has made clear that the Fed remains in a wait-and-see mode. According to Fed funds futures, there is a 12% chance of a 25-bps rate hikeat the forthcoming January Fed meeting. However, the rates pricing curve quickly shifts back towards cut territory by mid-year. September 2020 is the first month that sees an implied probability greater than 50% (current implied probability of 68% chance of a 25-bps cut), while a full rate cut is basically discounted by December 2020 (the current effective Fed rate is 1.55%; the forward rate for December 2020 is 1.26%, or -29-bps lower). 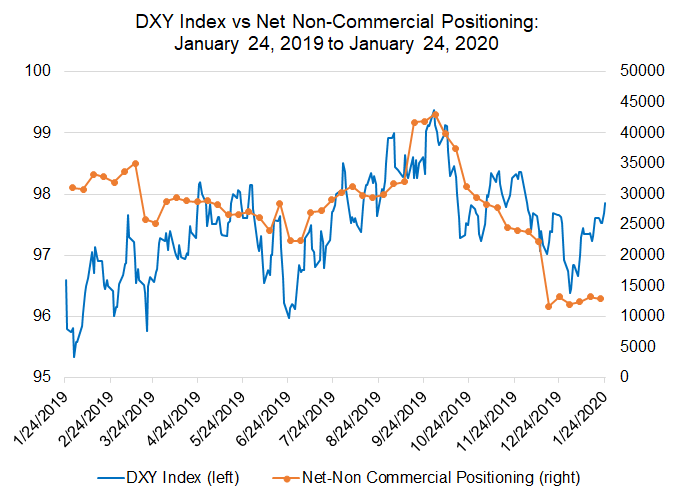 Finally, looking at positioning, according to the CFTC’s COT for the week ended January 21, speculators decreased their net-long US Dollar positions to 12.9K contracts, down from the 13.3K net-long contracts held in the week prior. Net-long US Dollar positioning has not moved in a material way for several weeks, even as the DXY Index has rebounded to its highest level since early-December 2019; for the week ended December 17, 2019, speculators held 11.7K net-long contracts.