Equities have found their footing once again, after wobbling quite a bit in September and October. The S&P 500 (SPY) has been up 9% in November alone, reaching an all-time intraday high on Monday. The “old economy” Dow Jones index (DIA) has been up even higher this month, +11%, with small cap stocks (IWM) beating the robust Dow by about one percentage point.

Today, I look at whether the recent trend is sustainable, and explore a potential opportunity in the iShares Russell 2000 Value ETF (IWN).

Despite recent strength in the stock market, tech, growth and quality have not performed quite as well in November. See graph below, and notice the bifurcation (cyclical and small cap to the upside, tech/growth and quality to the downside) since the last weekend. This is consistent with the comments that I made to my Storm-Resistant Growth community, on October 30:

I would guess that all risk assets crab-walk until at least a new/old US President is confirmed. At that point, political uncertainty should have subsided, and a stimulus deal will have been inked. Coincidently at that moment, the ‘shock’ of COVID-19 resurgence in Europe and in the US will have largely worn off, even if the pandemic continues. With the passage of time (i.e. next few months), we become closer to a vaccine, more effective treatment and instant testing, which all bodes well for the economy (especially value and small cap). 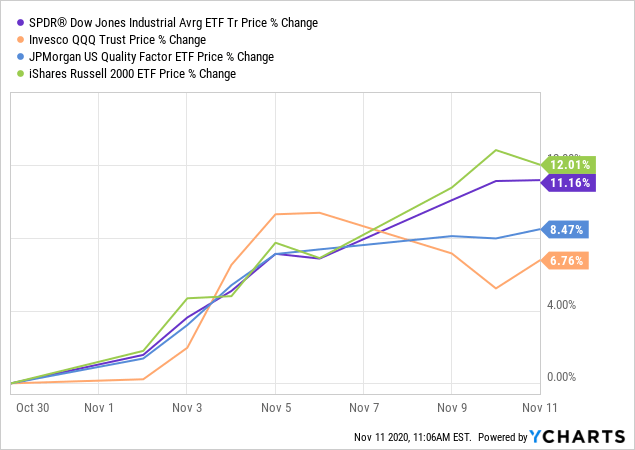 The narrative above has proven to be spot on, except for a couple of things:

One common instinct would be to either distrust the very recent rally in stocks altogether or to believe that reversion to the mean will favor tech and growth going forward. And in fact, when it comes to the short term, anything seems possible – hence this Wednesday’s rally in the Nasdaq (QQQ) that contrasted with a weak Russell 2000.

But over the longer term (say, next one to two years), I think that the trend is still highly favorable to cyclical and small cap. See graph below. It depicts a hypothetical long-short, market-neutral portfolio that is allocated as follows: 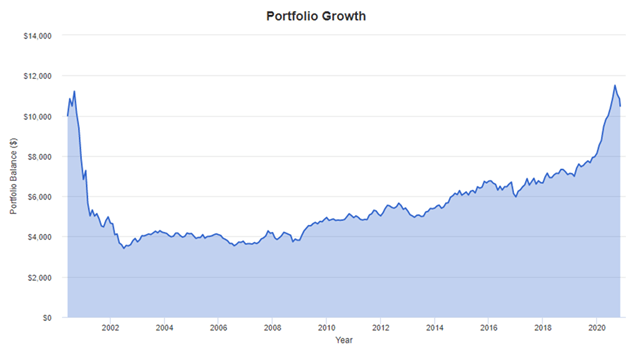 Yes, the past is not always a good indication of what will happen in the future. But the story here seems very compelling, and I think it flags the next move in the stock market.

Tech and growth were shaken to the core in 2000-2001, when the dot-com bubble popped. Since then, and even through the last recession, these factors have been winners, aided by the secular success story of Big Tech. However, the outperformance of tech and growth has gotten a little out of hand in 2019 and 2020, leading to the spike on the right hand side of the chart above.

I am not a chart reader, but a correction back to, at the very least, the old trend of 2008-2018 seems very reasonable to me. What makes my belief even stronger is the fact that macroeconomic factors also point to a recovery in cyclical and small cap:

How IWN can be used

The iShares Russell 2000 Value ETF would be one way for investors to play the potential upside in small cap and “old economy” stocks. The fund, managed by BlackRock (BLK), has a bit over $8 billion in assets under management, and trades approximately $175 million worth of shares each day, on average. Management fee of 24 bps per year is not at the lowest end of the ETF spectrum, but it is low enough to warrant further consideration.

Below is IWN’s portfolio composition. Notice that the fund is much more heavily allocated to traditionally cyclical sectors like financials and real estate than the Nasdaq – and even more than the Dow Jones index. This is a result of the ETF’s investment plan, described as:

To track the results of an index composed of small-capitalization U.S. equities that exhibit value characteristics.

Since IWN is so value-oriented (average P/E of 13.0x) and the fund’s median market cap is only $3.4 billion (vs. the S&P 500’s $25 billion-plus), the ETF would almost certainly be a beneficiary of a hypothetical rally in the value and small cap factors over the next several months. Whether such outperformance over the rest of the market will materialize remains an open question – but I feel rather confident that the chances are high.

Stocks have been on a very choppy ride in the past few months, and the future looks even more uncertain. But all my SRG portfolios have been beating the S&P 500 in 2020 and since inception, while also producing far superior risk-adjusted returns. To find out how I have created a better strategy to growing your money in any economic environment, click here to take advantage of the 14-day free trial today.

Disclosure: I am/we are long CALL OPTIONS ON SPY. I wrote this article myself, and it expresses my own opinions. I am not receiving compensation for it (other than from Seeking Alpha). I have no business relationship with any company whose stock is mentioned in this article.