The iShares PHLX SOX Semiconductor Sector Index ETF (SOXX) is a semiconductor ETF providing capped exposure to predominantly US-listed companies. The list of holdings includes some of the most high-profile chip names in the industry.

Buying into this ETF allows investors to benefit from each stock’s individual growth story while being paid a quarterly dividend.

Technologically speaking, the semiconductor (semis) industry is continuously evolving with chips being used in a wide range of product areas including computing, telecommunications, games, transportation, military systems and healthcare.

This means that SOXX’s performance is subject to the whims of the wider market, especially the part which focuses on semis.

In early September of 2020, the Semiconductor Industry Association (“SIA”) announced that worldwide sales of semiconductors for July increased by 4.9% compared to 2019. Sales figures for July were also 2.1% higher than the previous month. Therefore, sales progressed both on a year-on-year and quarter-on-quarter basis.

The data was compiled by the World Semiconductor Trade Statistics and represents a three-month moving average. For investors, SIA represents 95% of the U.S. semiconductor industry considered on a revenue basis and also nearly two-thirds of non-U.S. chip firms. 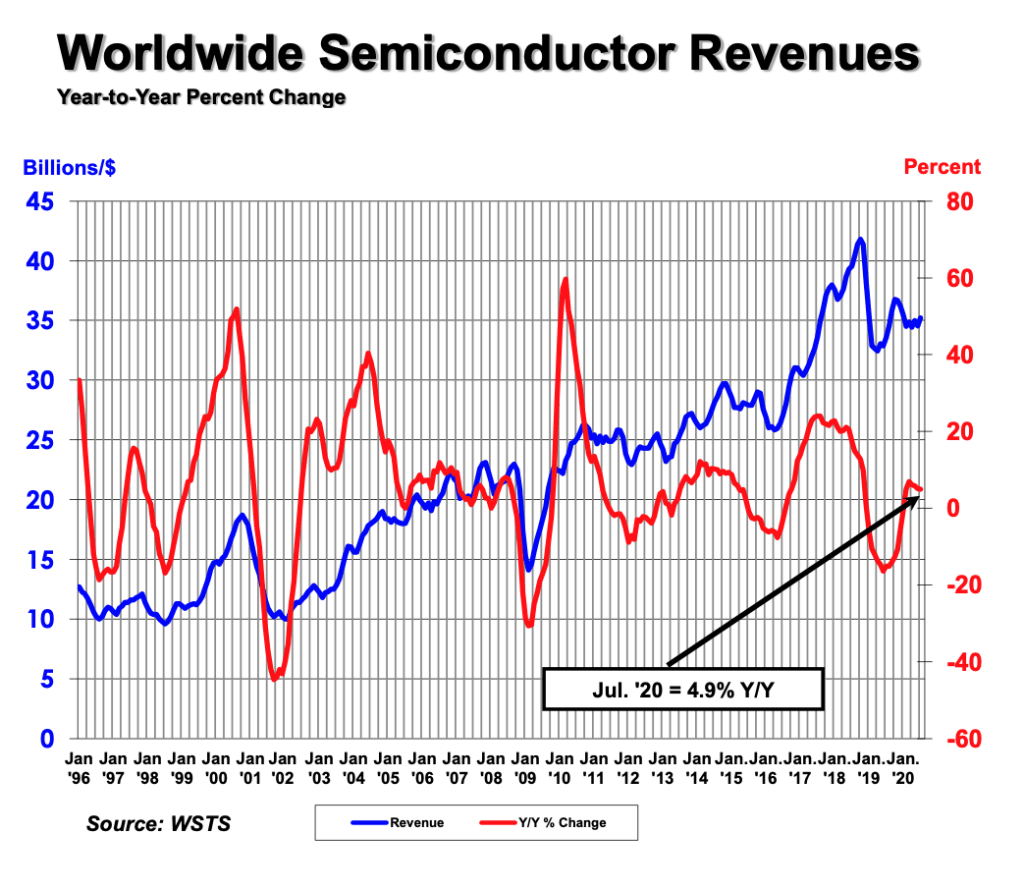 According to John Neuffer, SIA president and CEO:

Sales into the Americas remained strong in July, increasing 26 percent year-to-year, and year-to-year sales were up globally among both memory and non-memory products. The global semiconductor market has remained largely resistant to global macroeconomic headwinds through the first seven months of the year, with sales in July increasing on both a year-to-year and month-to-month basis, but substantial market uncertainty remains for the rest of the year.”

Therefore, the optimism was followed by some words of caution.

Continuing on a more cautionary note, according to a forecast by the International Monetary Fund, world gross domestic product could decline by 4.9% in 2020. Now, given that semis form an integral part of the economy, they will not be able to escape unfavorable market dynamics. In this case, while there has been a recovery in the third quarter for many mobile phone and car manufacturers, some analysts are questioning consumers’ willingness to spend a lot of money on new amenities amid an uncertain economic environment.

Yet, according to the World Semiconductor Trade Statistics, which in addition to providing statistics is also a forecasting institute, the global semiconductor market is expected to grow by 3.3% in 2020, to reach $426 billion. The forecast was done in June.

The organization further states that the global semiconductor market is projected to grow by 6.2 percent in 2021, driven by double-digit growth in memory chips. Also, according to the same forecast, all regions are expected to show a positive growth rate.

Therefore, there are conflicting outlooks.

However, if investors are prepared to take a longer-term instance considering that 6.2% growth for 2021, then an investment in SOXX makes sense. Also, as I had elaborated in my thesis on the Direxion Daily Semiconductor 3x Bull Shares ETF (SOXL) two weeks back, producers are now increasingly being solicited by telecom industry leaders as the higher speed 5G internet requirements call for developments at the chip level itself. Currently, it is the larger communications equipment manufacturers using the chips as components who receive most of the attention.

Now, I elaborate on the technical risks as well as alternatives to investing in SOXX.

In contrast to tech companies, the semiconductor industry is heavily concentrated and therefore the fund managers who manage the ETF’s underlying assets have their own specific strategy to manage the resulting “concentration risk”.

In the case for the SPDR S&P Semiconductor ETF (XSD), it is geared toward smaller growth companies which results in it being more volatile than the broader semiconductor market. In this case, the fund manager makes use of an equal-weighted strategy consisting of holding a large amount of stocks at an individual weight of around 4%.

Looking further, the VanEck Vectors Semiconductor ETF (SMH) has holdings consisting mostly of large caps numbering only 26, hence subject to more concentration risk than SOXX. SMH does not apply capping and therefore the weight of individual stocks can go higher than 10%.

As a matter of fact, the VanEck’s ETF has 11.5% exposure to Taiwan Semiconductor Manufacturing (TSM) which despite having posted upbeat Q3-2020 results with the full year’s revenue expected to beat expectations, remains subject to volatility risks as the trade war may come to the forefront after the relatively calm election period.

As for SOXX, it also holds large caps but applies capping whereby individual stocks can have weights only around 8%. This enables its portfolio to benefit from the relative stable growth of large caps while at the same time not being too exposed to any individual big name. 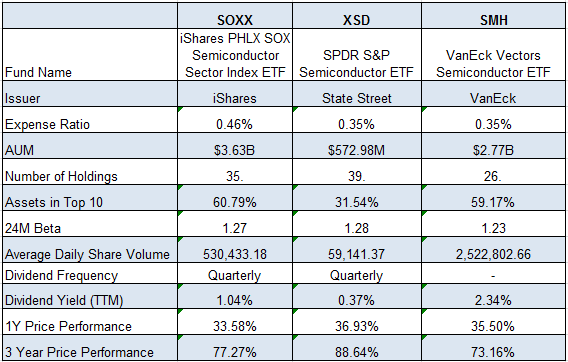 This said, SOXX also has a 4% exposure to TSM as well as European stocks through NXP Semiconductors N.V. (NXPI) and ASML Holding N.V. (ASML).

As for Intel (INTC), it has suffered from some post-earnings downgrade but there have been better results for other stocks in SOXX’s portfolio. 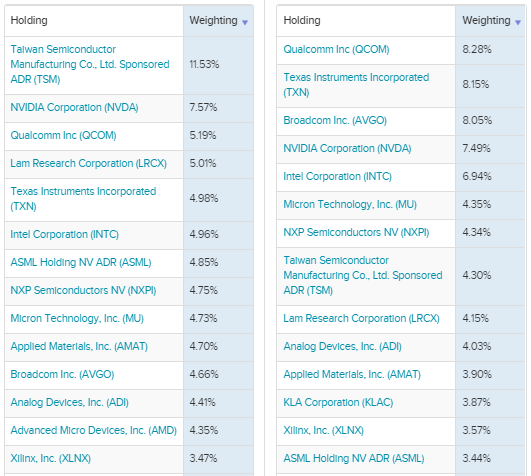 Therefore, SOXX provides sector exposure to the semis value chain including chip producers and chip equipment manufacturers. It is also easy to trade despite the expense ratio being higher and is also more suitable for investors who prefer to take advantage of diversification opportunities offered by an ETF without risking higher exposure to any particular company.

Investors should be aware that the semiconductor industry is cyclical and during times of high demand, a recovery can occur. There may also be supply shortages, leading to higher product prices and higher incomes for individual stocks. However, the opposite can also occur within a short span of time.

Thus, the profits of chip manufacturing companies can fluctuate rapidly.

Also, in the current economic environment, it is difficult to predict with certainty if the current cycle which currently shows recovery might end faster than expected.

This uncertainty is exacerbated by the “China” factor as many U.S. companies have manufacturing plants in China or make use of Chinese producers in their supply chains.

Interestingly, China is both a consumer and a supplier of semiconductors. First, as consumer, the country consumes more than half of all semiconductors manufactured in the world. However, the U.S. is embroiled in a trade war with China and one of the battlegrounds is restricting the actions of SMIC (OTCQX:SMICY), a Chinese producer of semiconductors through export limitations on chip equipment manufacturers like Lam Research (LRCX). However, given the importance of the semiconductor industry, which employs more than 250,000 people in the U.S., it is unlikely that the authorities will go to the extremes in terms of policy actions.

Still, volatility is here to stay.

In this case, some companies are still to report earnings and possible weakness in their fundamental metrics can induce volatility across the whole industry just like Intel two weeks back.

Consequently, absence of other M&A news, gloomy outlook by a major chip maker or a sudden demand weakness in China may lead to retrenchment to the $310-315 price range.

In this case, long-term investors may want to consider buying the declines as going into 2021, thanks to key secular trends in areas such as 5G, AI and high-performance computing. This means further growth for semiconductor manufacturers.

My long-term target for SOXX is $375-425 or a 15% upside by July 2021. However, the target could be reached faster in case there is a fiscal stimulus. With the Fed’s chairman Jerome Powell currently being the only market captain on board, it is difficult not to be bullish.

Also, at a P/E of 29, which is on the high side, SOXX provides investors with the ability to have a 7.5% exposure to the phenomenal growth story of NVIDIA (NVDA) which is trading at a P/E of 57. Moreover, SOXX also pays a dividend yield of 1.04% on a quarterly basis.

Additional disclosure: This is an investment thesis and is intended for informational purposes. Investors are kindly requested to do additional research before investing.