Investment thesis: the international environment is still dicey. While manufacturing has modestly rebounded over the last six to eight weeks, the coronavirus is straining global supply chains and suppressing consumer activity. While we haven’t seen any solid numbers yet, it’s safe to assume 1Q20 numbers will take a modest hit. Hold off on any new international moves for now.

The OECD LEIs point to modest, below-trend growth, but with one caveat (emphasis added):

Composite leading indicators (CLIS) designed to anticipate turning points in economic activity relative to trend six to nine months ahead, point to stable growth momentum, albeit below long-term trends, in the OECD area as a whole. However, these CLIs have been estimated using data collected before the WHO’s recent declaration of a public health emergency following the novel coronavirus outbreak in China. It is not yet possible to incorporate the potential negative impact of the coronavirus outbreak on global activity, particularly on supply chains and tourism linkages.

Here’s a table from the report:

The growth outlook for most regions is positive.

But that’s before the coronavirus, which has led to the following negative developments this week alone:

It’s looking like the manufacturing rebound is now in jeopardy, which places the latest LEI reading in jeopardy.

We’re seeing a continued push from central bankers regarding the need for fiscal policy.

The fiscal framework in Europe right now has its shortcomings. Fiscal policy is decentralised and there is a Stability and Growth Pact that limits the deficit to 3% of GDP and debt levels to 60% of GDP. In my opinion, it isn’t an effective framework for developing a countercyclical fiscal policy in the euro area. The ECB stresses that countries with fiscal space should use it to their advantage and take action. However, it’s often the case that countries with fiscal space don’t have the political will and countries with political will don’t have the fiscal space.

I share Mario Draghi’s view that the euro area needs a fiscal instrument that is institutionally independent and has the capacity and size to act countercyclically. Without such an instrument, it will be very difficult for the euro area to have a fiscal policy like that of other countries such as the United States.

As central bankers come to grips with a low-interest rate world, they’ve realized that they have a far more limited policy response to an economic downturn. This has led to a ramped-up communication effort asking for additional fiscal stimulus.

Taking the data from left to right:

The manufacturing/service sector split continues, with manufacturing either contracting or printing numbers barely over the 50 expansionary reading (while China’s numbers have increased recently, expect them to drop again due to the coronavirus outbreak). This slide from a speech by Masazumi Wakatabe shows the reasons: 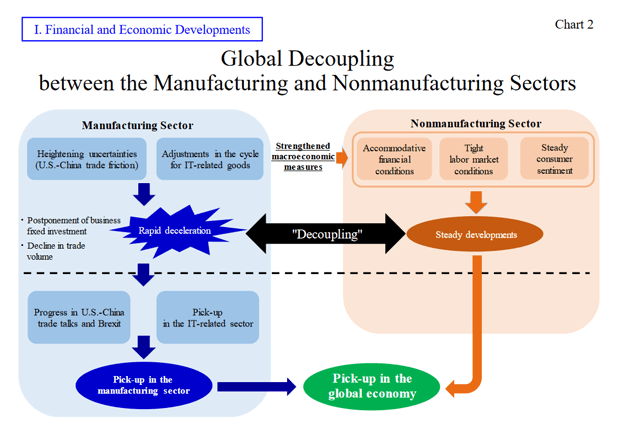 Manufacturing has been at the whim of the US-China trade war for the last 18-24 months, which caused a global slowdown. Meanwhile, the service sector continues to expand because it doesn’t sell goods.

Retail sales are expanding moderately, although Japan’s numbers are still a bit skewed due to the recent implementation of a higher consumption tax. Low unemployment rates across the developed world are supporting this.

Global industrial production has taken a bit hit due to heightened trade tensions.

Let’s take a look at this week’s performance tables:

Let’s start at the bottom. India lagged (again) as the country continues to struggle a bit for growth. Japan was also off a bit. Flipping to the top, the entire pacific region rebounded after the corona-virus sell-off a few weeks ago. China led the way higher, followed by the all-Asia ex-Japan ETF and Australia. After that come all the rest.

Finally, let’s look at the two-month charts for the above ETFs:

Let’s start with the positive: Canada (middle left) was rebounded to a two-month high and the US (bottom right) is also printing a high. All the other charts are showing some degree of coronavirus weakness. Some have mostly recovered (IEV, top right) but most others are still struggling.

See you next week.

Sundry Photography Overview This post serves as an update to my coverage in late September. Zillow Group (NASDAQ:ZG) (NASDAQ:Z) is still undervalued and could provide attractive returns. I continue to believe that ZG’s true value […]