As the coronavirus threat begins to fade, investors remain laser-focused on the next scary event which could potentially upend the financial market. This obsession for finding the hidden weakness within an otherwise healthy bull market has served the bulls well, however, as the market’s nervousness has fueled short-covering rallies on a rolling basis for the last several months. In this report, I’ll make the case that investors’ fears show no sign of abating anytime soon, which means stocks will continue to rise when worst-case scenarios don’t come to fruition.

If one could narrow down the most dominant theme on Wall Street over the past couple of years, it would have to be the tendency of investors to constantly search for the next “black swan” event. This famous term was coined by Nassim Taleb in 2007 to describe improbable or unpredictable events with the potential to create chaos within any given system. The most recent example of a black swan, of course, is the coronavirus outbreak in China. Until last week, many investors – both retail and institutional – expressed genuine concern that the virus could seriously undermine China’s manufacturing outlook and, by extension, the global economy.

In the last few days, though, the market has come to realize that the threat to China’s economy was almost certainly overstated. JPMorgan analysts recently noted that the virus’ threat to China’s manufacturing output is likely to be less than initially feared. Meanwhile, major Chinese tech manufacturers, including Foxconn, have gotten approval from the government to resume operations as a growing number of China’s companies return to production.

Large-cap China ADRs are also acting as if the worst-case outlook has already been priced into the market. Below is the daily graph of the iShares China Large-Cap ETF (FXI); as of February 12, the ETF has recovered more than half its losses thanks to the market quickly reassessing the economic hazard posed by the health scare. I would emphasize that in the vast majority of cases, a news-driven market decline recoups its losses in short order once the initial panic dissipates. It certainly looks like that’s the case here with China’s stock market rebound.

Another sign that the panic mentality recently exhibited by black swan-obsessed traders is diminishing can be seen in the next chart exhibit. This shows the fast rise (and equally fast drop) in the CBOE Volatility Index (VIX) over the last few weeks. The VIX one of Wall Street’s favorite fear gauges, and last month’s volatility spike was an accompaniment to the spreading coronavirus. Now that enough time has passed for cooler heads to prevail, the VIX has since fallen below its 15-day trend line and is returning to the lower boundary of the trading range established over the last few months. This is a manifest token that a normal, healthy environment for equities is reasserting itself. 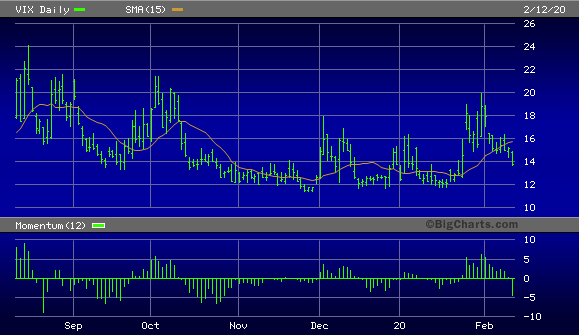 I would also point out that at no time during the height of the coronavirus panic did the VIX rise above the pivotal 20.00 level. This is technically significant, for history has shown that whenever VIX is above 20.00, buying stocks becomes a dangerous proposition. A VIX that remains well below the 20.00 level, by contrast, is far more conducive for the bullish case.

Even more tellingly than volatility is the fact that corporate insiders didn’t hit the panic button during the worst part of the health scare. This conclusion is based on the last few weeks’ readings of the Thomson Reuters Insider Transactions Ratio as reported each week by Barron’s. This tool is a measure of how bullish or bearish informed investors are on the stock market from week to week. 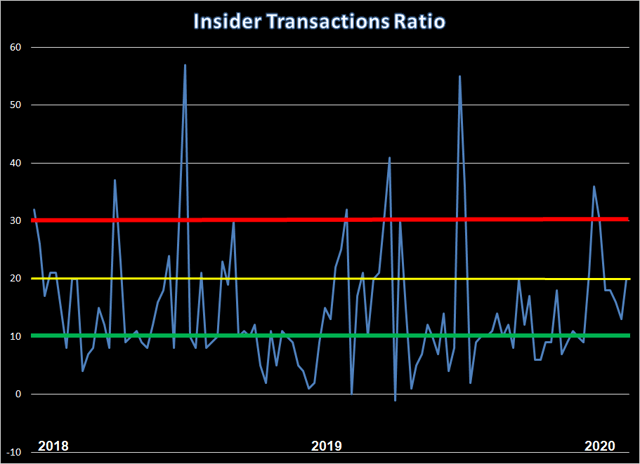 As the above graph shows, only at the end of 2019 was there a temporarily bearish spike in insider selling levels. This could have been influenced by year-end tax-related selling, however, but the ratio quickly returned to a bullish series of readings in January. In the latest week, the Insider Transactions Ratio gave a neutral reading (yellow horizontal line). In any case, insiders don’t seem very concerned about the potential for a black swan event like coronavirus to roil the stock market.

Not to minimize the toll on human health the virus has already taken, I would point out that financial markets have likely already discounted the worst-case scenario. Indeed, the bloodless verdict of the market is obvious: the U.S. equity bull market is still alive and likely to continue in the months ahead. Informed investors didn’t panic during the recent global health scare, and those that did panic have evidently repented their decision to dump stocks based on recent market action.

Perhaps the most important takeaway from this survey of the latest news-driven market event is that, with investors still obsessed with finding the next black swan event, the market will have a built-in support in the form of a continued expansion of short interest levels. This short interest will in turn serve as fuel for continued rallies in the coming weeks once traders realize their fears were misplaced and are forced to cover those bearish positions. In view of all that we’ve discussed here, therefore, a bullish intermediate-term (3-6 month) outlook toward equities is still warranted.