Lowe’s (LOW) is an all-time favorite stock of investment legend Bill Ackman of Pershing Square (OTCPK:PSHZF). Recently I’ve taken a shine to it as well. It has a sizable moat and its cash-generating ability is awe inspiring. Third quarter figures will be released this week and they are looking to be good. Given the performance during Corona-times and the relatively cheap valuation, it might be a great time to improve your portfolio by buying Lowe’s.

Most people reading this are probably familiar with Lowe’s. It’s pretty much a household name. But buying a stock is buying a piece of a company, so knowing what you’re buying into is essential. Lets see what Morningstar says about Lowe’s:

Lowe’s is the second- largest home improvement retailer in the world, operating about 1,970 stores throughout the United States and Canada. The firm’s stores offer products and services for home decorating, maintenance, repair, and remodeling. Lowe’s targets retail do-it-yourself and do-it-for-me customers as well as commercial business clients. We estimate that Lowe’s captures a mid-double-digit share of the domestic home improvement market, based on U.S. census estimates for market size.

So the business model is plain and simple; if you’re looking to do some work in and around the house, Lowe’s is the place to be. Well, there is just one competitor bigger. This is the Home Depot (HD). Revenue for the Home Depot is about 1,5 times that of Lowe’s. Just to give an idea about how much bigger it is. It would be reasonable to say that the two operate as a sort of duopoly, based on their market share and scale advantages. Together they control nearly half of the market with the Home Depot holding 29 percent market share and Lowe’s 19 percent.

This scale is a big reason why Lowe’s has a wide moat. Like many in many industries the largest players can get competitive advantages that come with huge scale. Think of lower cost of capital, more bargaining power with suppliers and, perhaps most important, the ability to keep prices the lowest. A classic example of applying this has been Walmart (WMT), which has become the huge company it is today thanks to this principle. Many people always reason that when a company takes a significant part of the market, that they will raise prices after this market grab. But the opposite is true. Raising prices will invite competition. Jeff Bezos famously said “your margin is my opportunity.” By watching after their moat, Lowe’s has been a multi-decade winner and will likely continue to be one.

How has this enterprise fared during the last decade? Well, pretty good:

From under $22 dollar a share to close to $160 dollar is a return people sign-up for. Including dividends the return has been even greater. That all while the drawdowns have been rather limited. It all points to a great company.

Let’s start the financials off by looking at the income statements produced the last ten years: 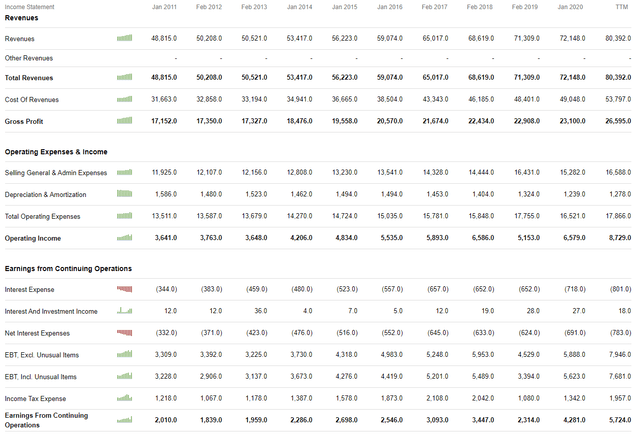 Lowe’s income statement is, if anything, highly predictable. Revenues are each year a bit higher than the year before. Over a ten year-period this results in over 60% revenue growth. Cost of revenues as a percentage of revenue has moved within a small band of about ~64 to ~68 percent. Operational income has however grown faster. This has grown from 3641 mUSD in 2011 to 8729 mUSD TTM. The main reason for this is that selling, general and administrative expenses have taken less of a bite out of the revenue. Depreciation and amortization is as an absolute figure even lower TTM than a decade ago. The result is that the operational margin has grown over 300 basis points. Down the line, net income is close to having tripled during the period shown. But the EPS figures are even better and the reason is clear. The number of shares outstanding has been brought back in a massive way. From 1401 million in 2011 to 760 million as of the last financial report. And they are still reducing shares. 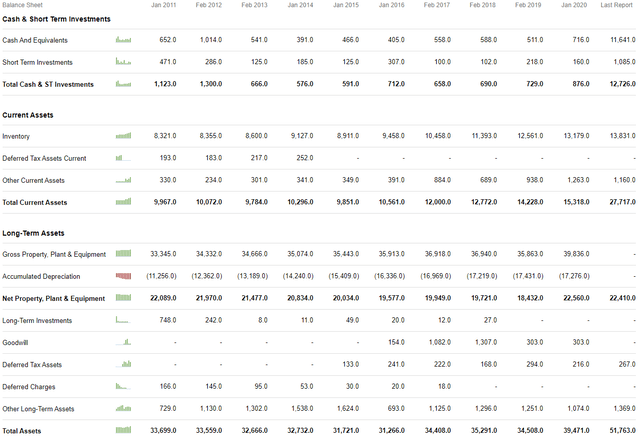 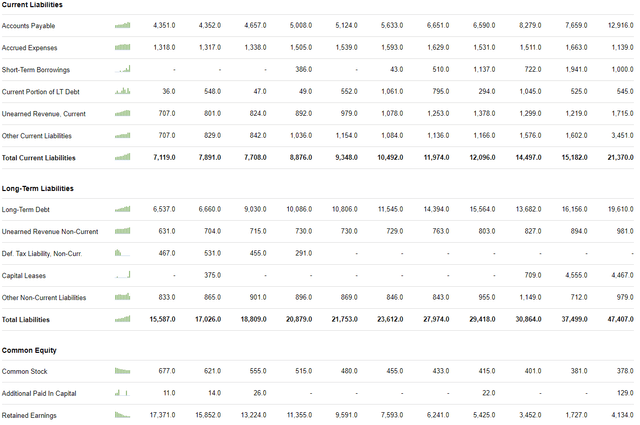 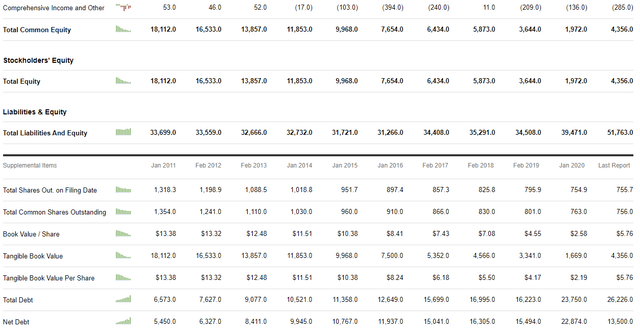 Current assets have slowly grown over the years for Lowe’s with them being about ~50 percent higher at the end of the last fiscal year compared to ten years ago. These current assets are well managed compared to the current liabilities; in most years they are slightly larger. Since the start of the pandemic this has changed drastically. Current assets are up over 80 percent, from 15.318 mUSD at the start of 2020 to 27.717 mUSD at the time of the last report. This is a far greater rise than the current liabilities during that period. This is a clear move to bolster up the balance sheet and be prepared for challenging times. Besides the current assets, the other assets mainly consist of property, plant and equipment. The lack of large amounts of goodwill is a testament to the fact that Lowe’s primarily relies on organic growth. Which I think is in the vast majority of the cases the best way to expand.

On the liability side we see that both current and total liabilities have about tripled during the period shown. A large portion of this growth has happened somewhat recently due to the addition of capital leases and extra debt to boost liquidity. Equity on the other hand has gradually shrunken. This trend can also be spotted at Home Depot. The reason for this is clear: the massive amounts of buybacks. I don’t consider this to be that damaging to the strength of the balance sheet. Mainly because of the massive earnings potential. Just look at how net debt has developed from January 2020 to the last report. Over 9 bUSD cash has been added in H1. All else being equal, the net debt could turn into a net cash position within a year. 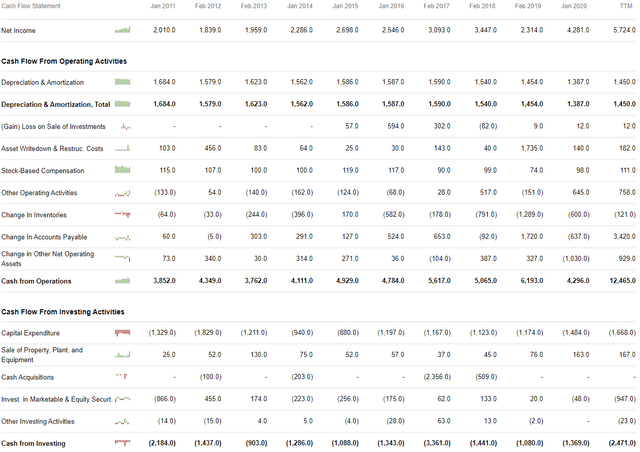 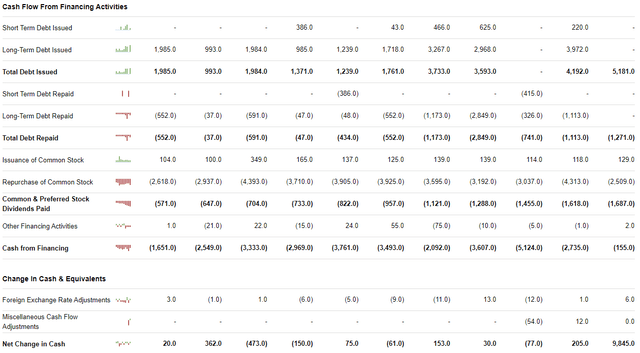 With one glance it can be seen that Lowe’s cash from operations is higher every year than its net income figure. Over the years cash from operations has gradually increased, but the last half a year has seen it explode. The result is that cash from operations has more than tripled. The cash that comes in from the operations is each year more than enough for the capex. For a company of this size, investing activities are quite light. M&A does happen from time to time, but the acquisitions don’t really move the needle that much. Cash is mostly used to reward shareholders. Even debt is taken on to do so. This results in large amounts of buybacks and dividends. For dividend growth investors the company is a good choice since they increase them each year by a decent percentage.

At the moment Lowe’s has a market cap of about 120 bUSD. This is well below that of competitor Home Depot, which comes in at 298 bUSD. But does that make the company currently a buy? 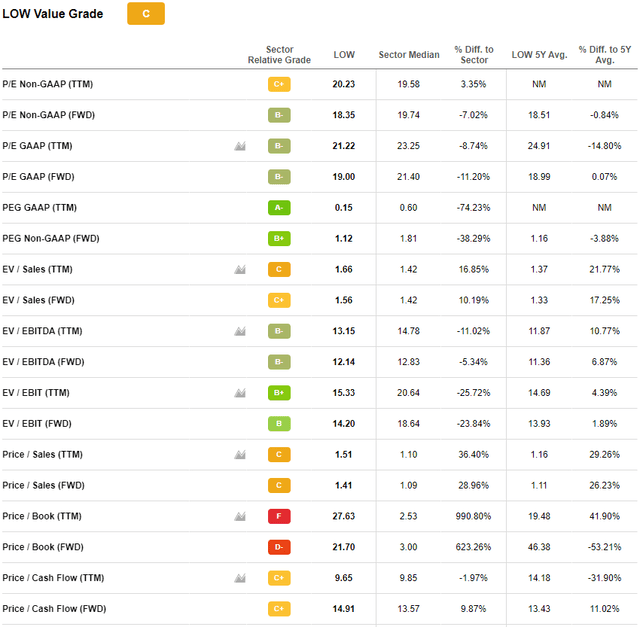 Compared to Lowe’s five year average, the stock currently trades mixed on several metrics. For example looking at P/CF it’s below average, which I find rather appealing. But on other metrics such as sales, it’s more expensive now than its historical average. The peer group might not be a good comparison. Besides Home Depot, the peer group is made up out of Target (TGT), Leggett & Platt (LEG), TJX (TJX) and Nike (NKE). So that’s an apples and oranges story. So let’s put it up against Home Depot: 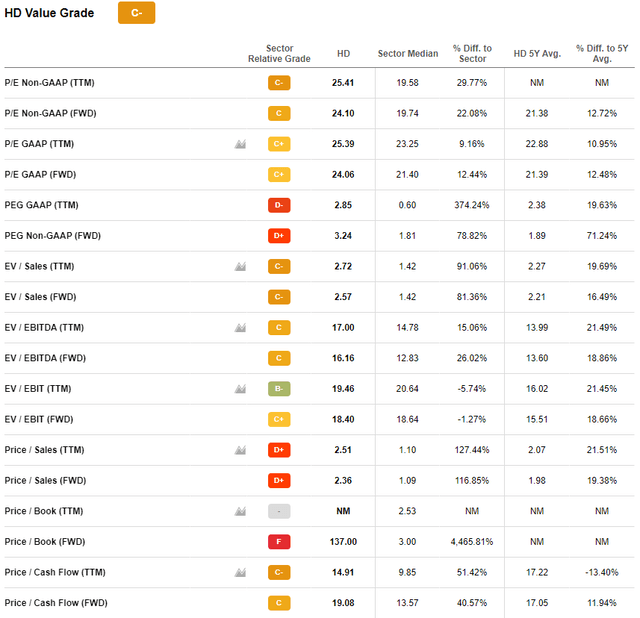 Here we see that Lowe’s really is the cheaper option. P/E, P/CF, PEG and Sales ratios are all lower for Lowe’s. If Lowe’s would be able to trade at Home Depot’s multiples, it would mean a big increase in share price. This seems a realistic option to me. All in all I’d say that at current valuation Lowe’s looks rather good. For a quality company to trade under ten times cash from operations, that’s something I’m buying. A final remark on this is that I do think that the current cash flow from operations will return to mean once things start to normalize in a post-Covid world.

Like any investment, Lowe’s comes with its risks. One could come from the changes in the retail landscape. Companies such as Amazon (AMZN) have disrupted a vast segment of the retail business and this could happen to home improvement too. Lowe’s has an omni-channel approach and already sells online, but that doesn’t mean a competitor could come in and grap market share. Given the nature of the home improvement business, I personally think it’s a bit harder to disrupt, but still possible. Another risk could come from an eroding moat. If Lowe’s were to neglect its strength such as its scale, this could really hurt the business. Keeping prices competitive is key here. A third risk comes from the housing market. Since Lowe’s is greatly connected to this market, a slowdown there would damage the bottomline. Currently the housing market looks stronger than during the last crisis, but a long term recession could spillover.

Lowe’s is a growing wide-moat company that’s currently attractively priced. Together with Home Depot, they control a large portion of the home improvement market. Lowe’s is however better priced at this point in time. The Covid-crisis has added to Lowe’s already impressive cash generating ability. At ten times operational cash flow, now might be a good time to add Lowe’s. Lowe’s is a buy.

Disclosure: I am/we are long LOW. I wrote this article myself, and it expresses my own opinions. I am not receiving compensation for it (other than from Seeking Alpha). I have no business relationship with any company whose stock is mentioned in this article.

Kirkland’s Inc. (NASDAQ:KIRK) has had a great run this past year, but the valuation is starting to look expensive. The company was due for a bounce after having a terrible 2019 fiscal year where the […]